A recent “Hominid Hunting” feature at Smithsonian.com summarized the current controversy among anthropologists regarding the place of Homo antecessor in human lineage. But, like evolutionary anthropologists, the columnist really asks the wrong question—a question based on scientifically unverifiable assumptions.

Homo antecessor fossils have been found in two locations in Spain’s Atapuerca Mountains, whose caves and railroad cuts have yielded a variety of human fossils. Eighty fossilized bones belonging to six individuals were found there in Gran Dolina cave in the mid-1990s. A matching partial jawbone was found at Sima del Elefante in 2008, along with dozens of stone tools. With conventional dates of 800,000 and 1.2 million years respectively, the sites’ fossils didn’t really match any other human fossils perfectly and were therefore assigned a new name, Homo antecessor. 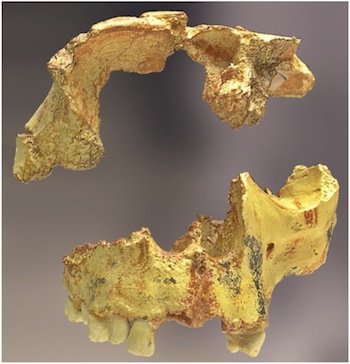 This partial Homo antecessor skull was found in Gran Dolina cave in Spain’s Atapuerca Mountains. Many evolutionary anthropologists think this human species was the first to arrive in Europe and debate where it fits in human evolutionary ancestry. Yet what they already assume actually determines their conclusions. The existence of human variations in the Pleistocene fossil record does not demonstrate human evolution but only human variety. Image credit: José-Manuel Benito/ Wikipedia.

Homo antecessor’s features include traits evolutionists consider primitive combined with modern ones. The teeth seem like those of Africa’s Homo erectus, which evolutionists date at around 1.5 million years. But the shape of the nasal area and a depression in the jawbone near the canine teeth are consistent with the bones of modern humans. Anthropologists therefore debate where in the evolutionary history of humans to place Homo antecessor.

Homo antecessor is supposed by some scientists to be the common ancestor of Neanderthals and humans.

Homo antecessor is supposed by some scientists to be the common ancestor of Neanderthals and humans. Others believe Homo heidelbergensis was the common ancestor. Homo heidelbergensis, whose fossils are also found in the Atapuerca Mountains in La Sima de los Huesos as well as in Germany, England, Greece, and China, has features similar to but less prominent than Neanderthals. (There is debate among prominent evolutionists about the classification of the bones in La Sima de los Huesos, however, with London’s Natural History Museum’s Chris Stringer declaring they’ve been misidentified.) Most evolutionary anthropologists believe Homo antecessor evolved after (and likely from) Homo erectus, but where the family tree went from there remains a matter of debate.

An additional difficulty in sorting out the evolutionary story involves the fact that the vast majority of existing Homo antecessor fossils are children’s bones. Children’s bone structure can change dramatically by adulthood. Neanderthal children, for instance, did not have brow ridges. Therefore, some evolutionists prefer to leave a question mark beside this Homo species until more adults are found.

Stringer, the Natural History Museum’s Research Leader in Human Origins, has commented—with regard to the fossils in La Sima de los Huesos—“If we cannot correctly fix the age and identity of the remains then we are in trouble. Getting that wrong even affects how we construct our own evolution.”

Notice the implication of Stringer’s words: evolutionists do “construct our own evolution” based on what they believe about the age and identity of fossils. Yet the age of fossils is derived from a number of unverifiable, uniformitarian, worldview-based assumptions. However, models based on biblical history explain the layers in the geologic column. Animals do reproduce “after their kinds” just as the Bible reports God created them to do, and they have never been observed evolving into new and more complex kinds of animals. Likewise, no ape-like ancestry for humans has ever been demonstrated, only a variety of ape fossils that evolutionists prefer to think of as evidence of transitions to human forms.

Evolutionary anthropologists assume that hundreds of thousands of years elapsed between the evolutionary advent of various Homo species on the earthly scene. And they assume that humans must have gradually evolved from ape-like ancestors and through a series of progressively less primitive human forms. Therefore they debate where on the evolutionary scale human variants should be placed. They automatically assume that evolution happened and simply try to play a game of comparing similarities and differences to get the order right. But they are asking the wrong question. The existence of human variations is not evidence that humans evolved through an evolutionary sequence. A better question would involve an exploration of the diversity among humans descended from Noah’s family after the tower of Babel.