by Troy Lacey on May 17, 2019
Featured in Answers in Depth
Share:
Email Using:
Gmail Yahoo! Outlook Other

The first Denisovan fossil outside Siberia has been found. While anthropologists are excited at the find, the location of the fossil in Tibet raises some puzzling questions for the evolutionary view. Secularly dated around 160,000 by flawed radiometric dating methods and with Denisovans often described as archaic hominins or evolutionary cousins to modern man, what are Christians to think of this mysterious people group? From a biblical perspective, this is a post-Babel (and completely human) fossil, which makes much more sense of the data. This fossil may also give us clues into which of the sons and/or grandsons of Noah could have been the father of the Denisovan line.

A recent news release covered the analysis of a fossil mandible (lower jawbone) which had originally been discovered in 1980.1 The mandible was discovered in a cave on the Tibetan Plateau in Baishiya Karst Cave, Xiahe, Gansu, China, and was subsequently donated to Lanzhou University. In 2010 researchers from that university revisited the cave and started conducting research there. Subsequent excavations revealed the presence of stone artifacts and cut-marked animal bones.

DNA testing on the jawbone yielded no DNA (which just shows how difficult it is to find intact DNA). But proteins in the dentine of the teeth were found, and lab analysis revealed them to match most closely with Denisovans. This marked the first finding of a Denisovan fossil outside of Denisova cave in Siberia. The jawbone also contained an adhering carbonate crust (basically some of the limestone from the cave “stuck” to the jawbone), which was U-Th dated to 160,000–170,000 years. According to the Nature journal paper’s contributing author Dongju Zhang in his ScienceDaily interview,

Archaic hominins occupied the Tibetan Plateau in the Middle Pleistocene and successfully adapted to high-altitude low-oxygen environments long before the regional arrival of modern Homo sapiens.2

According to another contributing author, Jean-Jacques Hublin, “Our analyses pave the way towards a better understanding of the evolutionary history of Middle Pleistocene hominins in East Asia.”3 But much of the actual data analyses from the jawbone are consistent with Neanderthals, other humans, and “Middle Pleistocene specimens” as this paper terms them, or post-Babel Ice Age humans as we would call them. A couple of quotes from the journal article will show this.

The primitive morphology of the Xiahe mandible is confirmed by geometric morphometric analysis, in which it falls within the sample of Middle Pleistocene specimens and at the limit of the Homo erectus distribution, close to the Chinese Lantian and Zhoukoudian GI/II and H1.12 specimens. By contrast, it is well-separated from H. erectus in the geometric morphometric analysis of dental arcade shape; it is less elongated than H. erectus and plots close to primitive specimens of Middle Pleistocene hominins, Neanderthals and H. sapiens. The dental morphology also fits within Middle Pleistocene hominin variability.4

In addition to mesial and distal plate-like roots, there is a prominent accessory lingual root that branches off the mesial root below the cervix. This feature is of particular interest as three-rooted mandibular molars are very rare in non-Asian H. sapiens but appear much more frequently in recent Asian populations.5

We Beg to Differ

Denisovans are not going to provide a better understanding of any “evolutionary history,” but they can provide us with a glimpse of post-Babel migration

We’ve mentioned the inherent assumptions built into radiometric dating many times, and this case is no different. Denisovans were post-Babel humans (not some evolutionary “cousin” to modern humans), and this fossil can be assigned to no earlier than the post-Flood Ice Age (c. 2200–1800 BC). Denisovans are not going to provide a better understanding of any “evolutionary history,” but they can provide us with a glimpse of post-Babel migration (more on that below).

It has been known for several years that Denisovans contributed a variant of the EPAS1 gene to modern-day Tibetans, which allows for high-altitude tolerance. But this new fossil find is significant because it demonstrates that Denisovans made it to Tibet and shows that they could and did survive at higher altitudes. The cave where the jawbone was found was 3,280 m. (10,761 ft.) above sea level, whereas the Denisova cave is only 700 m. (2,296 ft.) in elevation. The Nature research paper highlights how the evolutionary story has been a puzzle regarding a Siberian origin for Denisovans:

This Denisovan-derived adaptation is currently difficult to reconcile with the low altitude of Denisova Cave (700 m altitude) and the earliest evidence of a high-altitude presence of humans on the Tibetan Plateau around 30–40 thousand years before present.6

The Bible as a Historical Record

To understand this from a post-Babel migration aspect, one plausible explanation is to look at the sons and grandsons of Japheth, who colonized much of Europe and parts of Asia. Japheth’s sons Gomer, Magog, Tubal, and Meshech, and Gomer’s son Togarmah all migrated to parts of Russia, Georgia, Azerbaijan, Armenia, Afghanistan, Pakistan, Kazakhstan, Turkmenistan, Mongolia, and parts of China. While any one of these sons of Japheth and even a few sons or grandsons of Ham could be in the mix for Denisovan ancestry, one seems to stand out as more feasible. Looking over the most likely migration routes according to the Genesis 10 “Table of Nations,” it is quite possible that the Denisovans were descendants of Gomer’s son Togarmah, whose clan, after settling regions in the Altai and Ural mountain regions, would have passed through Tibet, and some descendants would have eventually ended up in Siberia (see Figure 1 below). 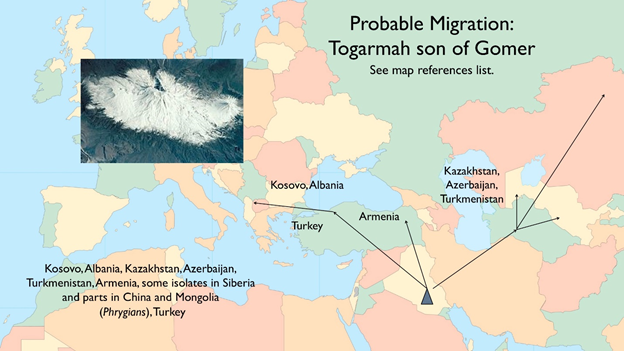 rather than postulating a reason for lower-altitude Siberians to pass along a high-altitude gene variant to Tibetans, this biblical model shows the exact opposite is the case

This people group would have been acclimatized to high altitudes long before they reached both Tibet and Siberia. Most likely as this post-Babel group became isolated, limitations in genetic variability combined with other genetic phenomena such as mutations and founder effects produced a population with this variant EPAS1 gene. This also explains the locale of the Denisovan fossils (to date) and genetic markers in current populations across Asia and Melanesia much better than the evolutionary story. The Siberian population of Denisovans had already acquired the variant EPAS1 gene, even though they didn’t need the high-altitude benefits it provided. So rather than postulating a reason for lower-altitude Siberians to pass along a high-altitude gene variant to Tibetans, this biblical model shows the exact opposite is the case: As Togarmah’s tribe migrated away from Babel, they traveled northeast through western Asia, going through Tibet and into Russia and Siberia.

Quite probably, some of Togarmah’s tribe intermarried with Hamitic tribes, likely the Sinites, and this group would have splintered off in Afghanistan or Pakistan and spread southward toward Southeast Asia and Melanesia. But the Denisovan genetic markers would have been retained as they made their way southwards. The post-Babel dispersion model fits well with the genetic reach of the Denisovan population.

Dr. Georgia Purdom, Bodie Hodge, and Avery Foley commented on this news item on Answers News on May 13, 2019 at the Creation Museum. Watch their report here: