Building Nutcracker Man from the Ground Up

New “Nutcracker Man” is a mosaic of evolutionary assumptions and reality.

Like Mr. Potato Head™ toys with missing limbs, Paranthropus boisei—aka “Nutcracker Man”—has long been built from a couple of skulls and a good bit of imagination. For years, fragmentary body parts attributed to “Nutcracker Man” have fueled assertions about how it lived. Whether those bones actually belonged to Paranthropus boisei, however, has remained a matter of dispute. (Experts have provided “a sustained and compelling deconstruction of previous claims of postcranial [body] fossils of P. boisei,”1 researchers of the latest study on PLOS-One explain, declaring them all “dubious.”2)

An Arboreal Body For P. boisei

Newly discovered body parts have now enabled anthropologists to build a more realistic body for Paranthropus boisei. Recovered in the same region of East Africa as the original skulls, the new specimens include pieces of two arm bones, two leg bones, and nine teeth. The teeth seem to have come from a single individual, a reasonably close match for Paranthropus boisei, so the limb bones found with them presumably came from it too. The resulting new body-for-boisei does not, however, fit the lifestyle previously imagined for Paranthropus boisei. Rather, the parts seem to have belonged to a powerful creature well-equipped for arboreal life.

“This is the first time we've found bones that suggest that this creature was more ruggedly built—combining terrestrial bipedal locomotion and some arboreal behaviors—than we'd previously thought,” says anthropologist Charles Musiba, coauthor of the paper in PLOS-One. 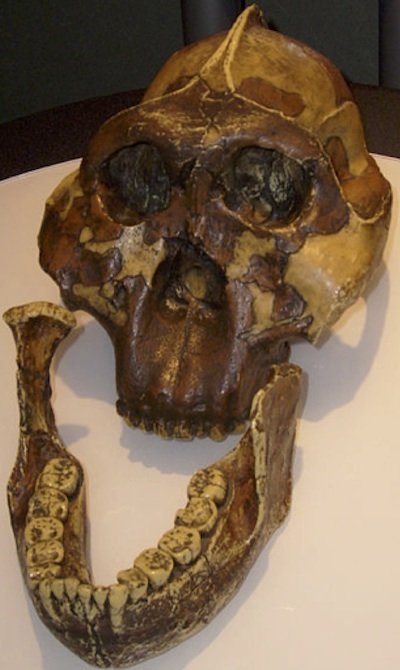 This is a cast of the “Nutcracker Man” cranium originally discovered in 1959 by Mary Leakey along with a robust jaw found later. Despite the massive teeth and jaw and the gorilla-like sagittal crest, evolutionary anthropologists believe this fossil came from a side-branch of the human evolutionary line. Many other bones have been dubiously associated with skulls like these over the years, leading to incorrect conclusions about the Paranthropus boisei’s probable lifestyle. Image by Durova, via Wikipedia Commons.

Mary Leakey found the original Paranthropus boisei skull in northern Tanzanian Pleistocene rock in 1959. The Leakeys dubbed it “Dear Boy.” Their son Richard Leakey dug up a second skull a decade later. He thought the skull’s owner had been the earliest user of Oldowan tools, which were found in the same region. However, the coexistence of Homo fossils with the tools and the Paranthropus skull call that notion into question. Many of the other mammalian animal fossils excavated with Paranthropus fossils have evidence of butchery on their bones. The newly discovered bones suggest their owner also met a violent end. We naturally must wonder which end of the tools “Nutcracker Man” was on. Perhaps he was not so much making dinner as he was being dinner!

Those body parts that have in the past been “dubiously” assigned to Paranthropus boisei resemble those of a more lithe version of Australopithecus afarensis (aka Lucy). Most evolutionists claim Lucy was bipedal—another quite dubious claim discussed extensively in “A Look at Lucy’s Legacy” and “Lucy, the Knuckle-Walking “Abomination”?” Therefore, evolutionary anthropologists generally believe Paranthropus boisei was a bipedal side-branch on the human ancestral tree. Paranthropus boisei supposedly evolved as a slender descendant of an australopithecine about 2.3 million years ago and went extinct about 1.2 million years ago.

“It's a different branch on our ancestry tree,” Musiba says. “It came later than the other hominins, so the question now is ‘what happened to it?’”

The cranial capacity of the Paranthropus boisei skull found by Richard Leakey was only about 510cc, minimally larger than an australopithecine’s. This size is far below the normal for humans but typical for a great ape.

Paranthropus boisei had large teeth and a sturdy crested gorilla-like skull with a wide face to accommodate those big teeth and large chewing muscles. Wear patterns on the molars seemed to suggest the animal continually chewed on hard foods. Therefore, Paranthropus boisei came to be known not as “Dear Boy” but as “Nutcracker Man” on the assumption that his massive chompers had evolved to eat nuts, seeds, and hard fruits. More recent studies of food residue in Paranthropus boisei teeth, however, show that it actually ate a softer diet, skipping the nuts and probably majoring on tropical grasses and sedges.

“The more we are finding of these fossils, the more we are learning about the history of these species,” explains Musiba. With a height between 3.5 and 4.5 feet, its arm bones are far more robust than anyone previously suspected. This suggests Paranthropus boisei had a powerful upper body just perfect for hoisting itself around a forested environment.

To maintain their contention that Paranthropus boisei was a bipedal descendant of a supposedly bipedal australopithecine, anthropologists must contend that our supposed cousin Paranthropus boisei was as at home in the trees as on the ground. “It seems,” explains Musiba, “to have more well-formed forearm muscles that were used for climbing, fine-manipulation and all sorts of behavior.”

“We’re going to do more work on biomechanics and see what else this creature was doing,” Musiba says. “We are starting to understand the physiology of these individuals of this particular species and how it actually adapted to the kind of habitat it lived in. We knew about the kind of food it ate—it was omnivorous, leaning more toward plant material—but now we know more: how it walked around and now we know it was a tree climber. We know that it was very strong. It’s unprecedented to find how strong this individual was. The stronger you are the more adaptive you are.”

These bones—a piece of a thigh bone on the left and a piece of a forearm bone on the right—were found with nine Paranthropus boisei teeth in Tanzania’s Olduvai Gorge. Teeth marks and crenulations—scallop-shaped teeth marks on a broken bone’s end—evidence the damage inflicted on the thigh bone by a carnivorous animal as does the type of fracture found on the arm bone. Despite the evidence that this creature lost its battle with a powerful beast, the remarkably thick cortical bone suggests Paranthropus boisei was itself well-equipped for swinging through the trees. Scale mark=1 cm. Image by M. Dominguez-Rodrigo et al., via PLOS-One.3

The owner of the four limb bones was likely quite strong, Musiba and colleagues believe, because the outer (cortical) layer of bone was quite thick, much thicker than that of modern humans. Prior to this discovery evolutionary anthropologists thought Paranthropus boisei was a “gracile australopithecine.” The authors of the study conclude that their work shows Paranthropus boisei was “highly specialized”4 and “had a robust postcranium, and probably combined terrestrial bipedalism with at least occasional bouts of arboreality.”5

Nevertheless, these bones show tooth indentations from being bitten, scalloped tooth marks where bone was apparently bitten through, and fractures typical of those inflicted after losing an argument with a large carnivore. Perhaps the owner of the bones should have stayed in the trees more.

Neither Nutcracker Nor Man

Nothing about these new bones demonstrates their owner was bipedal.

Whether starting with only a gorilla-like skull with big teeth or a set of thick chewed up limb bones, it is not possible from the fossil record to find an evolutionary ape-like ancestral cousin of humans. Fossils of extinct creatures, even if they have some features that distinguish them from modern counterparts—and indeed they must or they would not be extinct(!)— are not on the evolutionary ladder to becoming a different kind of more advanced creature. These animals were not transitioning to anything. In fact, this extinct non-human primate appears to have been well-designed for its life in the trees and for eating whatever vegetation in its habitat came to hand.

Furthermore, nothing about these new bones demonstrates their owner was bipedal. The claim that this animal was bipedal is based on even less evidence than similar claims about austrolopithecines—which is a good trick since the bipedality of Australopithecus afarensis and other austrolopithecines is purely conjecture anyway.

Evolutionary researchers just can’t allow that their pet human ancestral cousins—australopithecine or Paranthropus—could be anything but bipedal, so whenever a bit of bone turns up to demonstrate otherwise, the evolutionary story typically morphs to one allowing the creature a dual habitat transitioning to the terrestrial.

“Nutcracker Man” was probably no nutcracker and certainly was no man. “He” was not a side-branch shooting off of the human ancestral line. “He” was not our cousin. Perhaps Paranthropus was just a variation of the same kind of ape as the australopithecine, as some paleontologists think.But despite the fond wishes of evolutionary anthropologists who seek to explain human origins while ignoring God’s eyewitness account of our earliest history, nothing about this extinct ape’s bones and teeth can tell us anything about where we—humans—came from.

God in the beginning created two people—Adam and Eve—and from them all our human cousins have descended. Each one, no matter what Neanderthal-like name today’s anthropologists assign to their bones, is a descendant of Adam and Eve, just as much as each of us. The rest of the candidates for the human ancestral line are simply descendants of the kinds of apes God created on the same day as man, the 6th day of Creation Week, about 6,000 years ago.

Previous Article Did Ardi Head Up Human Evolution Before Lucy? Next Article Nutcracker Man’s Diet Was Rich in Brain Food After All