Did Ardi Head Up Human Evolution Before Lucy?

Ardi’s diminutive skull said to have evolved some human features a million years before Lucy.

After years as the eldest occupant of the throne of human evolutionary fame, Lucy now has a serious challenger—Ardi. Ardipithecus ramidus has long been the subject of divergent evolutionary opinions. Evolutionists believe Ardipithecus ramidus is 4.4 million years old but differ in their opinions about the nature of Ardi’s presumed bipedality. Ardi’s opposable big toe seemingly made for grasping tree branches doesn’t really fit the bipedal picture. Thus, how or if Ardi is related to humans remains a hot topic among evolutionary anthropologists.

In a new study of the base of Ardi’s skull, published in the Proceedings of the National Academy of Sciences, William Kimbel and colleagues—some of Lucy’s promoters—suggest Ardi was in the human ancestral line a million years earlier than Lucy. They write, “Reorganization of the central cranial base is among the earliest morphological markers of the Ardipithecus + Australopithecus + Homo clade.”1

Based on this partial skeleton, Ardipithecus ramidus appears to have been about 4 feet tall and probably weighed about 110 pounds. Evolutionists debate whether “Ardi” was a human ancestor or an ape with some human characteristics derived from the common ancestor presumably shared by humans and apes. Image by Science/AAAS, via Daily Mail.

“Lucy”—Australopithecus afarensis—has been around for a while now, having been discovered in Ethiopia’s Afar Depression in 1974 and finally assigned an age of 3.2 million years.2 Lucy’s place in the hall of human evolutionary fame is assured—though more by the nature of her memorable nickname drawn from the Beatles song “Lucy in the Sky With Diamonds” than by the objectivity of the science supporting her place. (Only time will tell whether “Karabo,” (aka South Africa’s Australopithecus sediba), a 2011 addition to the hominin hall of fame, will achieve similar notoriety.) But Lucy—famous as the oldest hominin3 to rise to the bipedal challenge of ascending the evolutionary tree to human-hood—has a real rival in Ardi. After all, in evolutionary paleontology, older is better.

By conventional evolutionary reckoning, Ardi predates Lucy by at least a million years. And Ardipithecus ramidus has a nickname just as catchy as Lucy’s (and Karabo’s!) even if she received her name without benefit of a Beatles song. (Ardi’s moniker is short for her genus name—Ardipithecus—which was simply drawn from the Afar word for ground or floor and the Greek word for monkey. She is thought to be female because her teeth are small.)

The trick now is to get Ardi to stand upright on her own two legs, which could be a problem given that experts say her feet and pelvis “retained considerable arboreal capabilities.”4 To that end, Kimbel and colleagues have taken a closer look at the bottom of her tiny head.

Ardi’s brain size is on par with that of female chimpanzees. Even afarensis skulls are well below the normal size for humans, with a cranial capacity of around 400 to 550 cc. (Normal humans vary greatly but are generally 700 to 2000 cc.) Ardi’s cranial capacity is even smaller, estimated at 300 to 350 cc. But no one is suggesting the Ardipithecus ramidus was evolving a bigger brain, just reshaping the base of the skull to facilitate bipedal locomotion.

Kimbel says, “Given the very tiny size of the Ardi skull, the similarity of its cranial base to a human's is astonishing.” Kimbel’s team believes that Ardi’s species—like Lucy’s—was transitioning toward human-likeness by reorganizing its cranial base for ease of upright locomotion. But Ardi, they believe, had the jump on Lucy by over a million years. 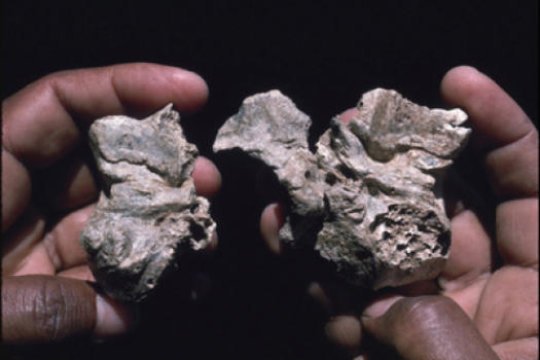 This is what’s left of the underside of Ardi’s skull. Researchers rebuilt Ardi’s very small skull from fragments and then determined that its proportionate dimensions were more like those of Lucy and of humans than of modern apes. They believe that Ardi was evolving a reorganized cranial base to make it easier to walk upright. Image by Tim White, via ScienceDaily.

Ardi’s evolutionary significance was announced in 2009 with fanfare and the claim that her mixture of advanced and primitive traits made her very much like the last common ancestor of chimpanzees and humans. Dug up in 1994 from the Afar Desert at Aramis just 46 miles from the site of Lucy’s discovery, the best Ardi fossils carry a much older date than Lucy on the basis of the interpretation of radiometric data on the volcanic rock that sandwiched them. Ardi’s canine teeth seemed unusually small for an ape and therefore have been called human-like.

The fossils from Aramis consisted of a partial Ardipithecus skeleton and an assortment of bones thought to represent 36 different individuals. Added to a few more fragments found in 1992, the new pieces of Ardi, though crushed, were viewed as a bonanza by evolutionary paleoanthropologists on the trail of humanity’s deepest roots. “All of a sudden you've got fingers and toes and arms and legs and heads and teeth,” said Tim White, a member of the team that helped propel Lucy to fame. “That allows you to do something you can't do with isolated specimens. It allows you to do biology.”5

After 15 years of “doing biology,” White’s team published their analysis of Ardi’s “weird way of moving.”6 They believe Ardi was bipedal when on the ground but remained well-equipped for moving through trees. Ardi’s opposable big toe was just right for grasping tree branches, and though they thought the upper part of the pelvis was broad enough to keep Ardi from lurching awkwardly from side to side during bipedal attempts, the lower pelvis was constructed like any other arboreal ape’s.

Not all evolutionists agree that Ardipithecus ramidus was bipedal. For instance, Stony Brook University’s William Jungers said, “This is a fascinating skeleton, but based on what they present, the evidence for bipedality is limited at best. Divergent big toes are associated with grasping, and this has one of the most divergent big toes you can imagine. Why would an animal fully adapted to support its weight on its forelimbs in the trees elect to walk bipedally on the ground?”7

Liberty University biology professor and podiatrist Dr. Mark Blais, a biblical creationist, examining the claims about the supposed bipedal features of Ardi’s foot, concluded, “The few intact foot bones are not adequate to make any determination as to the type of gait Ardi displayed. The researchers have based their conclusions on incomplete data and given a biomechanical analysis that is more bias than fact and should not be considered credible.”8

The foramen magnum—the large opening allowing the spinal cord to connect to the brain—is positioned differently on human and ape skulls. It is farther forward on the human skull, supporting the human head in the optimal position for looking forward during bipedal walking. Kimbel and team-member Yoel Rak have studied the configuration of the base of the afarensis skull and now completed a similar analysis of Ardi’s.

Based on reconstruction of an extremely fragmentary afarensis skull, Kimbel and Rak reported that the foramen magnum had migrated forward (in the evolutionary sense) from the ape position, giving afarensis a more-human support for its head. As we showed in “Lucy, the Knuckle-Walking “Abomination”?” there was more imagination than fossil available in the data set. Most of the relevant portions of the skull were missing. Nevertheless, Kimbel and Rak concluded that afarensis was more like a human than an ape and that it therefore represented an evolutionary ancestor of humans.

Kimbel, Rak, and colleagues now report a similar analysis of Ardipithecus ramidus. After painstakingly dissecting the crushed bone bits from a rocky matrix, the team scanned them with a CT scanner and digitally rebuilt a skull for Ardi. After measuring what dimensions could be measured and estimating the rest on the basis of proportions found in humans and apes, the team concluded that “Ar. ramidus shares with Australopithecus each of these human-like modifications.”9 They feel that evolutionary modifications of the cranial base over 4 million years ago led the way for the rest of human evolution. They note that debate continues regarding whether the evolving brain pushed the skull to reshape itself or whether the fitness of the skull for bipedal locomotion encouraged the brain to evolve.10

Ancestor, Cousin, or Neither

Neither the similarity of the cranial base in two extinct apes—afarensis and Ardi—nor even the fact that this anatomy may11 differ from that of modern apes demonstrates that Ardi is our ancestor. Evolutionary change from one kind of creature into another is an imaginary connecting of the dots. Ardipithecus ramidus and Australopithecus afarensis do differ in some anatomical respects from living apes. The same can be said of many creatures when extinct and living are compared. Nothing intrinsic to those differences, however, proves evolutionary progression to higher taxonomic kinds.

Evolutionary researchers debate which position Ardi should occupy in our history—ancestor or cousin—without considering the fact that actual observations in biology do not show that any kind of animal has ever or could ever evolve into a different or more complex kind of animal. White noted the excitement of being able to “do biology,” but “doing biology” does not support the evolutionary contentions that apes and chimps ever shared an ancestor. Actual biological observations—like the fact that animals reproduce and vary only within their kinds—support instead the biblical account of creation history found in Genesis.

From the Bible’s God-given eyewitness account we know that about 6,000 years ago God created all kinds of land animals on the 6th day of the earth’s existence, and on the same day He specially created Adam and Eve in His own image. Man did not evolve from any ape-like ancestor. Biblical history sheds light on Ardi’s true identity as an ordinary descendant of an animal created on day 6. Like Lucy, Ardi is simply an extinct species of ape.

We need to beware of ape-based theology that suggests man is a mere animal, for humans are accountable to God and need God’s love and grace in ways animals never can. Jesus Christ the Son of God came to earth as a man to die for the sins of all people (Hebrews 2:9–10). He thus made a way for us to be forgiven (John 3:16; Romans 6:23) for our sinful rebellion against Him and to have fellowship with our Creator now and eternally in heaven.

Previous Article Our Impressive Immune System: More Than a Defense Next Article Building Nutcracker Man from the Ground Up