Blood will tell,1 but not always the expected story.

La Sima de los Huesos—the “Pit of Bones” in an Atapuerca cavern near Burgos in northern Spain—was the final resting place for 28 of Europe’s earliest human inhabitants dubbed Homo heidelbergensis. Because they resemble Neanderthals, researchers expected their DNA to confirm a relationship to them. New genomic data, however, rather than clearing up the heritage of the people of Sima de los Huesos, has muddied the evolutionary waters further by demonstrating that they were instead related to Denisovans. Denisovan fossils were found in Siberia, and DNA suggests they had a presence from Siberia to southeast Asia, far away from northern Spain.

People From The Pit Of Bones 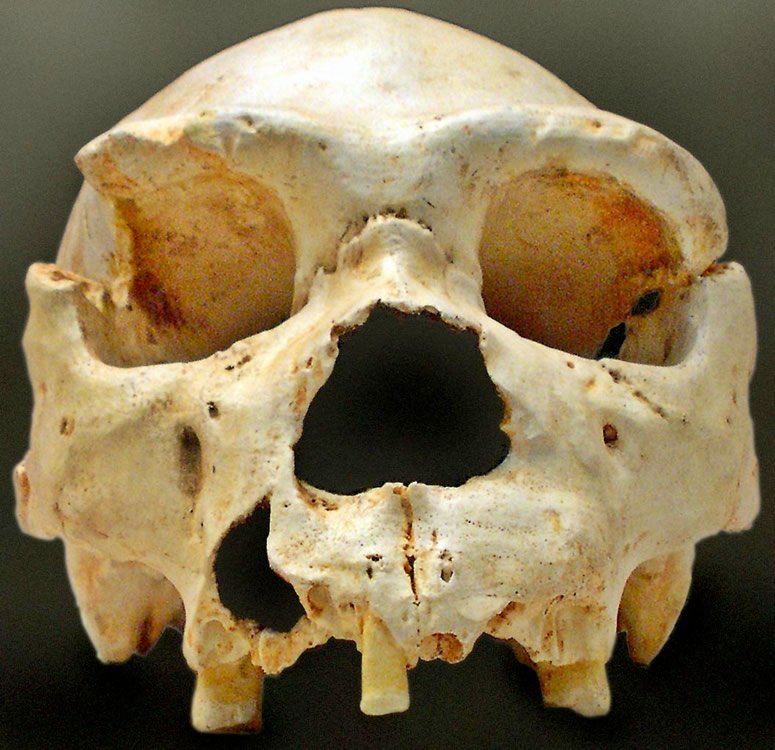 This skull from northern Spain’s La Sima de los Huesos is identified as Homo heidelbergensis. These people resemble Neanderthals, but genetic analysis shows they are instead related to the Denisovan people, whose scant remains have been found in faraway Siberia. Homo heidelbergensis has held a disputed place in the evolutionary version of human history. Biblical history, however, explains the close relationship of such extinct varieties of people and modern humans. All descended from Noah’s family, whose descendants dispersed across the world from the Tower of Babel. Image by José-Manuel Benito Álvarez, via Wikipedia Commons.

Homo heidelbergensis skulls have less prominent features than Neanderthals. Their place on the evolutionary tree is debated.2 Both who the inhabitants of Sima de los Huesos were and when they lived has been a matter of dispute among evolutionists. While the latest news on their lineage may help identify their closest relatives, the dates assigned to them remained mired in evolutionary assumptions.

Ancient DNA tends to be degraded into single-stranded fragments. Improvements in technology enabled scientists from the Max Planck Institute for Human Anthropology last year to sequence such DNA and learn more about the elusive Denisovans.3 That DNA evidence confirmed that Denisovans, Neanderthals, and modern humans are all related.

Applying this new technology to DNA from a Sima de los Huesos thigh bone has yielded the sequence of its mitochondrial DNA. Mitochondria are found in all cells, but the DNA that blueprints their formation—unlike the rest of the DNA in cells—is only passed on through mothers. Mitochondrial DNA can thus provide a partial picture of a person’s ancestry.

Matthias Meyer, whose team developed the improved technology, says, “This is the hardest sample I have ever worked on that yielded a result.”4 Those results, published in Nature, show that the person from the cave was not a match for Neanderthals but was a pretty good match for the Denisovan people whose scanty fossil evidence has come from Siberia’s Altai Mountains. Denisovan fossils at this time consist only of a finger, a toe, and a few teeth, so we do not know what they looked like.

“We have taken a first glimpse now and what we find is unexpected and confusing,” Meyer said. “But I'm confident we'll get more data, and then it's very likely we'll be able to nail down some hard facts, about whether these Sima de la Huesos guys are the ancestors of Neanderthals, the ancestors of both Neanderthals and Denisovans, or even something completely different.”5 Chris Stringer of London’s Natural History Museum said, “Either way, this new finding can help us start to disentangle the relationships of the various human groups known from the last 600,000 years. If more mitochondrial DNA can be recovered from the Sima population of fossils, it may demonstrate how these individuals were related to each other, and how varied their population was.”6

“This unexpected result points to a complex pattern of evolution in the origin of Neanderthals and modern humans,” says Juan-Luis Arsuaga, who originally found the Sima de los Huesos bones. “I hope that more research will help clarify the genetic relationships of the hominins from Sima de los Huesos to Neandertals and Denisovans.” 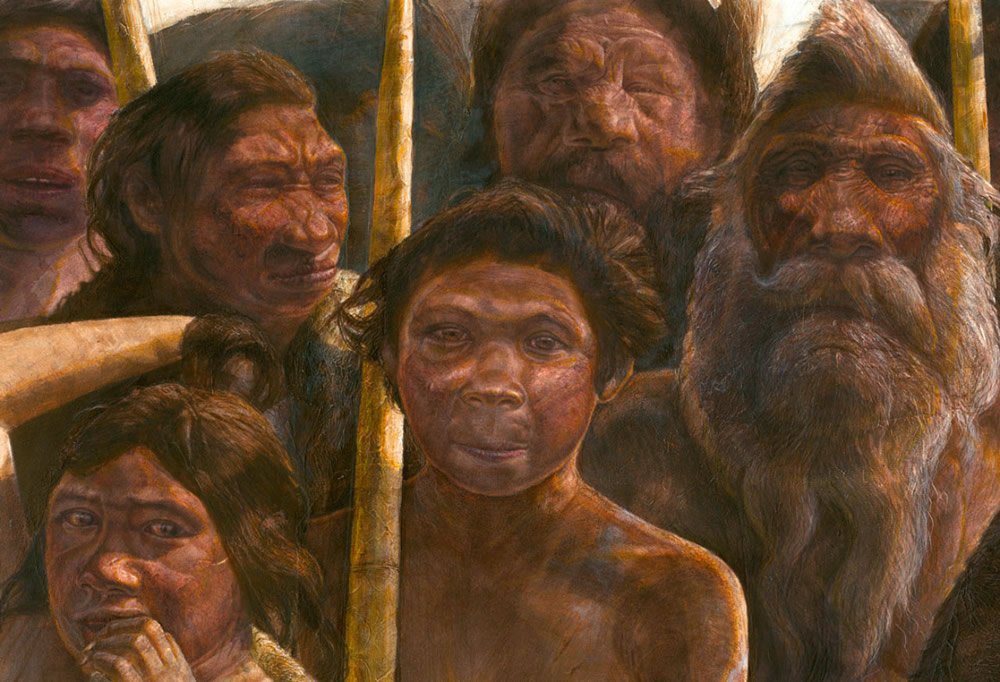 This is an artist’s impression of the people whose bones were found in La Sima de los Huesos, a pit in northern Spain’s Atapuerca Mountains. Their faces, like those of other Ice Age fossils classified as Homo heidelbergensis, are drawn to reflect their somewhat softened Neanderthal features. Genomic analysis reveals they are closely related to the Denisovan people whose fossil fragments have been found in Siberia’s Altai Mountains. These relationships are not surprising in light of biblical history which indicates all these groups were descended from Noah’s family and would have descended from those dispersed from the Tower of Babel in the years after the global Flood. Image © Kennis and Kennis/Madrid Scientific Films, via Sci-News.

Evolutionary anthropologists assume that humans gradually evolved from ape-like ancestors and through a series of progressively less primitive human forms. They assume that hundreds of thousands of years elapsed between the evolutionary advent of various Homo species. However, the more geneticists learn about ancient people like Neanderthals, Denisovans, and now the people of Sima de los Huesos, the interrelationships of these fully human people with each other and with modern humans become increasingly apparent.

Once again we see variation within the human genome existing in a group of humans—those found at Sima de los Huesos—that appear to be closely related to the Denisovans. These humans like the Denisovans and Neanderthals are descendants of Noah's family that migrated out from the Tower of Babel and likely became isolated from other human populations.

The mitochondrial DNA of all these groups are similar to modern humans with small differences likely due to their isolation and lack of intermarriage with humans outside of their group.

Of course the Denisovan fossil remains and those of Sima de los Huesos are geographically very far apart. There are several possibilities to explain their relationship such as the humans at Sima de los Huesos being a group from which the Denisovans formed at a later time after migrating further East. Based on genetic data alone, it will likely not be possible to determine exactly how the two groups though far apart geographically are closely related.

These humans like the Denisovans and Neanderthals are descendants of Noah's family that migrated out from the Tower of Babel and likely became isolated.

While evolutionary anthropologists try to fit these genetic discoveries into their preconceived notions, they ignore the historical position for which there is biblical support. In fact, the genetic findings are completely consistent with history recorded in God’s Word. After the global Flood of Noah’s time, about 4,350 years ago, the human gene pool, which had begun around 1,700 years earlier with Adam and Eve, was whittled down to 8 people. Their descendants eventually dispersed from the Tower of Babel. Though they were all related, once they became isolated and in some cases reduced to small groups, distinctive traits would have emerged—characteristics that we now associate with the fossils of various “archaic” (i.e. ancient and extinct) people, who were nevertheless fully human.

In fact, the International HapMap project has found that the differences between the DNA of any two humans is remarkably small. Dr. Purdom, in a chapter titled “Were Adam and Eve Real People” in the book How We Know the Bible Is True, writes:

These studies and others have shown that the difference in DNA between any two humans is amazingly low . . . only 0.1 percent.7

Reflecting on this very low percentage, some scientists posited, “This proportion is low compared with those of many other species, from fruit flies to chimpanzees, reflecting the recent origins of our species from a small founding population” (emphases mine).8 They also stated, “[Certain genetic estimates] tell us that humans vary only slightly at the DNA level and that only a small proportion of this variation separates continental populations.”9

These findings are consistent with the Bible’s history that humans were created several thousands years ago; in other words, a short amount of time has passed, so there is little genetic variation. It also gives us support regarding the dispersion of the human population at Babel into groups that migrated and were largely isolated from other groups. Specific genetic differences became prominent in these groups on separate continents and remains in these populations today.

Scientific discoveries in ancient human genetics are consistent with the view that a group of related people dispersed into geographically distinct groups. We find genetic evidence that people were related because they all descended from the 8 people that disembarked from Noah’s ark after the global Flood, about 4,350 years ago. Denisovans and Neanderthals and the people of Sima de los Huesos (whether they are called Homo heidelbergensis or something else) were simply humans who lived in the post-Flood world and left their fossilized remains in Ice Age sediment.

Previous Article Can Lake on Mars Support Life? Next Article Did We All Come from Adam and Eve?