Fossil Hand Turns Back the Clock on Tools for Human Evolution

Hand fit for a human found surprisingly deep in the fossil record.

The discovery of a hand bone in Kenyan rock has evolutionary anthropologists pushing back the timeline for evolution of the human hand. Finding this unmistakably human bone unexpectedly deep in the fossil record has prompted them to suppose that ape-like hand bones rearranged themselves to human form half a million years earlier than previously thought. They assert that a hand “preadapted” for precision and manual dexterity may have helped humans produce complex tools and pull themselves up the evolutionary ladder.

The bone, found in East African Lower Pleistocene rock conventionally dated at 1.42 million years, is a third metacarpal. The third metacarpal is the long bone underlying the palm and connecting the middle finger to the wrist bones. A little bony projection on the wrist-end of this metacarpal—the styloid process—is unique to humans and essential for the manual precision that is a human trademark.

Why is the styloid process so important? Without the styloid process to lock the metacarpal into the wrist bones, the entire wrist—a complex of hand, thumb, forearm, and wrist bones formed to fit together perfectly—lacks the stability needed to manipulate objects with both strength and precision. The styloid process distributes the stresses created as the thumb pinches and squeezes from a myriad of positions so as to minimize shearing and tearing. The dexterity made possible by unique features like the styloid process facilitates the human ability to make tools, whether flaked stone axes or optical equipment.

“There’s a little projection of bone in the third metacarpal known as a ‘styloid process’ that we need for tools,” explains paleoanthropologist Carol Ward, lead author of the study published in the Proceedings of the National Academy of Sciences. “This tiny bit of bone in the palm of the hand helps the metacarpal lock into the wrist, helping the thumb and fingers apply greater amounts of pressure to the wrist and palm. It’s part of a whole complex of features that allows us the dexterity and strength to make and use complex tools.”

The styloid process has been found on all true human fossils for which the metacarpals have been found—including Neanderthals and Homo heidelbergensis. Conversely, the styloid process is clearly missing on both modern apes and the various supposed ape-like human ancestors in the human evolutionary lineage. For instance, the australopithecine fossil record (Au. afarensis, Au. africanus, and Au. sediba) has produced no styloid processes. Ape wrists are well-designed for the lifestyle of an ape but not for human pursuits. 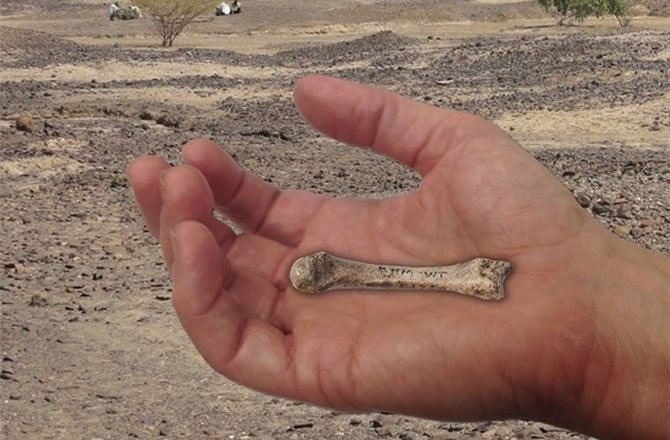 This fossilized third metacarpal bone found in Kenya is resting in its natural position in the palm. Despite its alleged age of 1.42 million years, its shape and size is unchanged in humans today. The third metacarpal connects the middle finger to the wrist. The third metacarpal of humans—and only humans—has a styloid process. The styloid process—visible here as a pointy protrusion on the wrist-end of the bone—allows the metacarpal to lock itself into the wrist bones, stabilizing the wrist and hand during all the powerful and precise movements of the thumb. Image: University of Missouri through Discovery.com

The researchers who analyzed this metacarpal write, “In all ways, this bone resembles that of a modern human in overall proportions and morphology.”1 Ward says, “We had thought the modern human hand was something relatively recent, maybe something that appeared as a recent addition near the origin of our species. This suggests this feature might be fundamental to the origin of the genus Homo.” The modern anatomy, Ward says, “suggests this feature may have a pre-adaptation that helped set the stage for all the technology that came later.”

Because the metacarpal reveals its uniquely human quality quite deep in the fossil record, its discoverers have tentatively assigned it to Homo erectus. In fact, some fairly complex Acheulian tools last year were re-dated to 1.75 million years and assigned to Homo erectus as their only reasonably available craftsman, so this metacarpal equips Homo erectus to do what he is already credited with accomplishing.

Furthermore, because this bony process clearly demarcates Homo from non-homo, the researchers suspect the more ape-like members of the human evolutionary line—the australopithecines—lacking this adaptation, may have gone extinct because they failed to evolve it.2

“At this time, in addition to early members of Homo, there were some late-surviving members of Australopithecus still around—close relatives of humans that don’t seem to have this adaptation,” Ward says. “This raises the question of how important our hands were in the success of our lineage and the extinction of their lineage (Australopithecus).”

Australopithecines do have proportionately shorter fingers than many living apes, but they lack the sturdy thumb of humans. These are but two of the important features that make the human hand the marvelous instrument it is. (The authors actually detail eight.) 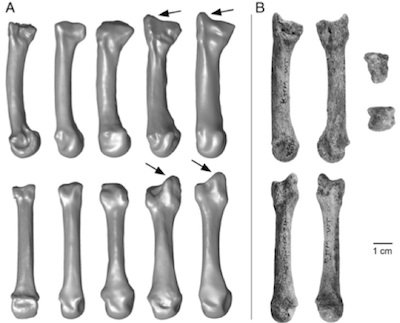 These three-dimensional images compare the third metacarpal bones from several species. From left to right are bones belonging to a chimpanzee, Australopithecus afarensis, Australopithecus sediba, a Neanderthal person, and a modern human. The arrows point to the styloid process, which is present only on the metacarpals of the Neanderthal and modern humans. On the right is the fossil known as KNM-WT 51260. Despite its supposedly great age (1.42 million years), it is morphologically indistinguishable from the metacarpals of Neanderthals and modern humans. Image by Ward et al., via PNAS.3

The bone “provides evidence that a major structural rearrangement of the hand occurred before the increased sophistication of Acheulian tools seen after 1.2 Mya,” Ward and colleagues write. No tools were found with the new bone, but now anthropologists are more comfortable identifying the toolmakers as Homo erectus.

The hands on the evolutionary clock of human manual dexterity are easily pushed back a bit by assigning a modern human hand configuration to a fossil-Homo already acknowledged as more or less human, albeit a less-evolved one. We must wonder, however, if the evolutionary clock would have been quite so accommodating if more than a little tweak to the story had been called for. Institute for Creation Research writer Brian Thomas recently pointed out that back in 2011 another group found a human foot bone dated more than 3.0 million years old. Not surprisingly, since the “oldest” hominins in the evolutionary story are significantly “younger” than this, the foot bone was assigned to Lucy, an extinct ape, and used to provide her with an arched foot. After all, the evolutionary boat can only be rocked so far.

The question of whether humans evolved because they cooked their food, learned to walk upright, or learned to manually manipulate their world is not a new one. Last fall evolutionary neurobiologists in Tokyo compared monkeys to people and decided that humans evolved their terrific manual dexterity without waiting for a balanced bipedal gait to evolve and free up their hands for more intellectual pursuits. They wrote:

People have long speculated whether the evolution of bipedalism in early hominins triggered tool use (by freeing their hands) or whether the necessity of making and using tools encouraged the shift to upright gait. Either way, it is commonly thought that one led to the other. In this study, we sought to shed new light on the origins of manual dexterity and bipedalism by mapping the neural representations in the brain of the fingers and toes of living people and monkeys. Contrary to the ‘hand-in-glove’ notion outlined above, our results suggest that adaptations underlying tool use evolved independently of those required for human bipedality.4

Thus, this metacarpal offers a hand to the tools and supports the fingers to do the walking through the brain map of manual dexterity the Tokyo research group believes humans share with macaques.

Nothing about this metacarpal is transitional.

Nothing about this metacarpal is transitional. The researchers write, “The KNM-WT 51260 [the designation for the metacarpal fossil] styloid process is unequivocally similar to that of modern humans and Neandertals and not intermediate between that of earlier hominins and later Homo.”5 Thus, the owner’s hand could have functioned as well as the hand of today’s finest surgeon. The authors write, “KNM-WT 51260 falls within the observed ranges for modern humans and Neandertals, both of which overlap considerably, suggesting minimal functional differences among them.”6

Nothing about this metacarpal supports evolution. On the contrary, this fully human modern-appearing hand bone simply showed up in the wrong place in the fossil record without as much as a by-your-leave and demanded that “early” humans be allowed to have as fine a hand as ours. Only evolutionary presuppositions that demand the rise of humanity from base and backward beginnings consign this hand to an evolutionarily primitive individual. The dates assigned to this fossil are founded on a number of unverifiable worldview-based assumptions. The Pleistocene rock in which the hand bone was found is consistent with Ice Age sediment that accumulated in the years after Noah’s Flood. This metacarpal, therefore, belonged to a person descended from Noah’s family, most likely someone descended from a family dispersed from the Tower of Babel.

The hand’s owner may well have been one of the people anthropologists call Homo erectus. But these people were as fully human as we are, and there is no reason to assume they were intellectually any less capable we are just because they had to make their way in the brave new post-Flood world. It is modern arrogance to think that we would have done any better in those circumstances. Certainly the fact that evolutionary anthropologists describe the hand bone as consistent with modern human hand bones attests to the true nature of its owner as a human being created in the image of God.