Identity and age of the world’s largest group of human fossils is in dispute. “Getting that wrong even affects how we construct our own evolution,” says evolutionary expert.

Twenty-eight of Europe’s earliest human inhabitants are buried in the famous La Sima de los Huesos “Pit of Bones” near Burgos in northern Spain. But who they were and when they lived is now a matter of great dispute among evolutionists.

On the strength of their identity as the earliest Europeans—600,000 years ago by conventional reckoning—and their identity as Homo heidelbergensis, the European Union (EU) funded construction of The Museum of Human Evolution in Burgos. The museum, which opened in 2010, is designated a United Nations Educational, Scientific and Cultural Organization (UNESCO) World Heritage Site. It is located about 10 miles from the 50-foot pit in the Atapuerca cavern where the bones were discovered. The EU donated millions of euros to the project because of the importance of La Sima de los Huesos for understanding human evolution.

Stringer believes his correction of the fossils’ age and identity fully restores the human evolutionary story to reality.

But Chris Stringer, the Research Leader in Human Origins at the Natural History Museum in London, believes both the identification of the Sima fossils as Homo heidelbergensis and their assigned date of 600,000 years are wrong. He is concerned these errors distort the human evolutionary tree. Stringer’s “Status of Homo heidelbergensis” study has just been published in the journal Evolutionary Anthropology. Stringer believes his correction of the fossils’ age and identity fully restores the human evolutionary story to reality. 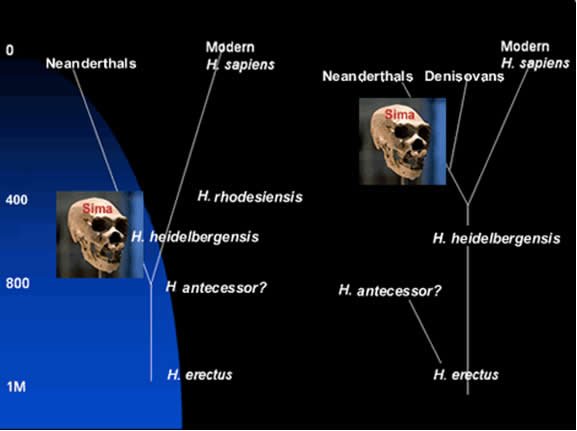 These reconstructions of the human evolutionary story depict two scenarios proposed by evolutionists. On the left, “Sima” is identified as Homo heidelbergensis and on the right as Neanderthal. Image from http://www.nhm.ac.uk/about-us/news/2012/june/largest-group-of-fossil-humans-are-neanderthals-after-all111416.html 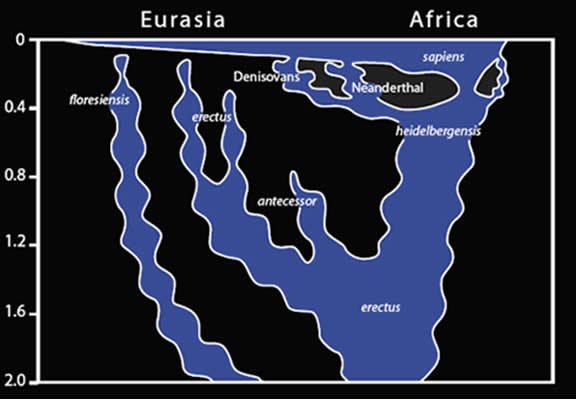 This reconstruction of the human evolutionary story depicts Homo heidelbergensis as a common ancestor of Homo sapiens and Neanderthals. But all these varieties are human beings created in the image of God and descended from Noah’s family. Image from http://www.nhm.ac.uk/about-us/news/2012/june/largest-group-of-fossil-humans-are-neanderthals-after-all111416.html

This illustration shows how some of the human fossils found in Ice Age sediments fit into the biblical timeline. Whether Neanderthal or Homo heidelbergensis, the people buried at La Sima were descendants of Noah’s family who arrived in Europe sometime after the dispersion from Babel. Homo heidelbergensis, not pictured on this diagram, are found in the Middle Pleistocene. Illustration from Answers magazine part of a feature complete with helpful diagrams explaining how “cavemen” can be explained within the biblical timeline. See them all in the special feature: “Finding a Home for Cavemen: Who were they?, When did they live?, How are they different?”

Homo heidelbergensis is a variety of human whose skulls have less prominent features than Neanderthals. Their place on the evolutionary tree is debated among evolutionists, but they are thought to have evolved later than Homo erectus and to be the last common ancestor of Neanderthals and early modern humans (Homo sapiens). Those at La Sima de los Huesos, discovered in 1990, were initially dated at 350,000 years. The Atapuerca excavation led by Madrid University’s Juan Luis Arsuaga identified the fossils as Homo heidelbergensis and re-dated them to 600,000 years. The dates were derived from uranium dating of a stalagmite above the pit, which of course does not necessarily mean the stalagmite formed at the same time the people were buried, a point of concern raised by Stringer.

Homo heidelbergensis fossils have been found in Germany, Greece, England, and China. However, the Sima collection comprises ninety percent of known heidelbergensis fossils. Stringer reports fossil and genetic evidence now show the Sima fossils are just Neanderthals. "The problem is that many of the skeletons unearthed at La Sima clearly have Neanderthal features," he contends. "In particular, their teeth and jaws are shaped very like those of Neanderthals. But all other evidence indicated Neanderthals did not appear on the scene for another 200,000 years. Dating these bones to such an early date completely distorts our picture of our evolution."

Stringer, as well as Yolanda Fernández-Jalvo and Peter Andrews, of the Natural History Museums of Madrid and London respectively, says the relative lack of small bones in the pit suggests the bodies were not buried there intentionally but swept by a flood into a pit beneath the preexisting older stalagmite.

“The Atapuerca finds are hugely important,” Stringer says. “There is no other site like it in terms of numbers of bones [over 6,000] and skulls of our ancient predecessors. It is the world's biggest collection of ancient human fossils and the team there has done a magnificent job in excavating the site. However, if we cannot correctly fix the age and identity of the remains then we are in trouble. Getting that wrong even affects how we construct our own evolution.”

By reclassifying the Sima collection as Neanderthals and reassigning the dates to those conventionally accepted for Neanderthals, Stringer frees up the rather sparse collection of Homo heidelbergensis fossils elsewhere to be the ancestors of both Neanderthals and modern humans. He explains, “Removing the Sima fossils from heidelbergensis means that the species once again makes a good common ancestor for the Neanderthals, modern humans, and probably the Denisovans (known from DNA recovered from fragmentary fossils in Siberia) too. These new views on the dating and classification of the Sima material have led to a constructive scientific debate with the Atapuerca team, which will help to progress our understanding of the place of these important fossils in human evolution.”

Yet the worldview-based decision about the correct age of these and other fossils determines “how we construct our own evolution.”

Perhaps the Museum of Human Evolution in Burgos will need to change its signage. If we were going to design its new ones, we would start by pointing out that when it comes to origins science, your starting assumption—that God’s Word is trustworthy or not—determines your conclusions. Stringer says we must “correctly fix the age” of the fossils, and the age “affects how we construct our own evolution.” But without eyewitness corroboration of the burial, how can we know the age we have “fixed” is correct? Yet the worldview-based decision about the correct age of these and other fossils determines “how we construct our own evolution.” Stringer’s statement is an implicit affirmation of the fact that the evolutionary “story” you are willing to accept—or to reject—depends on your worldview-affected assessment of the “correct age.”

Human fossils of people who dispersed from Babel are found in various layers of Pleistocene rocks (conventionally dated at 2.6 million to 10,000 years ago), which were laid down during the Ice Age. (The Ice Age occurred after the global Flood of about 2350 BC and was triggered by it.) Variations exist between these skeletons, with Homo erectus being found in the deepest of Pleistocene layers fairly close to Babel. Homo heidelbergensis fossils are found in layers dated by evolutionists to around 600,000 years. Neanderthals appear above that level, and only early modern humans are preserved in the layers above these. Biblically we understand that a variety of people dispersed from Babel, and these human fossils track their scattering around the globe. The oldest and deepest of these human fossils—Homo erectus—were just as human as we are. And so were those whose fossilized remains were found in La Sima cave.

Previous Article What is Man? Next Article Sweet Tooth