Are empathetic bonobos our evolutionary soul-mates?

Do you work and play well with others? Keep your tantrums to a minimum? Are you basically a nice person? Emotionally balanced and stable? Sensitive, out-going, and supportive of your fellow man? If so, evolutionary primatologists Frans B. M. de Waal and Zanna Clay suggest your empathetic nature and even temperament are rooted in humanity’s evolutionary past. (If you lack those mature character qualities . . . well, let’s not be too insulting, but perhaps the logical implication would be that you are some sort of evolutionary throwback.)

Bonobos are widely regarded as the most empathetic of the great apes. And like chimpanzees, evolutionists consider them among humanity’s “closest relatives.”1 De Waal says, “This makes the species an ideal candidate for psychological comparisons. Any fundamental similarity between humans and bonobos probably traces back to their last common ancestor, which lived around six million years ago.”

“Development of socio-emotional competence in bonobos,” published in Proceedings of the National Academy of Sciences, is based on comparison of bonobo orphans raised by humans to bonobos raised by their own mothers. Observers correlated bonobo spats, tantrums, and quickness to comfort others with their age and upbringing. The animals live at the Lola ya Bonobo Sanctuary in the Democratic Republic of the Congo. Most bonobos in the sanctuary are wild-caught orphans who were subsequently raised and rehabilitated for years by humans and ultimately released into an enclosed forest for bonobos.

De Waal and Clay found that human-raised bonobo orphans did not control their emotions as well as bonobo-reared juveniles. “Compared to peers reared by their own mothers, the orphans have difficulty managing emotional arousal,” says Clay. They were also slow to recover once they got upset. “They would be very upset, screaming for minutes after a fight compared to mother-reared juveniles, who would snap out of it in seconds.”

These same orphans were slow to console their distressed peers, such as bonobos screaming after being attacked. Mother-reared juveniles were quick to console and caress their friends in need. “It's almost as if one first needs to have one's own emotional house in order before one is ready to visit the emotional house of another,” de Waal says. “This is true for children, and apparently also for bonobos.”2 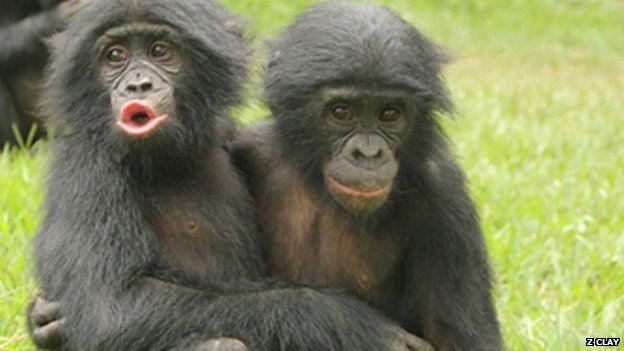 Bonobos raised by humans make less effort to console their peers than bonobos raised by their own mothers. They also have more tantrums. Evolutionary primatologists believe their apparent similarity to the emotional difficulties of institutionalized human orphans supports a naturalistic evolutionary origin for morality. Image by Zanna Clay through BBC.

Besides seeing a correlation between personal emotional control and the ability to empathize with others, Clay and de Waal note that human-reared bonobos play less, display more anxiety after a fight, and have fewer friends than their mother-reared counterparts. They believe the bonobo orphans’ behavior is comparable to the poor emotional control and difficulty in forming social attachments more commonly seen in institutionalized human orphans than in children with stable parental bonds.3

“Animal emotions have long been scientifically taboo,” explains de Waal, but he—a professor in Emory University’s Department of Psychology—thinks the study of animal emotions is a reliable way to explain human emotional needs and responses because he believes apes and humans are evolutionary cousins. “By measuring the expression of distress and arousal in great apes, and how they cope, we were able to confirm that efficient emotion regulation is an essential part of empathy,” he says. “Empathy allows great apes and humans to absorb the distress of others without getting overly distressed themselves.”

Interestingly, the researchers found that adolescent and adult bonobos don’t console their unhappy peers as much as juveniles do. This discovery does not fit the pattern seen in humans, they write, and is “seemingly at odds with the human literature.”4 To explain this discrepancy, they suggest that human adults are better able than bonobos to evaluate situations and choose appropriate responses. They add, “It is hard to make meaningful interspecies comparisons in this regard, however, because the methodology typically used for adult human studies (i.e., questionnaires) differs markedly from the observational measures applied to children and used here.”5

“Living Links” director at the Yerkes National Primate Research Center, Frans de Waal is the author of the 2013 book The Bonobo and the Atheist: In Search of Humanism among the Primates. This study is a sample of the sort of evidence used to support the beliefs he expresses in his book. De Waal maintains that morality is a product of molecules-to-man evolutionary biology. He maintains that ethical and empathetic primate behavior “cements the case for the biological origins of human fairness”6 and believes we humans can succeed in the “struggle to find purpose in our lives”7 by reflecting on our roots in primate society—our “living links” to our evolutionary past.

But is this valid? First of all, are the investigators imposing their own thoughts and interpretations on observable bonobo behavior? For instance, consolation is defined as “spontaneous contact comfort aimed at distressed parties by means of touching, stroking, embracing, and kissing.”8 But evolutionary psychologist Richard Byrne of the University of St. Andrews, commenting on the study, points out that consolation implies we have some knowledge of the empathetic-appearing apes’ actual emotions and motives, whereas such information “is not part of the observed data.”9 The feelings and motives of animals are simply not subject to objective measurement. In other words, we as humans cannot possibly know what those “empathetic” little apes are actually feeling, thinking, and trying to accomplish. Their behavior may be nothing more than conditioned responses. De Waal and Clay’s anthropomorphized conclusions impute human feelings to these animals just as pet owners commonly do. But because they are convinced humans are just highly evolved animals, de Waal and Clay use those presumptive interpretations as scientific support for their evolutionary presuppositions and specifically for de Waal’s assertion that human morality evolved.

We as humans cannot possibly know what those “empathetic” little apes are actually feeling, thinking, and trying to accomplish.

Furthermore, comparing these apes to institutionalized children cheapens the genuine tragedy of every child who has ever suffered from “the lack of a stable caregiver.”10 When 19th century author Charles Dickens described such tragic situations in his famous novels, he called attention to their plight and promoted remedial social action. These authors appear to have a different agenda. Indeed, they pluck at the public’s emotional heartstrings when they relate the tragic state of the ape rescue-rehabs, doubtless creating a market not only for a book that advances de Waal’s atheistic humanistic notions about morality’s roots but also for the God-rejecting idea itself.

More significantly—regardless of why these apes behave the way they do—nothing about the behavior of these bonobos proves anything about the origin of human morality. The authors simply assume that humans evolved from ape-like ancestors and interpret their findings in light of their unverifiable presupposition. And where the findings cannot be made to match up with human behavior, they write off the discrepancy by saying—quite correctly, incidentally—that “it is hard to make meaningful interspecies comparisons,” a statement that should apply to their entire set of evolutionary conclusions and the anthropomorphized interpretations used to support them.

Animals were not made in the image of God. Human beings were. Animals bear no moral responsibility or sin guilt. Humans do. Ascribing human moral standards and motives to animals reinforces the false evolutionary faith that humans are merely highly evolved animals who will never have to face the holy judgment of God. And drawing conclusions about human children based on ape behavior is not valid, for human children are not animals but are made in the image of God.

We do not have to look to the world of arguably endearing but mute animals to find the origin of morality or to understand the true nature of human beings. We have a historical account provided by the Creator of all animals and humans available in the Word of God. God created Adam and Eve—the human couple ancestral to all humans—in His own image on the sixth day of Creation week, the same day He created all kinds of land animals, about 6,000 years ago. These two people, as described in Genesis chapter 3, despite being placed in a perfectly good world, rejected and rebelled against the God who created them.

From that day forward all human beings—except Jesus Christ the Son of God—have had a sinful nature (Ephesians 2:1–3) and have willfully sinned innumerable times (Romans 3:23). God as the Creator of all has the right to define what is right and wrong, moral and immoral, good and sinful. Though justice would demand the death penalty (Romans 6:23) for rebellion against our Creator, God loves all people so much that He made a way—through the coming of Jesus Christ into the world, His sacrificial death on the Cross, and His Resurrection—for people to be saved from eternal judgment and restored to a proper loving relationship with their Creator (Hebrews 2:9–10).

From our sinful nature springs the immorality rampant among mankind. Humans—unlike animals—have the capacity to understand right and wrong. God’s moral law is written on our hearts (Romans 2:14–15). We generally develop the sense to behave in socially acceptable ways, at least when it suits us. But despite the claim that people are inherently “good,” God’s assessment is that all people are sinful, wanting to go our own way (Isaiah 53:6), thus rejecting the authority of our Creator. No one can ever be morally perfect (James 2:10) and pure enough be truly “good” (Mark 10:18). We all need the gracious gift of salvation freely available through Christ (Romans 5:8–12), which will set us free from this sinful nature (Romans 6:22) and give us a new heart that wants to obey and love God (Ezekiel 36:26–28).

What we believe about God, morality, and human nature has eternal consequences. We can choose to take our theology from man’s evolutionary interpretations of ape behavior or from the Word of the Creator God. Banking on the abundant life Jesus Christ our Creator and Savior (Colossians 1:16–17) promises for now and all eternity, I choose to put my trust in the Word of God, which is trustworthy from the very first verse, rather than in the “morality” and “meaning” preached by apes. It is the desire of all of us at Answers in Genesis that all who read this will do the same.

Previous Article Did Our Ancestors Evolve Into Humans Feet First? Next Article Does the Secret of the Earth’s Origin Abide in the Planet’s Core?