Genesis: Does It Matter?

Why does AiG contend for a literal view of Genesis? Many Christians interpret the creation account differently to accommodate the “scientific” history of evolution. After all, creation doesn’t matter as much as truths like Christ’s death and Resurrection . . . does it? 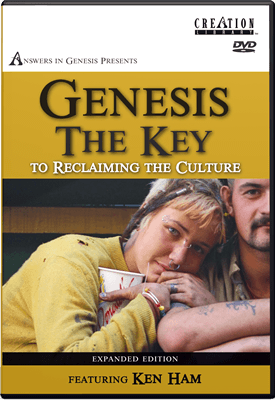 Genesis: The Key to Reclaiming the Culture
Ken explains why belief in a literal Genesis is the key to reforming the church and reclaiming our culture.

While we are not to be contentious, Christians are called to “contend earnestly for the faith which was once for all delivered to the saints” (Jude 3). God’s salvation plan rests on the foundation laid in the Genesis creation account. Genesis matters because of the following reasons:

1. Genesis shows God as Creator of all things, which bring Him glory.1

With the very first verse, the book of Genesis proclaims that the eternal God created the heavens and earth in the beginning of time (Genesis 1:1). This historical account from God cannot mesh with the opinion of evolutionists, who give glory to mindless chance for the universe and everything in it.

The alleged evolutionary process is random and requires billions of years. In contrast, God used His creative power and spoke everything into existence out of nothing in six days (Exodus 20:11; Hebrews 11:3). Since God made all things, all things belong to the sovereign Ruler and serve to glorify Him (1 Chronicles 29:11; Psalm 19:1–4; Isaiah 48:11–13; Revelation 4:11).

Sinful man is “. . . without excuse, because, although they knew God, they did not glorify Him as God, nor were thankful, but became futile in their thoughts, and their foolish hearts were darkened. Professing to be wise, they became fools, and changed the glory of the incorruptible God into an image made like corruptible man—and birds and four-footed animals and creeping things. . . . who exchanged the truth of God for the lie, and worshiped and served the creature rather than the Creator, who is blessed forever. Amen” (Romans 1:20–23, 25).

Acceptance of evolution elevates the creature over the Creator. Rejecting the Creator for the “god” of naturalism dishonors God and brings His judgment (Romans 1:24–32).

Genesis explains the origin of sin. Although created in God’s image and capable of uniquely bringing Him glory, Adam and Eve rebelled against their Creator. Eve succumbed to the serpent’s temptation, and Adam heeded the voice of his wife instead of God’s voice (Genesis 3:17). Their sin brought death and suffering into the world (Romans 5:12; 8:22).

Belief in evolution glorifies death and suffering as the means of species evolving to higher life forms. But at the end of the Creation Week, God called the finished creation “very good” (Genesis 1:31; 2:1–2). No evolutionary process of death “improved” His design. Plants and animals only vary within their created kinds. Genesis shows that death is the result of sin, not an evolutionary process.

3. Genesis shows the promised Seed who would bring God glory.

God could have justly carried out the sentence of death on Adam and Eve immediately after their sin. Yet in the first Messianic prophecy, God promised that the Seed of the woman would conquer the serpent Satan (Genesis 3:15). Later, we discover that the Lord Jesus Christ fulfilled this promise.

Jesus asked how people could believe His words if they did not believe the writings of Moses.

Jesus affirmed the trustworthiness of God’s Word from Genesis on. Jesus asked how people could believe His words if they did not believe the writings of Moses, which include Genesis (John 5:45–47).

Jesus taught that the doctrine of marriage is grounded on the creation account in Genesis. He said God created male and female “from the beginning of creation” (Mark 10:6). Evolutionists oppose Christ’s teaching by placing man millions of years after the beginning. Belief in evolution implies that one does not accept the clear teaching of Jesus and that He was either mistaken or a liar. Should we trust the speculations of evolutionists above the Lord and His perfect Word?

God’s glory—in creating all things, separating Himself from sinful man, and extending peace through the Savior—is founded on Genesis. Therefore, Genesis matters!

The same Creator God who spoke light into existence also shines the saving light of Christ into dark hearts: “For it is the God who commanded light to shine out of darkness, who has shone in our hearts to give the light of the knowledge of the glory of God in the face of Jesus Christ” (2 Corinthians 4:6).

When sinful man responds in faith and repentance to the crucified and risen Lord Jesus, this glorifies God (Ephesians 1:3–14; 2:1–10). May we glorify the God of creation and salvation by trusting the Bible and the Word that became flesh (John 1:14).