Evolution vs. Creation: The Order of Events Matters!

Many Christians think that if we just take each of the days of creation as being figurative of long ages (hundreds of millions of years or more), we can harmonize the Bible with the big bang and the geological evidence for a very old earth. But this only seems reasonable to those who pay insufficient attention to the order of events according to Genesis chapter 1 and the order of events according to evolution theory.

There are many strong biblical objections to the day-age view.

This old-earth view of the days is often called the “day-age” view and is an aspect of both progressive creationism and theistic evolution. There are many strong biblical objections to the day-age view. First, the Bible gives us abundant evidence that the days were intended by God (the divine author) and Moses (the human author) to be understood as literal 24-hour days (see Could God Really Have Created Everything in Six Days?).

Second, along with the gap theory, framework hypothesis (PDF) and other old-earth positions, the day-age view postulates millions of years of death, disease, violence and extinction in the animal world long before man was created. But this absolutely contradicts the Bible’s teaching about sin and death occurring after man was created (see Two histories of death).

Furthermore, like these other old-earth views, the day-age view is based on the false assumption that science has proven long ages through such things as (1) radiometric dating methods (see Thousands . . . Not Billions), (2) distant starlight (Light-Travel Time: A Problem for the Big Bang and Distant Starlight) and (3) how long it supposedly takes for rock layers to form (Rapid Rocks). These old-earth views developed about 200 years ago as Christians abandoned the orthodox young-earth view that dominated the first 1,800 years of church history (see Historical Setting and Millions of Years: Where Did the Idea Come From?).

Here in this article, I want to discuss another problem for the day-age view: the order of events of creation recorded in Genesis 1 contradicts (at very many points) the order of events according to the evolution story. That means that even if you don’t believe in Darwinian evolution as an explanation of the origin of living things, the only way you can harmonize Genesis with the idea of millions of years is by rearranging the order of events in Genesis.

Consider these examples of contradictions of order.

To put it pictorially, you can see the contradiction here: 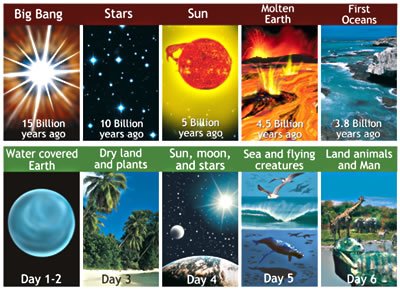 We need to be aware of one more important point of contradiction. The Bible says that the earth was completely covered with water twice in its history—the first two days of creation (before dry land first appeared) and then about 1,600 years later during Noah’s Flood.

But evolution says that there has never been a global ocean on this planet. Evolution says that the earth was originally a hot, molten lava ball which over millions of years cooled to develop a hard crust and an atmosphere. Eventually the earth developed an irregular topography (hills and valleys) and rainfall gradually filled in some of the low spots to form localized seas.

Just so there is no confusion about this, look at this series of pictures from a geology book produced by the Institute of Geological Sciences in London, England (an evolutionist institution). 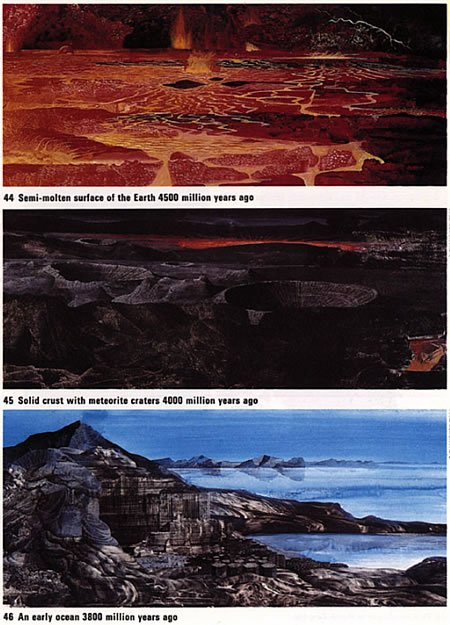 Next to these pictures on the same page the author writes:

Condensation of part of the vast cloud of cold dust and gas that gave rise to the Solar System initially formed a molten Earth surrounded by a thick and dense atmosphere of cosmic gases . . . made up largely of carbon dioxide and carbon monoxide . . . As the globe slowly cooled, crystallisation of minerals . . . began to make a crust . . . to build a new atmosphere . . . water vapour condensed and fell as rain . . . the first oceans collected in low-lying areas . . . 1

Dr. Hugh Ross, a progressive creationist, was badly uninformed when he told viewers of TV program seven of The Great Debate on the John Ankerberg Show (aired in March 2006) that in the standard big bang cosmology: “the earth begins with water over the whole surface.” Dr. Ross is simply wrong.

For all these reasons and more, you cannot harmonize the Bible with millions of years, no matter where you try to wedge in the time into Genesis—unless you rearrange the text by moving verses and phrases around to radically change the order of events in Genesis 1. But that is not the way to treat the Bible. That is not Bible interpretation—rather it is Bible mutilation, to make it say what “evolutionized” Christians want it to say.

The Bible clearly teaches a literal six-day creation a few thousand years ago and a global catastrophic Flood at the time of Noah. The Bible firmly resists any attempts to marry it with evolution and millions of years. Rather than playing fast and loose with the sacred text, we ought to heed the words of Isaiah 66:2, where God says:

For My hand made all these things, thus all these things came into being,” declares the Lord. “But to this one I will look, to him who is humble and contrite of spirit, and who trembles at My word.