Moby Dick’s ancient cousin was well-equipped with sonar for hunting and mapping the bottom of the sea.

Call him Cotylocara macei. Cotylocara means “cavity head.” Found in a drainage ditch near Charleston, South Carolina, in rock conventionally dated about 28 million years old, this whale’s skull suggests he was—like today’s toothed whales—fully equipped for echolocation. Cotylocara’s cavities and other features show he probably had all it takes to use sonar to snag his dinner and negotiate his way through the dark ocean depths. 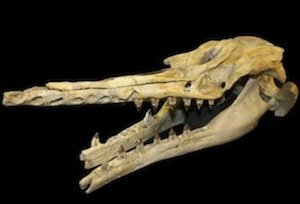 This whale skull found near Charleston, South Carolina, displays the bony features associated with modern toothed whale echolocation. If the corresponding soft tissues were also present, then this animal was all set for sonar. Image: James Carew and Mitchell Colgan, via Science Daily.1

Sonar Instead of Songs

Whales can be grouped as baleen whales and toothed whales, and both seem to use sound to communicate with each other. Baleen whales—like blue whales and humpback whales—filter plankton from the water using baleen plates and sing songs. Their anatomy does not appear to equip them for echolocation.2 Dolphins, porpoises, and toothed whales—like killer whales and Moby Dick the sperm whale—use sonar to bounce sound off objects, sensing the details of the darkest depths and the precise location of edible prey.

The Shape of Sonar

Odontocetes (toothed whales, dolphins, and porpoises) today possess several anatomical features that equip them for precision sonar. They have phonic lips, which form narrow membrane-lined passages beneath the blowhole. The membranes vibrate to generate high-frequency sound waves as air passes through.3 The air is then recycled through a vestibular sac or blown out the blowhole. The sound waves are modulated in air sinuses and pass through a lens-shaped “melon” composed of lipid layers. The characteristics and the arrangement of these lipids modifies the sound waves. Muscles in the face adjust the melon’s shape to focus the sonic waves as they leave the whale’s head.

Asymmetrical skull bones are standard equipment on echolocating odontocetes. Most have the median plane shifted to the left and also have some structural features that are larger on the right. Cetacean biologists are still working out how asymmetry contributes to echolocation.

Echolocation requires not only sound-generating structures but also receivers to capture, transmit, and interpret the sound waves that bounce back. To direct the sound waves bouncing back from rocks and prey to the auditory center, odontocetes have specialized fat deposits stashed in large canal-like cavities in their jaws.4 As with all kinds of creatures, details vary among species. For instance, the front part of the upper jaw in Cuvier’s beaked whale is quite dense and protruding, and cetacean biologists think it might act as an acoustic reflector. 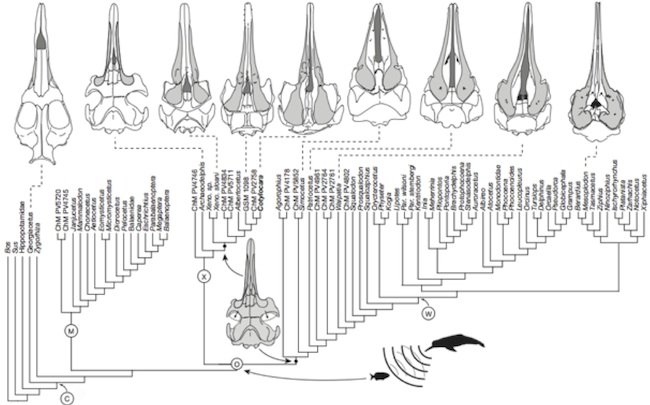 This diagram from the study in Nature shows a group of archaeocetes (left), baleen whales (above the “M” for “mystocetes”), and toothed whales (above the “O” for “odontocetes” on the right). Cotylocara is a typical toothed whale and is indicated within that group. Like other odontocetes, its skull was equipped with the features associated with echolocation. Archaeocetes, a diverse collection of terrestrial animals and serpentine sea mammals, are popularly considered the evolutionary ancestors of whales, but in reality these are not, as evolutionary textbooks assert, transitional forms. Baleen whales and toothed whales could represent separate created kinds or distinctive varieties within the whale kind, but both are clearly whales.5 Many varieties of each exist, as we would expect—based on both observable biology and biblical principles—that animals reproduce and vary within their created kinds. Image by Jonathan H. Geisler, via Nature.6

Cetaceans like dolphins and toothed whales use sonar to detect environmental details in the dark and to locate prey. Sound waves generated by forcing air through vibrating phonic lips and modulated in the air sinuses is then focused in the melon (an acoustic lens made of layered lipids), as shown by the green wave in the first three diagrams. A portion of the sound wave (red) bounces back from the fish to be transmitted through fat-filled canals in the jaw to the auditory center. Image by Malene, via Wikimedia Commons.

Many of the features that make sonar work so well in living odontocetes are soft tissues that are not typically preserved in fossils. However, the bony features common to modern odontocetes are preserved quite well in Cotylocara macei.

Cotylocara’s skull, like that of other toothed whales, is asymmetrical. The median plane is shifted to the left as in other odontocetes, though there are some larger features on the left rather than the right. The front of Cotylocara’s jaw is dense and overhanging like that of Cuvier’s beaked whale. Cotylocara has large bony cavities consistent with substantial air sinuses in front of and behind the nasal bones. This likewise is reminiscent of the air sinuses seen in living odontocetes, even revealing a preserved thin median septum in the posterior sinus corresponding to a similar bony layer in many living odontocetes.7 Though muscles are not preserved in the fossil, Cotylocara has a very wide, sturdy upper jawbone which could have provided the attachment point for the powerful muscles8 that surround the sound-producing structures in modern odontocetes.

“Taken together, the cranial features described above make a compelling case that Cotylocara could echolocate, and that has important implications for the origin of this complex behaviour,”9 the authors write in “A new fossil species supports an early origin for toothed whale echolocation,” published in Nature. “Its dense bones and air sinuses would have helped this whale focus its vocalizations into a probing beam of sound, which likely helped it find food at night or in muddy water ocean waters,” says lead author Jonathan Geisler. “The most important conclusion of our study involves the evolution of echolocation and the complex anatomy that underlies this behavior. This was occurring at the same time that whales were diversifying in terms of feeding behavior, body size, and relative brain size.” Geisler adds, “The anatomy of the skull is really unusual. I've not seen anything like this in any other whale, living or extinct.”

Variations on a Theme

Having all the bony requirements for echolocation in place, Cotylocara, suggest the authors, had evolved a rudimentary form of echolocation and that the muscles to make the system work well evolved soon after,10 given that the bony attachments and cavities are all in place. However, since muscles are not typically preserved in fossils, they are only assuming that the muscles needed to trick out the echolocation equipment were not present in Cotylocara.

The authors conclude that this whale lived soon after baleen and toothed whales diverged from each other. They propose that the needed muscles soon evolved and that afterward convergent evolution produced many variations in skull shape as seen in both extinct and living odontocetes. The strongest claim the authors make for this animal representing an intermediate (transitional) form rests on its comparison to archaeocetes.

Since muscles are not typically preserved in fossils, they are only assuming that the muscles needed for echolocation were not present in Cotylocara.

Archaeocetes are believed by evolutionists to be the evolutionary ancestors of baleen and toothed whales, and it is in this group they claim that terrestrial tetrapods transitioned to the great sea mammals. Archaeocetes comprise a diverse group that includes some animals (like Basilosaurus) that appear to have been non-cetacean sea mammals with tiny so-called hind “limbs” consistent with reproductive claspers, animals (like Pakicetus) that were clearly terrestrial animals, and other animals for which the necessary fossils to evaluate locomotion are distinctly lacking. There is no evidence for a transition from land life to aquatic life, nor any reason to consider archaeocetes to be the evolutionary forebears of whales.

Several animals classified as archaeocetes exhibit some degree of cranial asymmetry. Those that have been examined so far have their midlines twisted or shifted a little to the right, in the opposite direction of the odontocetes, though it is not marked and some have suggested the asymmetry may even be an artifact of being deformed during burial.11 The authors suggest that Cotylocara was transitioning from a pre-echolocating evolutionary ancestor, in process of completely reversing the direction in which the bones in its skull are twisted. This presumption is based on the belief that terrestrial animals evolved into whales. The existence of some animals that might have had some degree of cranial asymmetry along with a number of features that do no identify them as whales does not make a case for evolutionary transitions, only for variety among animals of various kinds of aquatic and terrestrial animals.

When baleen and toothed whales do appear in the fossil record, they appear “abruptly,”12 without any believable transitional intermediates to pave the way to them. The millions-of-year dates assigned to them are based on a collection of unverifiable assumptions. As Cotylocara illustrates, echolocating whales were equipped for echolocation all along, ever since God created all kinds of animals about 6,000 years ago, designing them to reproduce and vary only within their created kinds. While Geisler notes that there are differences in this skull compared to those of other whales, it is the similarities that are most striking. With bony cavities to accommodate air sinuses and a melon, cranial asymmetry, a dense protruding section of the upper jaw as is found in some modern echolocating whales, and a broad foundation for the necessary facial muscles, Cotylocara appears to have simply been a species of odontocete that is now extinct.