Do Genetic Similarities in Bats and Dolphins Echo Evolutionary Convergence?

Surprising number of genomic “echoes” are associated with biological sonar in dolphins and bats.

Bats fly and dolphins swim, but both mammals are equipped with a sort of biological sonar. How did they get this ability? Scientists searching for the genetic underpinnings of echolocation have found that these very different animals possess at least 200 genetic similarities.

Converging on an Explanation

Using echolocation, bottlenose dolphins and some (though not all) bats scout their dark or murky surroundings with high-pitched “shouts” that bounce back full of information. That information tells these animals how to avoid obstacles and home in on their dinner. Bats and dolphins are assigned to vastly divergent branches of the evolutionary tree. Therefore, evolutionary scientists believe they independently—convergently—evolved the ability to produce, detect, and interpret ultrasonic waves.

Convergence is the evolutionary explanation invoked to explain obvious phenotypic similarities in animals of different lineages. Convergent evolution is the notion that when organisms whose ancestral paths have not recently crossed possess a similar feature (phenotype), they evolved that feature independently to cope with similar challenges.

The series of fortuitous genetic mutations typically credited with producing convergently evolved traits is generally thought to be different. Complex phenotypic traits require input from many different genes. Presumably, the random road of genetic evolution would not tend to travel the same way twice, particularly to produce complex traits in animals of different lineages. More likely, evolutionists have assumed, evolution found its way through different genetic means to achieve the same ends.

Until recently therefore, evolutionary scientists assumed that bats and dolphins randomly evolved their facility for echolocation through different genetic processes. However, having compared their genomes with those of other mammals, researchers found that the genetic basis of echolocation in these very different mammals is quite similar. They therefore conclude that the ancestors of bats and dolphins evolved echolocation through the same molecular mechanisms. 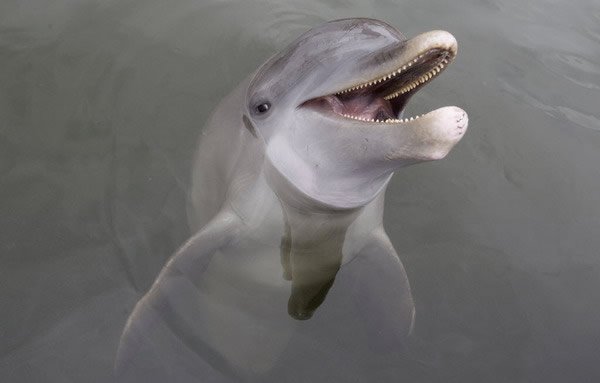 Image by Wilfredo Lee/AP, via The Christian Science Monitor.1 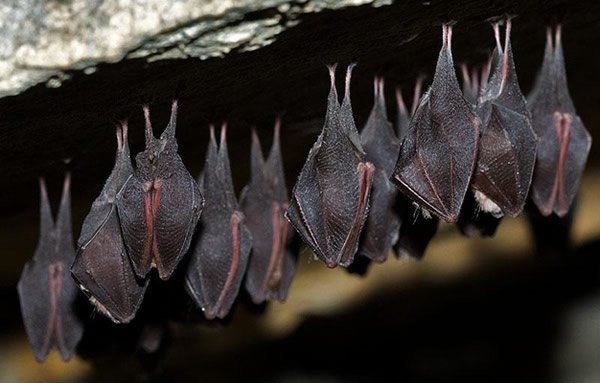 How did bottlenose dolphins and these greater horseshoe bats both acquire the ability to use biological sonar to navigate in the dark? Geneticists have learned that these echolocating animals share about 200 genetic similarities that differ from non-echolocaters. Evolutionists propose that in each of their separate evolutionary lineages their ancestors accrued around 200 similar mutations for echolocation.

Just as submarine sonar systems consist of multiple complex components, so mammalian echolocation is the result of a number of genetically encoded proteins working together correctly. Evolutionary biologist Stephen Rossiter’s team of researchers reported in 2010 that the protein prestin was associated with hearing sensitivity in both dolphins and bats. But one protein alone doesn’t produce the ability to echolocate, so they set out in this study to search for groups of genes that might be involved.

Rossiter’s team compared the genomes of 22 mammals including six species of bats—some that do and some that do not echolocate—as well as the dolphin, dog, horse, cow, mouse, and human. They were surprised to find that 200 genetic similarities correlated with the ability to echolocate.

“A few dozen would probably have surprised us,” says lead author Joe Parker. “These results give us an idea that in some circumstances, the solutions natural selection happens upon can be similar in unrelated animals right down to the molecular level.”

Just how those 200 genes relate to echolocation, however, is as yet unclear. Only 17 of the genetic similarities are present in genes known to be associated with hearing—specifically with the development of the spiral-shaped cochlea and vibration-sensing hair cells in the inner ear.3 (These structures are involved in the transfer of data about sound vibration to the brain.) Some of the similarities occur in parts of the genome associated with vision, leading the researchers to suspect that evolution of echolocation involved a shift in the primary sense upon which the evolving animal depended. However, most of the genetic similarities involve genes with no know association with either hearing or vision.4

The researchers presume that many of the proteins encoded by these common genes will be found later to have sensory functions. They conclude that natural selection, acting on animals facing similar environmental challenges—like difficulty seeing in their dark or murky environment—must be “powerful enough to also drive recurrent evolution at the sequence level.”5

Created by or for their Environment?

“Both have to catch prey and avoid obstacles in environments where vision isn't particularly useful. Hence there's a common pressure to develop another sense there,” says Parker. “It was previously assumed that since they are unrelated, their genomes and physiologies were different, and so the same problem would be solved by different means in each animals [sic].”

The researchers propose that evolution produced this combination of mutations in several mammals sometime after bat ancestors and dolphin ancestors diverged from their common ancestor 60 million years ago. That would allow about 40 million years for the evolution of this valuable ability among the members of the bat and dolphin lineages before the evolutionary emergence of bats and dolphins about 20 million years ago, by evolutionary reckoning. Echolocating bats are “not a true group—one lineage also contains the non-echolocating Old World fruit bats,” 6 so they maintain echolocation had to evolved twice in bats as well as once in dolphins. The researchers conclude the pathway to mammalian echolocation followed the same genetic pathway by accruing 200 similar mutations three different times.7

Coping with the Copious Echolocation Code

Common designs do not imply that either common evolutionary ancestry or convergent evolutionary development must have been involved.

While the researchers have thus far only indirectly shown a duplicated genetic pattern of convergent evolution—since they don’t actually know the roles of most of the genes involved—their discovery has much wider implications for evolutionary biology. Geneticist Todd Castoe of University of Texas, Austin, says, “I’m pretty convinced they are finding something real, and it’s really exciting [and] pretty important.” However, he adds that the discovery is “bittersweet.” Why? Because evolutionary biologists tracing evolutionary family trees may be misled by large blocks of convergently evolved genetic similarities into mistakenly thinking the divergent animals are actually related through a recent common ancestor. Castoe says, “We currently have no way to deal with this.”8

Rossiter’s team writes that this dramatic “mode of molecular evolutionary change is relatively underappreciated, and is under-exploited in seeking to understand the genetic basis of complex traits such as echolocation.”9 Evolutionists like Castoe are right to be concerned about accuracy in their decision between convergent evolution and ancestral lineage. Do lots of common genes really imply recent common ancestry, as evolutionists have generally assumed, or could they be the result of convergent evolution?

Evolutionary scientists ignore, however, a third alternative: a common Designer. Common designs do not imply that either common evolutionary ancestry or convergent evolutionary development must have been involved. Common designs—whether in grossly visible phenotype or at the level of the genome—are exactly what we would expect from a common Designer. And that common Designer is the Creator God of the Bible. He created all kinds of animals to reproduce and vary within their created kinds. He did so, by His own account recorded in the Bible, about 6,000 years ago. His description of Creation Week (Genesis 1 and 2) leaves no room for evolution, and according to Exodus 20:11 He completed the work of creation in just six days.

As always the evolutionists give credit to natural selection and mutations, which just “happen” to come up with the same solution in both organisms. This is completely ludicrous when you consider the sheer number of genes involved. Just as common designs are used in engines to power motorcycles, cars, and airplanes, God used a common design to allow bats and dolphins to echolocate.

This research has made an elegant beginning at revealing not evolutionary history but the intricate design evident in creation, even at the genetic level. We therefore look forward to further investigations regarding the functions of the many similar genes that appear to be “fellow travelers” with the ability to echolocate.