“God created great sea creatures” (Genesis 1:21). And the greatest of them all, surely, is the mysterious blue whale. Scientists are still trying to understand how such a massive air-breathing mammal—with a stomach the size of a minivan—is so well designed for life in the deep.

Alone in the ocean depths swims the largest creature that has ever lived on land or sea. Weighing as much as thirty full-grown elephants and with a mouth big enough to swallow a bus, he devours literally tons of food every day. But unless you’re shrimp-sized, you aren’t on the menu, because this monster of the deep—the blue whale—has no teeth.

The largest blue whale (Balaenoptera musculus) that scientists have measured was 98 feet (30 m) long, though in 1909 a whaling station reported the capture of a big blue measuring over 110 feet (34 m). A single blue whale can weigh more than 150 tons (136 m. tons). Even the long-necked dinosaurs, although some of them were longer from nose to tail, probably never came close to the weight of big blue.

My, What a Big Mouth You Have

A big body needs a big mouth to feed it. When big blue opens its jaw to take a huge gulp of ocean water, thick accordion-like folds of skin expand like a massive water balloon, big enough to hold 15,000 gallons (57 kl). But it doesn’t swallow the water. 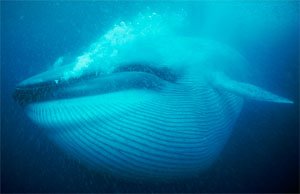 It immediately forces most of the water out by shutting its mouth and squeezing the water through plates around its mouth. Tons of small shrimp-like animals called krill get stuck in the plates, and then the whale swallows the krill. Imagine filling your entire kitchen with shrimp and swallowing them all with one gulp!

Big blues belong to the group of whales called baleen whales. Instead of teeth, they have plastic-like plates called baleen, which are stacked very close together in their mouths and oriented so that water can be squeezed out between them. The baleen is made from keratin protein (the same material in your fingernails), making it both strong and flexible so that the whale can easily close its mouth.

Because big blues cannot bite their prey, they must lunge with open mouths to capture as much krill as possible. Recent research shows that the big blues dive deep and come up under huge schools of krill. The tremendous muscle strength required to hold open the whale’s massive mouth and shut it while lunging forward is considered “the largest mechanical action in the animal kingdom.”1

Big blues are mysterious animals. They have been difficult to study because they were almost hunted to extinction in the last century, and they do not migrate in groups like other whales. Researchers are discovering that big blues swim over vast areas of the ocean and separately travel in many different directions from each other. Just recently though, scientists have noted male and female whales swimming together in pairs. It may be that big blues find long-term partners and just appear to live separately because they spend so much time apart. 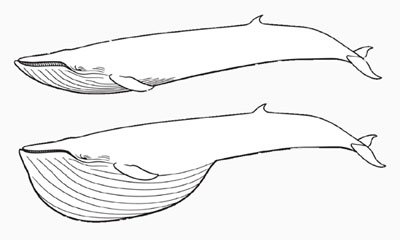 Blue whales have a special design for sucking nearly 15,000 gallons (57 kl) of water into their mouths. The skin has accordion-like folds that can expand like a balloon. Then they force the water out through their “teeth” (actually, plates), leaving behind a snack of shrimp-like krill.

Big blues can actually communicate with one another over hundreds of miles by creating large low-frequency sound waves, called infrasound, too low for human ears to detect. So even though it appears that big blues might lead lonely lives, the whale calls tell another story—they are talking all the time.

In fact, hearing is probably the blue whales’ most important way to sense their environment; their eyesight and sense of smell seem to be very limited. Big blues’ ears are very far apart—about 15 feet (4.6 m)—but this is a perfect design for using sound to determine the location of their friends.

Two whales calling at the same frequency can gauge each other’s distance and direction by the intensity of the incoming sound—just as we can determine where a car is by the different sounds it makes as it moves toward us or away. Some scientists believe that big blues may also use sound to locate krill feeding areas.

But one of the greatest mysteries of blue whales is how they produce sound so intense that it can be heard for hundreds of miles. Like other creatures, they have a throat or larynx for amplifying sound, but researchers have not found a voice box for making sound.

Jonah in the Big Blue?

Could Jonah have been swallowed by a blue whale? Creationists are not entirely sure what kind of great sea creature swallowed Jonah.2 The big blue certainly is a candidate since it has a very large capacity.

What a marvelous picture of how our great Savior Jesus Christ can save any one of us from the entanglement and crushing weight of sin.

Also, we know from the biblical account that Jonah sank to the depths of the ocean. Big blues dive deep before they come up to capture their prey. It is also believed that the whales need to take in large volumes of air to make such massive sounds. So Jonah would have had plenty of room, food, and air inside a big blue; and he would have had no large teeth to contend with.

But more important, we know for sure that because of God’s mercy, Jonah was rescued as he was tangled in the depths of the ocean, and he was not crushed by the massive creature, as he easily could have been. What a marvelous picture of how our great Savior Jesus Christ can save any one of us from the entanglement and crushing weight of sin, no matter how deep we have sunk, if we will only call out to Him (see Jonah 2:1–7)!

Dr. Joe Francis, Professor of Biological Sciences at The Master’s College earned his PhD from Wayne State University and completed a post-doctoral fellowship at the University of Michigan Medical School. Dr. Francis serves as a board member of the CBS (a creation biology study group).
Next Article The Language of Life