The earliest animals, not plants, promoted oxygenation of the oceans, scientists say.

What came first, oxygen or animals? Because plants manufacture oxygen through photosynthesis, evolutionists have long answered “plants” (or at least photosynthesizing microbes). Traditional evolutionary theory maintains that plants had to increase the oxygen content of the atmosphere enough to oxygenate the deep oceans before complex animals could evolve there.

No more! In the wake of a study from Denmark showing that sponges can get along quite nicely on abysmally low oxygen levels, an analysis published in Nature Geoscience asserts that earth’s (supposed) earliest animals—sponges—were responsible for oxygenating the world’s deep oceans.

Evolutionists suppose that sponges—the first multicellular animals—evolved around 850 to 635 million years ago, drawing a billion-year evolutionary hiatus, stalled at the unicellular stage, to a close. The “Cambrian explosion” is the “subsequent” and “sudden” appearance of a diverse collection of complex marine invertebrates and even some vertebrates in rock layers conventionally dated around 541 to 515 million years ago. This study, like another published in September 2013 in Science, attempts to determine what interplay of conditions could have promoted the explosive evolution of complex multicellular animals.

Turning traditional evolutionary theory on its head, lead author Timothy Lenton, says, “We argue that the evolution of the first animals could have played a key role in the widespread oxygenation of the deep oceans. This in turn may have facilitated the evolution of more complex, mobile animals.” Lenton and colleagues believe the evolution of multicellular sponges put an end to the “‘boring billion’ (circa 1,850–850 Ma), so-called for the apparent slow pace of biological evolution and a widely assumed stasis in atmosphere–ocean oxygenation state.”1 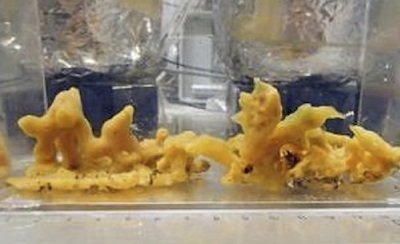 Because a recent study of these sponges showed that sponges can thrive in abysmally anoxic conditions, evolutionists are now scrambling to figure out what made animal evolution possible. A new analysis suggests the first animals to evolve—sponges—created conditions that led to oxygenation of the oceans, paving the way for ongoing evolution. Image by Daniel Mills/SDU, via TerraDaily.2

The authors believe the “boring billion” finally ended because sponges evolved in the shallow water of continental shelves and triggered widespread oceanic oxygenation. They suggest these filter-feeders, by clearing light-blocking debris, promoted greater photosynthetic oxygenation of shallow waters by phytoplankton.3 But sponges did not just affect their own environment; they altered the contents of water circulating into the deeper oceans below. By removing lots of small phytoplankton like cyanobacteria, sponges selectively promoted the increase in the population of large eukaryotic algae. By consuming a lot of plankton and any other organic debris before it could sink and also by removing a lot of dissolved phosphate nutrients from the water, sponges reduced the amount of nutrients and phytodetritus (organic debris) that sank into the deep ocean. Without a lot of dead plankton to munch on, aerobic microbes at the bottom of the sea didn’t use as much oxygen, so the oxygen levels in the deep ocean had time to build up. Finally, when those oxygen levels were high enough, evolutionary complexity could explode there too.

“There had been enough oxygen in ocean surface waters for over 1.5 billion years before the first animals evolved, but the dark depths of the ocean remained devoid of oxygen,” Lenton explains. “By oxygenating more of the bottom waters of shelf seas, the first filter-feeding animals inadvertently increased the removal of the essential nutrient phosphorus in the ocean. This in turn reduced the productivity of the whole ocean ecosystem, suppressing oxygen demand and thus oxygenating the deep ocean.”

These now-oxygenated waters, both deep and shallow, presumably provided the ideal environment for increasingly complex multicellular animals to evolve. Lenton says, “The effects we predict suggest that the first animals, far from being a passive response to rising atmospheric oxygen, were the active agents that oxygenated the ocean around 600 million years ago. They created a world in which more complex animals could evolve, including our very distant ancestors.”

The Anoxic Leap to Multicellulariy

Sponges, because they lack tissue differentiation, are considered by evolutionists to be the most primitive animals. But what promoted the evolution of Eumetazoa—animals composed of cells organized into tissues and organs? The authors suggest an answer to this conundrum too. Paradoxically, terribly anoxic conditions triggered the evolution of eumetazoans in the first place. These anoxic condition, so the story goes, made things so bad for many microbes that they finally evolved into multicellular creatures in self-defense.

The transformation of microbes into multicellular animals is never seen in biology, regardless of conditions.

“Given that oxygen availability was not a significant constraint on animal evolution, what else can explain the delayed and dramatic appearance of this singularly influential clade?”4 they write. Could it be “that there was no external impetus for animal proliferation?”5 they ask. Perhaps, “It simply took a long time to evolve the uniquely complex gene regulatory networks necessary to build tissue- and organ- grade animals. However, the developmental evolution required involves significant changes in cellular differentiation, and an alternative perspective is that exceptional selection pressures were necessary to explain the origin of Eumetazoa.”6

The “exceptional selection pressure” of severe anoxia, they suggest, may have repeatedly reduced microbial populations to small groups in which only those cells that were beginning to differentiate and cooperate survived. Eumetazoans were born because survival necessitated companionship.7 Then, after the sponges (which had also evolved in low oxygen conditions) triggered oxygenation of the seas, primitive eumetazoans could get on with the business of evolving into us.

The researchers did no actual laboratory research. Rather, their study was a sort of “thought experiment.” The authors acknowledge that the oxygen conditions in the deep ocean throughout these times are unknown and need further investigation to confirm their ideas. “This study provides a plausible mechanism for ocean oxygenation without the requirement for a rise in atmospheric oxygen,” says co-author Simon Poulton. “It therefore questions whether the long-standing belief that there was a major rise in atmospheric oxygen at this time is correct. We simply don't know the answer to this at present, which is ultimately key to understanding how our planet evolved to its current habitable state. Geochemists need to come up with new ways to decipher oxygen levels on the early Earth.”

In other words, this is just a nice little story.

The purpose of this “study” is to explain what ecological interactions made molecules-to-man evolution possible. Yet neither the transformation of microbes into multicellular animals nor the evolution of multicellular animals into new and more complex kinds of animals is seen in biology, regardless of conditions. It makes little sense to assume that conditions in the past could have promoted biological events that are never observed today.

Habitable and Inhabited from the Beginning

On the other hand, if we accept God’s eyewitness account in the Bible declaring that He created a habitable earth and all kinds of living things about 6,000 years ago within the course of just six days—and that He created each kind of living thing to reproduce and vary only within its own kind—then we have no trouble understanding the existence of biological diversity. Furthermore, the presence of microfossils very deep in the earth’s geological layers and then the “Cambrian explosion” of many multicellular organisms above those layers is easily understood from a model of the earth’s history drawn from the Bible.

The very deepest geological layers are most likely remnants of the rock that were present before the global Flood. Microfossils of some ancient microbes likely formed in the comparatively quiescent waters of the pre-Flood world and are seen in some of the deeper layers of the fossil record. The cataclysmic upheavals of the global Flood would have created many additional layers in the fossil record as violent floodwaters overwhelmed various habitats and sorted and buried their inhabitants beneath tons of sediment.

Biblical history of Creation and the global Flood explain the origin of life and what we see in the fossil record. Because we can trust what God’s Word tells us about our physical history, we can also trust what it tells us about our spiritual history—that we are sinful rebels against our holy Creator, that we deserve condemnation, and that God our Creator has made salvation freely available to us through the sacrificial death of His Son Jesus Christ because He loves us. Thus the Bible also tells us how to have an abundant life and to be sure of our eternal destiny (John 3:16 and John 10:10).