Toothed Bird Adds to Avian Biodiversity in Age of Dinosaurs

A toothy robin-sized bird has been identified in the Early Cretaceous Chinese Jehol Group in northeastern China.

The bird is a previously unidentified species, Sulcavis geeorum, but it appears to be an enantiornithine, a group of extinct birds represented by many species. The bird’s teeth are well-enameled with enamel extending into grooves on the teeth. 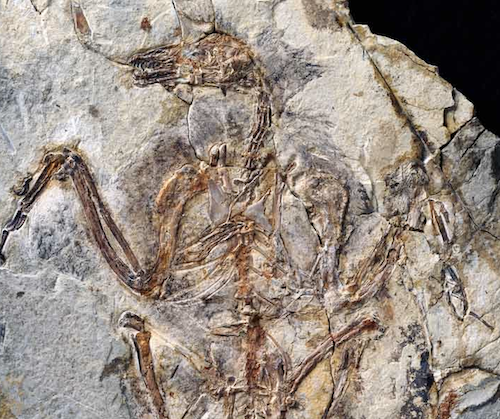 This fossilized bird from Cretaceous rock in China's Jehol Group has sharp teeth with enamel. The bird lived at the same time as dinosaurs. The researchers studying the bird suggest that it was therefore well-equipped for handling hard food items. (Contrary to media reports, this specimen was not found with preserved stomach contents.) Image credit: Stephanie Abramowicz through www.livescience.com.

These close-up photos show this enantiornithine bird's sharp teeth. Evolutionists consider these teeth, which have well-preserved grooves and a coating of protective enamel, to be highly evolved. However, nothing about the discovery suggests these teeth or this bird evolved from any other kind of animal. The bird's well-designed teeth reveal the hand of our Creator, who made all kinds of birds, including the toothed kinds that are now extinct, on the fifth day of Creation week. Image credit: Photos from J. O'Connor et al., “A new enantiornithine from the Yixian Formation with the first recognized avian enamel specialization,” Journal of Vertebrate Paleontology (2013) www.tandfonline.com

This fossil has larger teeth than those found on other enantiornithines. The teeth appear sharp and have grooves on the lingual surface. There are other types of extinct toothed birds, but this tooth enamel is an attention-getter because, as the authors of the report in the Journal of Vertebrate Paleontology write, “No previously recognized avian specimen is known to possess any form of enamel ornamentation or specialization.”1

Although the LiveScience article states that the fossil “was so well preserved that some of its stomach contents were still present,” this is evidently an error. The authors of the journal article do not report stomach contents. Instead, they report being pleased to see such well-preserved teeth because they hope the teeth will provide a clue about what the bird ate. They write, “Compared with other Mesozoic groups, stomach contents are hardly ever preserved within enantiornithine specimens; therefore, this new tooth morphology reveals new evidence regarding the diversity of trophic niches occupied by the clade.”3 Only two known enantiornithine fossils preserve stomach contents, one with crustacean exoskeletal parts and another with bits of amber (dried tree sap), and they were not found in China.4 The authors conclude, based on the tooth shape and protective enamel, that “Sulcavis geeorum may have been especially well adapted for a diet of hard food items relative to other Jehol birds.”5

Birds with teeth are now extinct, as are some toothless birds. And research suggests that even toothless birds do have genes for teeth but that they are not expressed—are “turned off”—in modern birds.6 But these facts do not provide proof for bird evolution. Chiappe explains one flaw in evolutionary thought about why birds supposedly de-evolved their teeth, saying, “The traditional view is that teeth are heavy, and the birds evolved beaks as a way of making their bodies lighter. These teeth are pretty small and it's hard to imagine that they had such a huge impact on the weight of the animal.”

Evolutionists contend that birds lost their teeth at least four times based on where they appear in the fossil record. However, many layers of the fossil record preserve animals in the order their habitats were overcome by the rising waters of the global Flood of Noah’s time. Therefore, those layers are a timeline of habitat destruction and death over a short period of time, not a timeline of evolution of new kinds of animals over millions of years.

There is nothing about the fossil evidence to demonstrate anything about the evolution of birds from other kinds of creatures. Instead, what we see here is a well-developed set of teeth on an extinct bird that coexisted with dinosaurs. Stripped of tales of millions of years and notions about non-birds evolving into birds—never-observed, worldview-based contentions that are scientifically unverifiable because they are untestable—this bird’s teeth serve as a testimony to the truth of the Genesis account of creation. God’s record of creation says that He created all kinds of creatures in the beginning, not as evolved products built on the templates of simpler creatures but fully mature and able to reproduce after their kinds.