Did Tiktaalik’s Pelvis Prepare Fish to Walk on Land?

The alleged role of the rear end of ancestral fish in the evolution of terrestrial ambulation has been unveiled by discovery of the hitherto unseen posterior portion of the famous fish, Tiktaalik. Evolutionists, like The Incredible Mr. Limpet of fictional movie fame, believe fish evolved into terrestrial vertebrates and eventually into us. Tiktaalik, an extinct lobe-finned fish, was hailed in 2006 as the missing link in this process. Up until now evolutionists thought that Tiktaalik‘s front fins took the lead by hauling the iconic transitional fish up onto land, leaving the matter of evolving strong hind legs until later. 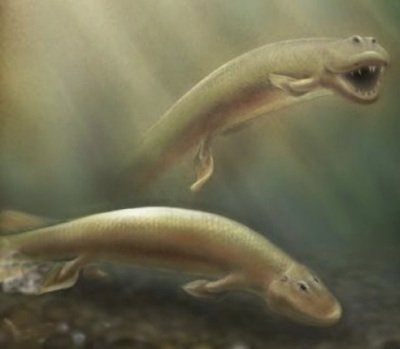 Now that they’ve gotten a good look at Tiktaalik roseae’s sturdy pelvis and pelvic fins, Tiktaalik’s discoverers have updated their sketch of it to show that it had plenty of paddling power in its posterior parts. In fact, the evolutionary imagination accords this fish’s hind-parts so much power, they believe it was ready for “pelvic-propelled locomotion”1 across the terrestrial world and up the evolutionary tree. Image by University of Chicago, Neil Shubin, though ScienceDaily.

Mermaid Theory Is Out

“Previous theories, based on the best available data, propose that a shift occurred from ‘front-wheel drive’ locomotion in fish to more of a ‘four-wheel drive’ in tetrapods,” explains University of Chicago anatomy professor Neil Shubin, lead author of the study just published in the Proceedings of the National Academy of Sciences. “But,” he says, “it looks like this shift actually began to happen in fish, not in limbed animals.”

In their article, “Pelvic girdle and fin of Tiktaalik roseae,” Shubin and colleagues describe a pelvis and a partial pelvic fin, parts of a nearly complete Tiktaalik specimen from the Canadian Arctic. They believe these parts show that ancient lobe-finned fish prepared the evolutionary way for terrestrial vertebrates to push off on their strong hind legs rather than just dragging themselves along like beached mermaids.

Shubin and colleagues found Tiktaalik fossils, each about nine feet long, on Ellesmere Island in 2004. The lobe-finned fish had a flattened, crocodile-like head with sharp teeth and nostrils. Tiktaalik‘s bony lobed fins and sturdy pectoral girdle seemed to answer the evolutionists’ quest for a fish ready to walk out of water. Shubin’s team declared Tiktaalik to be a missing link between terrestrial vertebrates (like humans) and our alleged aquatic ancestors.

“This animal represents the transition from water to land—the part of history that includes ourselves,”2 said Shubin. He thought that Tiktaalik could have even walked on land as part of its transitional lifestyle, with the availability of invertebrate prey on land providing an incentive to evolve. Some modern fish can scoot from pool to pool across land, presumably providing a living model of this transitional feat.

Evolutionists declare that Tiktaalik is a transitional form because it has sturdy ribs, a flexible neck, and nostrils in addition to bony fins with strong skeletal support. (Fish, of course, do have nostrils and ordinarily use them for smelling.) They could not see any reason why a fish would have evolved such a robust set of ribs and fin support unless the fish needed to support itself out of the water without the aid of aquatic buoyancy. Initially, without Tiktaalik’s pelvis to examine, Shubin thought Tiktaalik’s front led the way to terrestrial evolution with Tiktaalik pulling itself out of the water using its front lobed fins. Shubin said Tiktaalik used its mighty fins “to prop its body, much like we do when we do a push-up.”3

“Pelvic-Propelled Locomotion” up the Evolutionary Tree?

The “walking fish” has become a symbol of the evolutionary worldview. No fish, however, not even the latest Tiktaalik fossil, has feet or legs. This Darwinian symbol stands in contrast to the fish symbol used by many early Christians to identify themselves to one another in a world violently hostile to the worship of Jesus Christ. This contrast continues today, for the world today remains hostile to the truth that Jesus Christ is the one and only Creator (Colossians 1:16–19) and Savior. Images: Tiktaalik and the Fishy Story of Walking Fish, Part 2 (left); Wikipedia (right)

The newly discovered size and shape of Tiktaalik’s pelvis has generated much excitement on Shubin’s team. They write, “Tiktaalik reveals that features contributing to the trend toward pelvic-propelled locomotion in the tetrapodomorph [four-legged vertebrates] stem began emerging in finned taxa before being enhanced in more derived digital forms.”4 In other words, they believe that Tiktaalik’s pelvis is evidence that when fish crawled out of the water to evolve into terrestrial animals, they were ready to hoist their hindquarters up and walk with strong hips and legs rather than dragging themselves around awkwardly for a few million years on their front flippers. Tiktaalik thus provides, in their view, the model for “pelvic-propelled locomotion”5 across land and up the evolutionary tree.

“This is an amazing pelvis, particularly the hip socket, which is very different from anything that we knew of in the lineage leading up to limbed vertebrates,” says coauthor Edward Daeschler. Daeschler says the “hip socket” is “very different” from that of other lobe-finned fish because it is rounder and deeper.6 “Tiktaalik was a combination of primitive and advanced features,” he says. “Here, not only were the features distinct, but they suggest an advanced function. They appear to have used the fin in a way that’s more suggestive of the way a limb gets used.”

Putting the Pelvis in Perspective

Tiktaalik‘s pelvic girdle is similar in size to its shoulder girdle. Fish often have pectoral and pelvic girdles of unequal size, so this surprise was viewed as evidence for leg evolution. The bony pelvis has crests that could have provided points of attachment for strong muscles, which are as valuable to swimmers as to walkers and therefore add nothing to the evolutionary argument.

Terrestrial animals, including amphibians, have a pelvic girdle composed of three fused bones. However, just like the pelvis of other lobe-finned fish, the Tiktaalik pelvis was a one-piece configuration. Also, like other lobe-finned fish, Tiktaalik had an acetabulum. But evolutionists doggedly view Tiktaalik as a transitional form. Because Tiktaalik’s pelvis was large and its skeletal features well-defined, evolutionists believe Tiktaalik was able to “experiment” with walking and advance vertebrate evolution landward.

A “robust” pelvic girdle with long-rayed pelvic fins in an extinct lobe-finned fish is not, however, evidence of ambulatory evolution, just evidence that Tiktaalik was as sturdy and strong on its back end as on its front. For a nine-foot-long fish, this would seem to be a good design.

What was Tiktaalik doing with its generously proportioned pelvic fins and robust pelvis? Shubin says, “It's reasonable to suppose with those big fin rays that Tiktaalik used its hind fins to swim like a paddle. But it's possible it could walk with them as well. African lungfish living today have similarly large pelves, and we showed in 2011 that they walk underwater on the bottom. Regardless of the gait Tiktaalik used, it's clear that the emphasis on hind appendages and pelvic-propelled locomotion is a trend that began in fish, and was later exaggerated during the origin of tetrapods.”

Thus even Shubin admits that Tiktaalik may have just been using its sturdy pelvis and fins to swim. Then he leaps to what he believes was “possible” by referring to Tiktaalik’s “gait” as if the fish was obviously taking a stroll. From this imaginative possibility he then draws “clear” conclusions.

What is clear is how evolutionary interpretations are being superimposed on a perfectly fine extinct fish.

Tiktaalik was well-equipped for life as a lobe-finned fish. Tiktaalik could probably even out-paddle its competitors. Whether Tiktaalik used its anatomy to paddle with power or to scoot about like some living fish do, there is no reason to claim it was transitioning into a non-fish. Shubin’s assertion that his discovery makes it “clear” that terrestrial ambulation got its start in the pelvis of a fish is presumptuously overstated. What is clear, rather, is how evolutionary interpretations are being superimposed on a perfectly fine extinct fish.

No matter what sort of locomotion Shubin and colleagues imagine for Tiktaalik or how robust its pelvic girdle, it still lacked essential structures for actual ambulation, like a sacral attachment to the vertebral column7 and legs. The authors write that “the mosaic of primitive and derived features”8 confirms “a trend toward hind limb-based propulsion”9 in terrestrial vertebrates. However, these features only demonstrate that Tiktaalik was a fish with a sturdy posterior, not a transitional tetrapod.

Living lungfish, a lobe-fish which pops its head up out of water to grab a breath, can push itself up. Shubin considers this ability to be a model precursor to terrestrial ambulation. You can read more about Shubin’s interpretation of the the significance of lungfish behavior in “Lungfish Lope Along.” In fact, many specialized species of living fish are designed to breathe air and scoot about between shallow pools using their fins. Evolutionists don’t claim them as our evolutionary ancestors, but they adopted Tiktaalik as our cousin right out of the rocks.

God created all kinds of fish on the 5th day of Creation Week about 6,000 years ago. The very next day, God tells us in His recorded Word, He created all kinds of land animals. Thus, on God’s authority Christians should understand that millions of years did not transpire and that God did not use evolution.

Neither did evolution produce increasingly complex kinds of animals through natural processes. Biological observation has never shown how such a thing could actually happen, so assuming that evolution produced all sorts of life is an insupportable imaginative atheistic answer to the question of origins. On the other hand, biological observation does show that animals reproduce and vary only within their created kinds, just as the Bible describes in the first chapter of Genesis. A well-designed powerful lobe-finned fish’s pelvis does not change, or even challenge, the truth of God’s Word.