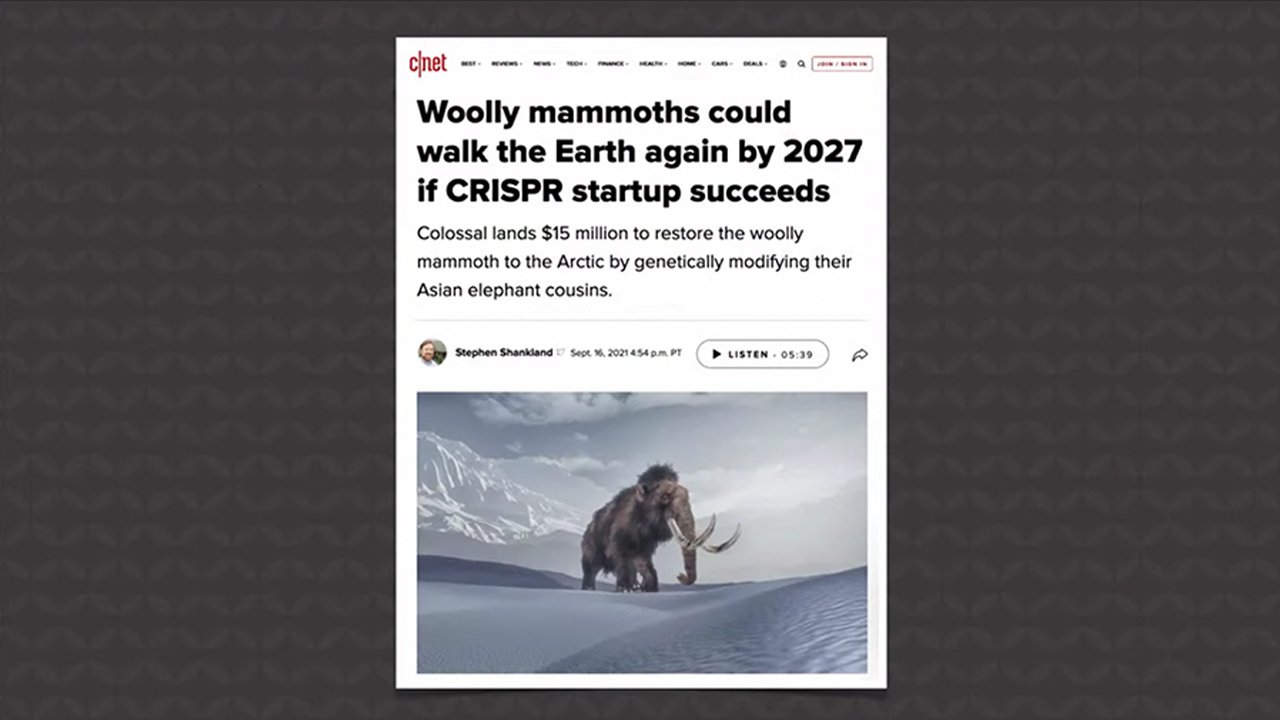 One start-up has a lofty goal—to “resurrect” the woolly mammoth by 2027 . . . sort of. You see, if successful, it will not be a true woolly mammoth like those that lived during the post-flood ice age but, rather, a modern elephant with edited genes (thanks to the “molecular scissors” technology CRISPR)—giving it smaller ears, more body fat, and the ability to survive the cold Arctic tundra.

The company hopes that their hybrids will start having calves within four to six years and that artificial wombs will eventually help bolster large-scale herds to roam an area of Arctic Russia. But, to them, this is more than an interesting science experiment. They’re hoping the “mammoth” herds will have a positive environmental impact and help fight climate change.

One Zimov idea is that woolly mammoths will trample snow and knock down trees. That, in turn, will restore grasslands that reflect more of the sun’s warming rays and eliminate insulating snow and forests so the ground cools more. And that means the ground will stay frozen instead of releasing its current store of carbon dioxide and methane greenhouse gases.

If they’re successful, they want to try restoring the woolly rhino (another ice age creature) next.

Now, how do we understand woolly mammoths and elephants in a biblical worldview? Well, we understand they are from the same created kind. You see, God created creatures to reproduce according to their kinds, but there’s a lot of genetic diversity within a kind so creatures can adapt and spread out around the earth. God gave the original elephant kind the genetic diversity to produce mammoths, Asian elephants, African elephants, and many other species that have since gone extinct. This allows them to fill different environments such as the Arctic tundra, savannahs of Africa, or the forests of Asia. It’s all part of God’s “very good” design.

Oh, and the ice age was caused by the flood. And since the ice age peaked several hundred years after the flood, the earth has been settling down from the effects of the flood and catastrophic ice age. If people don’t accept the true history of the earth from the Bible, they won’t understand why, for example, many glaciers have been melting. Regardless, God made this promise:

While the earth remains, seedtime and harvest, cold and heat, summer and winter, day and night, shall not cease (Genesis 8:22).

You can learn more about “de-extinction” from a biblical worldview in “Why Bring Back Extinct Species?”

This item was discussed yesterday on Answers News with cohosts Roger Patterson, Bodie Hodge, and Tim Chaffey. Answers News is our twice-weekly news program filmed here at the Creation Museum and broadcast on my Facebook page and the Answers in Genesis Facebook page. We also covered the following intriguing topics:

Watch the entire episode of Answers News for September 22, 2021.