Unicorns in the Bible?

To think of the biblical unicorn as a fantasy animal is to demean God’s Word, which is true in every detail.

Some people claim the Bible is a book of fairy tales because it mentions unicorns. However, the unicorns in the bible were real animals, not imaginary creatures. The Bible refers to the unicorn in the context of familiar animals, such as peacocks, lambs, lions, bullocks, goats, donkeys, horses, dogs, eagles, and calves (Job 39:9–12).1 In Job 38–41, God reminded Job of the characteristics of a variety of impressive animals He had created, showing Job that God was far above man in power and strength.2

Job had to be familiar with the animals on God’s list for the illustration to be effective. God points out in Job 39:9–12 that the unicorn, “whose strength is great,” is useless for agricultural work, refusing to serve man or “harrow (plow) the valley.” This visual aid gave Job a glimpse of God’s greatness. An imaginary fantasy animal would have defeated the purpose of God’s illustration.

Modern readers have trouble with the unicorns in the Bible because we forget that a single-horned feature is not uncommon on God’s menu for animal design. (Consider the rhinoceros and narwhal.) The Bible describes unicorns skipping like calves (Psalm 29:6), traveling like bullocks, and bleeding when they die (Isaiah 34:7). The presence of a very strong horn on this powerful, independent-minded creature is intended to make readers think of strength. 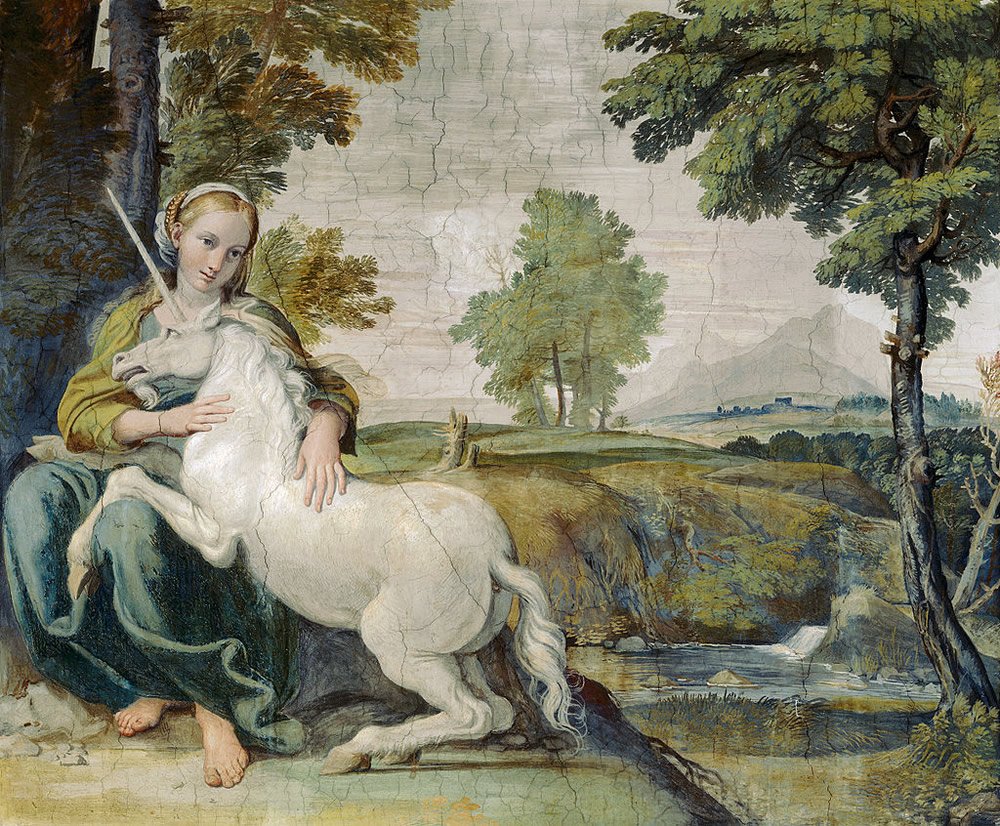 The absence of a unicorn in the modern world should not cause us to doubt its past existence. (Think of the dodo bird. It does not exist today, but we do not doubt that it existed in the past.) Eighteenth century reports from southern Africa described rock drawings and eyewitness accounts of fierce, single-horned, equine-like animals. One such report describes “a single horn, directly in front, about as long as one’s arm, and at the base about as thick. . . . [It] had a sharp point; it was not attached to the bone of the forehead, but fixed only in the skin.”3

The elasmotherium, an extinct giant rhinoceros, provides another possibility for the unicorn’s identity. The elasmotherium’s 33-inch-long skull has a huge bony protuberance on the frontal bone consistent with the support structure for a massive horn.4 In fact, archaeologist Austen Henry Layard, in his 1849 book Nineveh and Its Remains, sketched a single-horned creature from an obelisk in company with two-horned bovine animals; he identified the single-horned animal as an Indian rhinoceros.5 The unicorns in the Bible could have been the elasmotherium.6

Assyrian archaeology provides one other possible solution to the unicorn identity crisis. The biblical unicorn could have been an aurochs (a kind of wild ox known to the Assyrians as rimu).7 The aurochs’s horns were symmetrical and often appeared as one in profile, as can be seen on Ashurnasirpal II’s palace relief and Esarhaddon’s stone prism.8 Fighting rimu was a popular sport for Assyrian kings. On a broken obelisk, for instance, Tiglath-Pileser I boasted of slaying them in the Lebanese mountains.9

Extinct since about 1627, aurochs, Bos primigenius, were huge bovine creatures.10 Julius Caesar described them in his Gallic Wars as,

. . . a little below the elephant in size, and of the appearance, color, and shape of a bull. Their strength and speed are extraordinary; they spare neither man nor wild beast which they have espied. . . . Not even when taken very young can they be rendered familiar to men and tamed. The size, shape, and appearance of their horns differ much from the horns of our oxen. These they anxiously seek after, and bind at the tips with silver, and use as cups at their most sumptuous entertainments.11

The aurochs’s highly prized horns would have been a symbol of great strength to the ancient Bible reader.

One scholarly urge to identify the unicorns in the Bible with the Assyrian aurochs springs from a similarity between the Assyrian word rimu and the Hebrew word re’em. We must be very careful when dealing with anglicized transliterated words from languages that do not share the English alphabet and phonetic structure.12 However, similar words in Ugaritic and Akkadian (other languages of the ancient Middle East) as well as Aramaic mean “wild bull” or “buffalo,” and an Arabic cognate means “white antelope.”

To think of the biblical unicorn as a fantasy animal is to demean God’s Word, which is true in every detail.

However, the linguistics of the text cannot conclusively prove how many horns the biblical unicorn had. While modern translations typically translate re’em as “wild ox,” the King James Version (1611), Luther’s German Bible (1534), the Septuagint, and the Latin Vulgate translated this Hebrew word with words meaning “one-horned animal.”13

The importance of the unicorns in the Bible is not so much their specific identity—much as we would like to know—but their reality. The Bible is clearly describing a real animal. The unicorn mentioned in the Bible was a powerful animal possessing one or two strong horns—not the fantasy animal that has been popularized in movies and books. Whatever it was, it is now likely extinct like many other animals. To think of the biblical unicorn as a fantasy animal is to demean God’s Word, which is true in every detail.

Previous Chapter What About Bacteria? Next Chapter Doesn’t the Bible Support Slavery?