Did Archaeopteryx Evolve Flight and Then Get Grounded?

Archaeopteryx gets its walking papers at Los Angeles conference.

Archaeopteryx, an extinct bird represented by at least eleven excellent feathered specimens, has been the topic of many debates in evolutionary circles. Bird versus dinosaur? “Proto-bird” or transitional form? The first bird to evolve or a late-comer? Able to take off or limited to gliding? Evolving the ability to fly or completely flightless? A prototype for analyzing the origin of bird flight, or an insignificant bystander? The Los Angeles annual meeting of the Society of Vertebrate Paleontology just heard a new one, though. University of Southern California biologist Michael Habib proposed that Archaeopteryx had previously evolved flight capability but was making the transition back to flightlessness.

To Fly Or Not To Fly

Habib said the idea that Archaeopteryx was “secondarily flightless” occurred to him while he was comparing the degree of feather asymmetry and the limb ratios of Archaeopteryx to living birds.

Fossils of course do not fly. Since the modern world offers plenty of flying and flightless birds to study, paleontologists trying to determine the likelihood that an extinct creature like Archaeopteryx could fly and how must compare the fossilized details to the anatomical parameters of modern creatures. Habib says the Archaeopteryx anatomy is quite similar to the anatomy of modern flightless island-dwelling birds like rails and grebes.

“We know Archaeopteryx was living on an archipelago during the Jurassic,” Habib says. “And with its feathers and bones looking so much like modern flightless island birds, it just makes me wonder.” Habib found the idea somewhat surprising and in his blog notes that he still isn’t fully convinced. “I pitched the idea that Archaeopteryx might have been secondarily flightless, instead of incipiently flighted,” he writes. “It's not something I'm convinced of, but I do think it should [be] considered in our range of hypotheses.”1 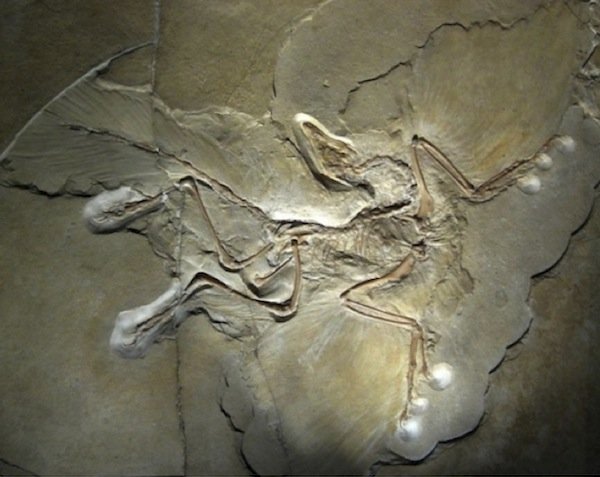 The modern appearing feathers of Archaeopteryx attest to the fact it is an extinct bird, though it also has some unusual features like claws on its wings and teeth.2 Its German name means “first bird,” reflecting the fact that for a long time evolutionists thought it was the first bird to evolve. Paleontologists debate whether Archaeopteryx, conventionally dated at about 150 million years, could truly fly. Many suspect on the basis of its skeleton that it could not flap and had to confine its aerial activities to gliding. Because it shares some features with modern flightless birds, a new evolutionary proposal suggests its ancestors evolved the ability to fly and then lost that ability by the time Archaeopteryx evolved. Image by Soerfm, via Wikipedia Commons.

Archaeopteryx fossils combine some unusual traits with many features of modern birds including asymmetrical feathers such as would be needed to generate lift. However, some experts suspect its aerodynamic maneuvers were limited by its skeletal structure to gliding due to the low likelihood that it could have flapped its wings upward. Debate about the aerodynamic capabilities of Archaeopteryx is ongoing.

Of course, plenty of modern birds are flightless. So why would a flightless Archaeopteryx be surprising or controversial? And why does Habib propose that it was secondarily flightless? Why not just flightless from the beginning?

Evolutionists generally believe that flying birds evolved and later diverged independently into several flightless lineages. Conventionally dated at about 150 million years, the Archaeopteryx was once considered the first bird to evolve. For it to have lost its flight capability would beg the question of when birds really did evolve, since the usual evolutionary scenario demands flying birds evolved first. But since most evolutionists now believe Archaeopteryx has abdicated its claim to being the oldest bird, in favor of Xiaotingia, the secondarily flightless business isn’t quite as much of a stretch as it once would have been.

“Just because Archaeopteryx was the first feathered dinosaur found, [a reference to the deceptive and convenient reclassification of birds as dinosaurs based on evolutionary beliefs, not observable biology] doesn’t mean it has to play a central role in the actual history of the origins of birds,” explains palaeontologist Thomas Holtz of the University of Maryland in College Park. “We have to remember it appears 10 million years or so after the oldest known bird-like dinosaurs and so our famous ‘first bird’ may really be a secondarily flightless one.”

Others are less sanguine about Habib’s proposal. “I am wary to call Archaeopteryx secondarily flightless,” says biologist Ashley Heers of the Royal Veterinary College in Hatfield, UK, “since we do not yet know if its ancestors could fly. Living birds use their wings for so many different things, like flap-running up slopes and rowing across water,” says Heers. “We really need an improved understanding of how anatomy relates to these diverse behaviours, so we can better interpret the fossil record.” Others even point out that there are some modern birds that fly as juveniles and diminish or lose the ability to fly with maturity. “Perhaps young Archaeopteryx flew,” Holtz suggests, “but adults were more ground-based.”

The latter possibility—the idea that a bird’s behavior and abilities might change as it matures—has nothing whatever to do with evolutionary ideas.

The latter possibility—the idea that a bird’s behavior and abilities might change as it matures—has nothing whatever to do with evolutionary ideas. In fact, the possibility that Archaeopteryx was flightless for part or all of its life might rattle some evolutionary paradigms or alter its position in the evolutionary effort to trace the evolution of flight, but it is not a particularly earth-shaking concept from a biblical creationist point of view.

We see several flightless designs in today’s birds. The penguin is of course well suited for its life as a seabird. Some flightless birds have short wings, an unusual distribution of feathers, feathers with greater symmetry than that those of flying birds, and in some cases a lack of the bony keel in the chest. But there is no reason to assume these birds started out as flying birds and then got grounded. These birds appear to be designed to be flightless and fill a specific niche in the world.3

God created many kinds of birds on the 5th day of Creation week, just 6,000 years ago, all fully fitted out with feathers and the abilities and anatomy that suited the habitats and lifestyles for which He designed them. That some were designed to be flightless is not a problem.

Previous Article The History Channel Lost the Truth of God’s Word in Bible Secrets Revealed Next Article What Makes Us Human?