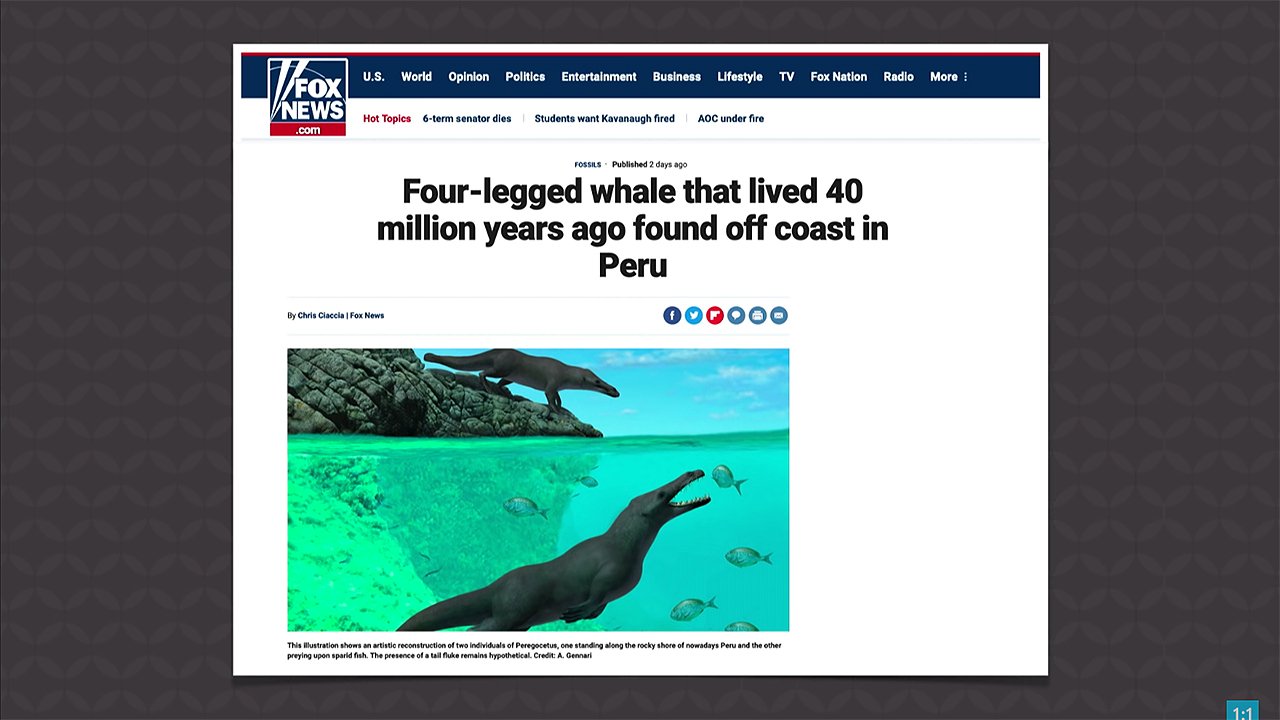 A recent journal article published by Current Biology, features the discovery of a fossil (MUSM 3580) touted as a “walking whale,” in the Pisco Basin, located in the desert of the southern coast of Peru, South America. The initial fossil find occurred in 2011 with subsequent bones of the specimen excavated and collected in 2013 and 2015. Peregocetus pacificus is the name that was given to this new “protocetid” which was discovered in middle Eocene (conventionally dated at 42.6 MY) diatomaceous siltstones with the two lower-most fossils collected from underlying sandstone.

The paper mentions that the newly-discovered Peregocetus was a quadruped and the fossil reconstruction shows hips that are attached to its vertebral column. It has been interpreted as a semi-aquatic mammal, like an otter or a beaver. According to the paper:

“Preserving the mandibles and most of the postcranial skeleton, this unique four-limbed whale bore caudal [tail] vertebrae with bifurcated and anteroposteriorly expanded transverse processes [lateral bony projections on the tailbones], like those of beavers and otters, suggesting a significant contribution of the tail during swimming”.1

The paper also astutely mentions that the animal was fully capable of walking on land and had hooves. But of course, the researchers have to interpret the skeleton as being that of a walking whale.

“The fore- and hind-limb proportions roughly similar to geologically older quadrupedal whales from India and Pakistan, the pelvis being firmly attached to the sacrum, an insertion fossa for the round ligament on the femur, and the retention of small hooves with a flat anteroventral tip at fingers and toes indicate that Peregocetus was still capable of standing and even walking on land”.2

Despite admitting that Peregocetus had hooves, the paper then goes on to affirm that they likely consider it to have webbed fore and hind-paws.

Despite admitting that Peregocetus had hooves, the paper then goes on to affirm that they likely consider it to have webbed fore and hind-paws. This seems an unlikely anatomical pairing—there are no living hooved, yet web-footed semi-aquatic mammals.

All these shared features suggest similar terrestrial locomotion abilities for this younger protocetid from the Pacific Ocean, with the hind limbs capable of bearing the weight of the body on land. In addition, the presence of large pes with elongated fingers and the dorsoplantar flattening of the phalanges with conspicuous lateral flanges [bones splayed outward] indicating webbed pes [feet] (also observed on manus [fore-paws]) suggest that hind limbs were actively used for swimming. Propulsive movements were either alternate or simultaneous hind-limb paddling or body and tail undulations, as observed in modern river and sea otters, alternating between lift-based propulsion via pelvic undulations, including tail and hind limbs, and drag-based propulsion via independent strokes of the hind limbs.3

Earmarks of a Whale?

Looking over the 40 fossils which make up this incomplete skeleton, we note that much is missing.

Peregocetus is a fairly large animal estimated to be over 4 meters long (13 ft.), slightly larger than the 2.6 m (8.5 ft. long) Maiacetus. Now, looking over the 40 fossils which make up this incomplete skeleton, we note that much is missing. Very little of the skull was preserved, (except the lower jaw), there are none of the neck vertebrae, and only one thoracic vertebra, two small sternum bones, two sacral vertebrae, one anterior caudal (tail) vertebra, a couple of small sternum bones and fragmentary fore-limb, leg and foot bones were preserved. Much of the middle portion, as well as the top of the skull and the rear caudal (tail) vertebrae, are missing, making this far from a complete skeleton. Therefore, even though the researchers further postulate it had an undulating tail that aided its movement in the water; this hypothesis is also tentative. 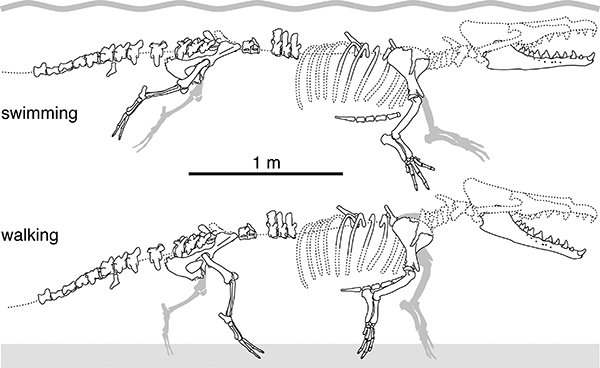 One of the earmarks (pardon the pun) of supposed ancestral whale identification is pinpointing a sigmoid process on the auditory bulla (a crest on the tympanic bone—the posterior portion of the skull that encloses parts of the middle and inner ear). Since that portion of the skull was not found, the researchers have proposed that it is a whale because it looked like other protocetids. If the evolutionists were honest with themselves, they would realize that they state Peregocetus looks like a walking whale because it has some physical characteristics with other terrestrial animals which they had previously identified as “walking whales” based on scanty fossil evidence.6 None of the above animals are whales or whale ancestors. They are all either terrestrial animals (like Pakicetus) or at most semiaquatic, like Rodhocetus and Maiacetus.

In addition to the label of protocetid, the authors of the paper have also speculated on a migratory route from Asia to Africa to South America and North America for Peregocetus. Even allowing for the researchers’ contention that the distance between Africa and South America was half that of what it is today (due to subsequent tectonic movement) the global expansion of an animal they speculate was basically a huge sea otter seems far-fetched. Today’s marine otters live in either Alaska/British Columbia or California and don’t seem inclined to venture hundreds or thousands of miles over the open ocean. Why would a coastal semi-aquatic mammal (about the size of a large walrus) suddenly decide to migrate such great distances? We also must remember that this is a single (and partial) skeleton of one animal. That tells us nothing about where it lived or where it migrated from. What it tells us is where it was buried.

Since the sigmoid process is missing in this fragmented fossil, evolutionists used a phylogenetic tree in an attempt to determine the ancestry of Peregocetus. Cladistics is an application of statistics to characteristics of organisms in an attempt to deduce common ancestry. In this study, cladistics placed Peregocetus towards the base of the whale family tree. The problem with this is a complete lack of observable evidence for this animal losing its legs, or even adapting to a fully aquatic lifestyle. Statistical analysis cannot change observational evidence. Instead, they merely are representations of how scientists interpret the evidence.

From a creation perspective, this is a post-flood mammal, possibly semi-aquatic, but also perhaps not. The web-foot interpretation is based solely on speculation, and there are other animals with similar morphologies which are completely terrestrial. As mentioned above, it is possible that this animal is more closely related to terrestrial mesonychids. Or it could be related to larger megafauna which went extinct at the end of the ice age. But whatever the case, it is an air-breathing (at least) partial land-dwelling animal, the original created kind of which would have been created on day 6, one day after the whales were created on day 5 of creation week.

As has been mentioned elsewhere, another drastic change which is completely overlooked in the secular literature is that the newest paradigm on whale evolution points to an evolutionary lineage with artiodactyls (even-toed ungulates), the clear majority of which are herbivores. The only omnivores (pigs and peccaries) are considered the furthest removed from whale ancestry.

Despite all the hoopla, we don’t have a walking whale here.

In addition to having to account for drastic morphological differences between medium-sized land animals to large marine ones, we are left with the added problem of why a primarily herbivorous group of animals would venture to the water in order to eat fish (or other aquatic animals), and why all of the subsequent descendants would be obligate carnivores. Indeed, the hypothesized closest living relatives after hippos are the ruminants, all of which have specialized stomachs for digesting plant matter. It’s incredible that evolutionary biologists will look at the most minute morphological details to force an animal into their evolutionary lineage box yet can ignore an entire digestive system when it is too inconvenient to their paradigm. Despite all the hoopla, we don’t have a walking whale here. What we have is a terrestrial or semi-aquatic mammal that has gone extinct probably during or at the end of the ice age.