Will the Real Unicorn Please Stand Up?

Recent publicity about the Ark Encounter project has unleashed a good deal of ridicule claiming that the ark will feature fanciful unicorns. But the unicorns mentioned in the Bible—not only in English King James Version but also in other languages—are not the fairy tale creatures many people think of nowadays, but real creatures familiar to the people living in those ancient times.

So what kind of creature was the Bible talking about? If there really was a historical unicorn, when did the word start referring to a creature of fantasy? And why did Bible translators use a word that could dredge up fantasy images in documents intended to reflect genuine history?

If God had used an imaginary creature to make His point, Job would have learned nothing.

The biblical unicorn was a real animal, not an imaginary horse-like creature. The nine Old Testament verses1 which refer to unicorns do so in the context of familiar animals—peacocks and eagles, lambs and lions, bullocks and goats, donkeys and horses, dogs and calves. Furthermore, the biblical unicorns also behave like ordinary animals—skipping like calves (Psalm 29:6) and bleeding when they die (Isaiah 34:7). God reminded Job of the characteristics of a variety of impressive animals He had created, showing Job that God was far above man in power, strength, and understanding. Speaking of the unicorn, God told Job that the unicorn had great strength but could not be tamed for agricultural labor (Job 39:9–12). If God had used an imaginary creature to make His point, Job would have learned nothing.

The notion of a single-horned creature should not trouble us. Consider the modern Indian rhinoceros and narwhal. In fact, Webster’s 1828 Dictionary (the very first edition) there is no mention of an imaginary animal or horse-like animal in its definition of unicorn. Instead, the word is defined as follows: 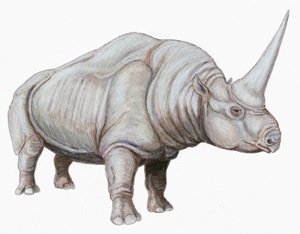 The biblical unicorn is consistently used as a symbol of strength, so we would expect it to be a powerful creature. The translators of the King James Version suggested this powerful creature could be a rhinoceros. They included a margin note by the unicorns of Isaiah 34:7 stating, “or rhinocerots.”

A possible candidate for the historical unicorn is the elasmotherium, an extinct giant rhinoceros, which may well be the single-horned creature depicted on an obelisk found at Nineveh in the company of two-horned bovine creatures. Both fossil evidence and archaeological reports by the respected Austen Henry Layard support this option.2

Marco Polo’s description of unicorns in Sumatra sounds like a rhinoceros:

They have wild elephants and plenty of unicorns, which are scarcely smaller than elephants. They have the hair of a buffalo and feet like an elephant’s. They have a single large black horn in the middle of the forehead . . . They are very ugly brutes to look at. They are not at all such as we describe them when we relate that they let themselves be captured by virgins, but clean contrary to our notions.3

Accounts of a real single-horned creature abound in ancient writings dealing with natural history. The earliest surviving record comes to us from the fourth century Greek physician/historian Ctesias. John Gill, an 18th century Hebrew scholar, agreeing that the biblical unicorn must be a real creature, in his commentary cites several ancient writers who described such an animal, which was, like the unicorn described in Job, not able to be domesticated. Ancient writers who described a realistic unicorn include Aelian, Strabo, Pliny the Elder, and Tertullian.

Because the Hebrew word re’em, translated unicorn in the KJV and wild ox in some other English translations, bears some similarity to the Assyrian word for wild ox, rimu, many have assumed the unicorn to be the two-horned aurochs. Julius Caesar described the phenomenal size, shape, and unique appearance of this powerful creature’s horns. The aurochs, extinct since 1627, had horns so symmetrical they could appear as one in profile. Assyrian obelisks and Indus River seals do depict apparent single-horned creatures, but some people interpret these as artistic symmetry. If an animal commonly known to have two impressive symmetrical horns were to be commonly known as a unicorn, there would be nothing deceptive or fanciful about referring to the animal by its common name.4

Nevertheless, there is ample support for the possibility that the creature in view here really did have just one horn (see “Linguistic Justification,” below).

The incorporation of unicorns into fanciful legends, including unfortunately some with religious significance, paralleled the more realistic historical accounts of the unicorn. The fanciful unicorn is found in ancient Chinese creation mythology. The powerful beast which only gentle maidens can tame enters western literature in an anonymous work called the Physiologus. These writings are thought to have originated in North Africa around the second to fourth century AD. They include an allegory intertwining the biblical Incarnation of Christ and the Virgin Mary with a unicorn which cradles its head in Mary’s lap. (Those familiar with the history of the Christian church will note that the appearance of this allegory both temporally and geographically parallels the rise of the allegorical hermeneutic and a variety of heresies in the Christian church.) Thus, the unicorn not only entered religious art but also became the stuff of fairy tales. For instance, a popular German tale in the 16th century involves a unicorn rescuing a girl accused of witchcraft, and the unicorn can be seen in the religious artwork of the time. Many European countries had similar tales.

So Why Did They Use a Word Like That Anyway?

Since the King James translators surely knew of the fanciful unicorn tales as well as the iconic place the unicorn had assumed in religious artwork for centuries, why did they choose that word? Well, we need to remember that they also knew of the prominence of the unicorn in natural history.

Translators knew that honest intelligent readers of God’s Word would understand from context that the unicorn they wrote of was the real version of the animal.

By way of analogy, our literature abounds with information about both real rabbits and the Easter bunny, yet we never fear that when we write about real rabbits someone will think we are writing about an imaginary creature. We know from context whether our rabbits are real or made-up, and no serious Christian would think the Easter bunny had anything to do with our faith (“empty egg analogies” notwithstanding). Likewise, the King James translators knew that honest intelligent readers of God’s Word would understand from context that the unicorn they wrote of was the real version of the animal.

The translators of the King James Version and of Bibles in other European languages had access not only to the Hebrew Old Testament but also to other translations and to the scholarly works of Hebrew rabbis. In consulting the Latin Vulgate and the Septuagint—a Greek translation of the Hebrew texts—they would have seen the Hebrew word in question translated as a one-horned animal. For example, in Deuteronomy 33:17, the Latin Vulgate uses the word rinocerotis (rhinoceros) and the Septuagint uses monokerōtos (lit. “one horn”) for the word translated as unicorns in the KJV. The Dutch Bible (published soon after the King James), the Spanish Bible, Italian Bible, Luther’s German Bible (all of which predated the 1611 English version), and the earlier English Bibles (Wycliffe’s, Tyndale’s, Coverdale’s, Bishop’s, and Geneva) all reflected the “single-horned” understanding of the word.

Furthermore, and most importantly, the Hebrew itself guided the translators’ choices. From Tyndale forward, Protestant translators had knowledge of Hebrew and access to the Hebrew Old Testament, so they did not need to rely on the Vulgate or the Septuagint. They increasingly also had access to Hebrew lexicographers. The Geneva Bible (1560) translators were able to complete the Old Testament translation directly from the Hebrew. The Geneva Bible translators, like Luther (Luther’s German Bible–1534), relied heavily on Rabbi Kimchi’s Hebrew grammar. By the time the King James team gathered, additional Hebrew commentaries by Rashi and Ibn Ezra were available. Thus, although some claim that unicorn (or its equivalent in other European languages) is a corruption carried over from the Greek Septuagint and the Latin Vulgate, English Bible translators had other sources. They were able to consult Jewish Hebrew language experts and to translate directly from the Hebrew.

While many scholars today simply point authoritatively to a modern Hebrew lexicon or Strong’s concordance and announce the unicorn-word (re’em) should be translated “wild ox,” Hebrew experts through the years have not been so unified in that opinion. Many, including the renowned thirteenth century scholar Rabbi David Kimchi, have held to the “single-horned” understanding of the word. It is from the rabbinical experts on Hebrew that the King James scholars (and other translators) got their understanding of this word. In short, they called it a unicorn because that’s what it was. And they trusted the context and good sense of their readers to know it was real.