Ancient Flying Fish Around the Globe

Ancient flying fish flew in far-flung reaches of the globe.

Flying fish fossils found in China’s Middle Triassic rock layers are forcing a slight rethink of the evolutionary picture of recovery after the “Permian mass-extinction.” Evolutionists view the Permian rock graveyard as memorializing a mass extinction from which evolution slowly recovered. 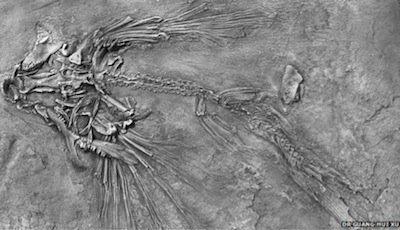 This flying fish Potanichthys xingyiensis discovered in Middle Triassic rock in southwestern China is of the extinct Thoracopteridae family of flying fish otherwise known only from Upper Triassic rock in Austria and Italy. The appearance of these flying fish in such far-flung reaches of the globe so soon after the presumed time of the Permian “mass-extinction” was a bit of a surprise to evolutionists. The discovery is completely consistent however with biblical history. Image credit Dr. Guang Hui Xu through www.bbc.co.uk.

Modern flying fish have a fossil record in Eocene rock, but Thoracopteridae, the extinct variety, have been found deeper, in European Upper Triassic rock. China’s Middle Triassic fish therefore represents the deepest known fossil record of flying fish.1 The discovery of this flying fish so early in the fossil record suggests to evolutionists that worldwide evolution of biodiversity got back on track pretty quickly after the Permian disaster.

Modern flying fish do not “flap” their wing-like fins as birds do. They do not have sufficient pectoral musculature to accomplish such a feat. Instead, they gain speed underwater and then launch themselves using rapid movement of a highly asymmetrical tail fin. (Modern flying fish have a tail fin with a very robust bottom lobe. Therefore, fossilized fish with big “wing-like” pectoral fins but without this tail fin asymmetry are no longer considered flying fish.) Modern flying fish can glide as much as 400 meters (nearly 440 yards) in 30 seconds, so the extinct variety, since it is anatomically similar, probably did the same.2

Evolutionists believe the presence of modern flying fish fossils and the extinct variety in different layers of the fossil record proves that gliding ability “convergently evolved” twice in fish.

Evolutionists believe the presence of modern flying fish fossils and the extinct variety in different layers of the fossil record proves that gliding ability “convergently evolved” twice in fish. Gliding from tree to tree is an efficient way for gliding mammals, lizards, and frogs to travel. However, for a fish, the launch-and-glide maneuver is a costly activity in terms of energy and is not used by modern flying fish, as far as anyone knows, for ordinary migration. The selective advantage likely conferred instead was the chance to escape from predators. Modern flying fish are common dolphin dinner, so similar predators likely stalked Thoracopteridae, their Triassic “non-cousins.” The presence of a fish with this gliding adaptation so deep in Triassic rock, to evolutionists, suggests there had to be sophisticated marine predators around to drive the evolutionary process. The obvious conclusion, then, is that the post-Permian evolutionary recovery was quicker than previously thought.

But could there be another interpretation? “Mass extinctions” are levels in the fossil record believed by evolutionists to represent the simultaneous extinction of many sorts of organisms. However, the geology expected from the global Flood—with catastrophic deposition of sediment containing organisms swept together from various ecosystems—explains many layers of fossils. Thus much of the fossil record represents the order of burial associated with the global Flood and subsequent localized post-Flood catastrophes. The “mass extinctions” are indeed a timeline, but not one lasting millions of years.3

God created fish on the 5th day of Creation week about 6,000 years ago. They did not evolve from anything else or into anything else. The global Flood occurred around 1,700 years later, so it is not surprising to see flying fish preserved in similar rock layers on opposite parts of the globe. Gliding ability did not have to evolve twice, or even once. The kinds of fish we have today are just varieties of fish descended from the originally created fish. Nothing about this discovery demonstrates evolution of fish from non-fish but is fully consistent with the biblical history of creation and the global Flood.