But does the K-T boundary even represent the mass extinction of dinosaurs?

The most popular idea about what caused dinosaur extinction—presumably marked by the K-T boundary—involves an asteroid impact memorialized by the Chicxulub (pronounced cheek’-she-loob) impact crater off Mexico’s Yucatan Peninsula. The main problem with the idea, from an evolutionary point of view, has been that dinosaur extinction seems to have taken place 300,000 years after the asteroid hit. A study published last week in Science offers a comfortable solution by re-dating the two events to a statistically plausible coincidence.

Paul Renne and colleagues used a high-resolution argon-argon method on material from Haiti (thought to have originated from the crater) and from near the K-T boundary in Montana’s Hell Creek Formation. By then comparing the results and the statistical range of error assigned to each, the dates appear close enough to suggest the events they represent occurred at almost the same time—possibly as close as 11,000 years to one another.

“This study shows the power of high precision geochronology,” says coauthor Darren Mark. “Many people think precision is just about adding another decimal place to a number. But it’s far more exciting than that. It’s more like getting a sharper lens on a camera. It allows us to dissect the geological record at greater resolution and piece together the sequence of Earth history.” 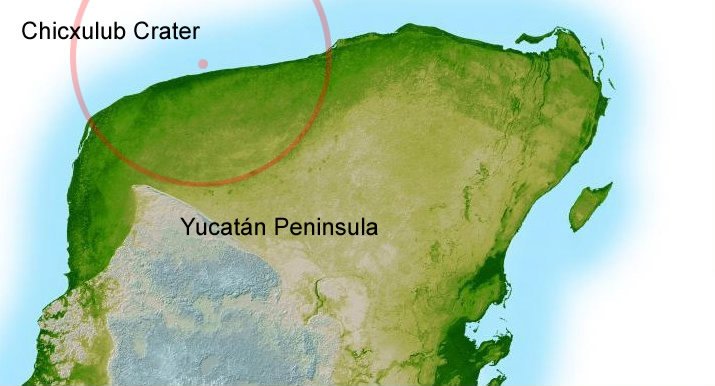 A 110-mile wide impact crater in Mexico records the violent arrival of a large chunk of debris from space at some time in the past. But even the latest dating method assigning it a precise date of 66,038,000 (give or take 11,000) years ago are based on unverifiable assumptions. Image by NASA/JPL-Caltech, modified by David Fuchs, from Wikimedia Commons. 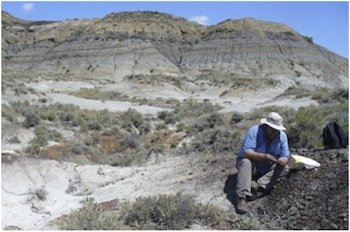 Paul Renne collects volcanic ash from a coal bed near the K-T boundary at Montana’s Hell Creek Formation. Yet even the most precise dating methods are only as good as the known standards against which they are calibrated. With no one around to document the millions-of-year age of his samples, even the “best” dates are built on worldview-based unverifiable assumptions. Image by Courtney Sprain, from Berkeley News.

Of course, even if events coincide in time, one is not necessarily the cause of the other. But this coincidental “precision” was just too great for evolutionary scientists and the makers of headlines worldwide to resist. Case closed: the asteroid was the dinosaur killer.

Actually, even figuring out how the asteroid could have triggered the mass extinction of dinosaurs and many other species has been a matter of much debate with no consensus. These researchers don’t claim the asteroid was the only problem earth’s Cretaceous population faced. Renne suggests a million years of cold snaps triggered by volcanic eruptions in India had already upset earth’s ecosystems.

“The impact was clearly the final straw that pushed Earth past the tipping point,” says Renne. “We have shown that these events are synchronous to within a gnat’s eyebrow, and therefore the impact clearly played a major role in extinctions, but it probably wasn’t just the impact. . . . These precursory phenomena made the global ecosystem much more sensitive to even relatively small triggers, so that what otherwise might have been a fairly minor effect shifted the ecosystem into a new state.”

The idea that an asteroid triggered dinosaur extinction was hatched in the 1980s when Berkeley scientists Luis and Walter Alvarez noticed an unusually high concentration of iridium in rocks near the K-T boundary. Below it, in Cretaceous (“K”) rock, are dinosaur fossils. Above it—past the “K-T” boundary in the “Tertiary” (“T”)1 rocks, there are none. Evolutionary scientists believe the geologic column represents the time various animals evolved and went extinct over millions of years. Because dinosaurs and many other organisms do not appear above the K-T boundary, evolutionary scientists believe the K-T boundary represents one of several “mass extinction” events. 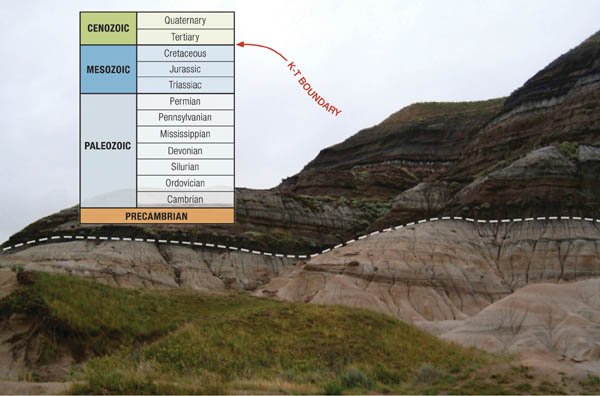 The geologic table is a list of the names of earth’s rock layers. Secular scientists think they were laid down over millions of years, but they have no objective standard on which to base that claim. Biblical history indicates they were laid down in only about 6,000 years. Many of the fossils contained in these layers were buried during the global Flood and associated post-Flood catastrophes. Based on the historical eyewitness account recorded in the Bible, we know that dinosaurs buried in the Cretaceous and other layers of sedimentary rock below this level represent many of those that died in the global Flood less than 4,500 years ago. And while there are billions of dead things buried in these layers, since dinosaurs and other air-breathing animals were preserved on Noah’s Ark, they did not become extinct until later, after the Flood.

Evolutionary scientists did not think the iridium could have originated on earth because they thought that over millions of years iridium would have sunk into a molten earth. Therefore, they looked for a space source, like an asteroid. The “smoking gun” to explain the iridium in the rocks seemed to surface in 1990 with the realization that the massive Chicxulub crater in Mexico appeared to be the result of a huge meteorite impact. Scientists believe that a chunk of space debris—possibly an asteroid or even a comet—could have made the crater, supplied earth with a generous supply of iridium, and caused a large dust cloud to block out the sun’s light for long enough to cause many species to go extinct.

Among other problems with this idea is the fact that there is too much iridium dispersed over the earth to be explained by the asteroid. Though asteroids (and meteorites derived from them) do contain iridium, the areas around impact craters is not generally enriched with iridium. Therefore, it is unlikely that such space-borne iridium would have dispersed over the entire earth. Iridium coughed up by volcanic activity, however, does tend to spread out over the earth’s surface. Thus, the global Flood—which both the Bible and earth’s geology suggest was accompanied by volcanic activity—is a reasonable explanation for the iridium found at the K-T boundary. Read more about it in “Dinosaur Killer.”

But what of the coinciding dates? Even high-resolution recalibrated dating methods must be calibrated against a standard of “known” date. And since no one was around millions of years ago to document the actual age of anything, the age of “known” standards are only guesses based on the same unverifiable assumptions as the material being re-tested. This standard practice of elaborate circular reasoning is of course clearly documented in the journal article and its supplementary materials.2

The argon-argon method, for instance, suffers from the same problems as the potassium-argon method upon which it is supposed to improve. As geologist Dr. Andrew Snelling of Answers in Genesis observes:

The unknown samples have to be calibrated against samples of “known age” placed in the reactor (where potassium is converted to argon) at the same time. And how is the “known age” of the monitor samples determined? Usually by the potassium-argon method, or even sometimes by the argon-argon method! And sometimes the U-Pb method is also used. In other words, there is no objective absolute standard of the truly known real age of such calibrations. And thus the argon-argon method is just as flawed as the potassium-argon method. Furthermore, it is destined to give the required answers because it has been calibrated against itself!! Moreover, the very precise dates Renne reports come from statistical treatment of the age spreads obtained from repeated analyses of the same samples. Those “ranges of error” are based only on assumptions about the true ages of the monitor samples (or standards), but by what objective standard can anyone be sure those are the true ages?

No amount of precision can make up for the lack of an observable experimental scientific standard.

The researchers thus achieved an illusory “precision,” but not greater accuracy. No amount of precision can make up for the lack of an observable experimental scientific standard.

Does the K-T boundary even represent the mass extinction of dinosaurs? No. The geologic column is not a record of the evolution of life. The millions of years assigned to it are based on unverifiable assumptions with the ultimate goal of providing sufficient time for evolution to happen. But even infinite time cannot supply the genetic information for life to evolve through natural processes.

Much of the fossil record instead is a relative timeline of the order in which organisms were catastrophically buried during the year of Noah’s Flood. The dinosaurs and many other animals seem to disappear above the K-T boundary because the Flood and its aftermath dumped additional sediment on top of those fossilized dinosaur bearing layers after the places they lived were overwhelmed and buried.

Does that mean they became extinct after the Flood? No. God instructed Noah to take with him at least two of every kind of air-breathing animal on the Ark, and this would have included dinosaurs. (For an estimate of how many animal kinds were needed, see “Determining the Ark Kinds.”) Later, the same sorts of things that cause animals to become extinct today took their toll on earth’s remaining dinosaurs. Biblical history and the Flood geology model based on it thus provide an eyewitness account of past events that explains what geologists find.

Previous Article Will the New Pope Recognize the Full Authority of God’s Word? Next Article Fossils vs. Clocks: Both Camps Have Flawed Foundation