Give Today
News to Know

Fossils vs. Clocks: Both Camps Have Flawed Foundation

In an effort to settle the evolutionary debate about when the ancestor of most mammals (the placental ones) evolved, Stony Brook University paleontologist Maureen O’Leary and colleagues have published a study packed with anatomical data and a significant bit of whimsy.

The debate—“Fossils Versus Clocks”1 as Science writer Anne Yoder calls it in her editorial commentary—concerns the question of whether the earliest placental mammal evolved before or after the extinction of dinosaurs. O’Leary’s study stacks the deck on the “fossil” side with a mountain of anatomical data that ignores the “clock” side of the question. 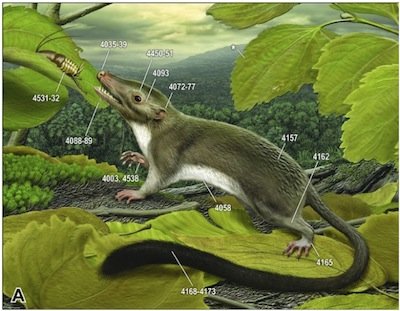 This is the little ancestor that should have evolved soon after the dinosaurs became extinct, according to the latest study in Science. This reconstruction of an insect-eating, tree-climbing, furry-tailed animal around the size of a chipmunk would have had all the ingredients it would take to evolve into all placental mammals to have ever existed, researchers claim. The problem is, however, that the evolution they imagine never actually happened. Image credit: M. O’Leary et al., Science 339 (8 February 2013):662–667 DOI: 10.1126/science.1229237 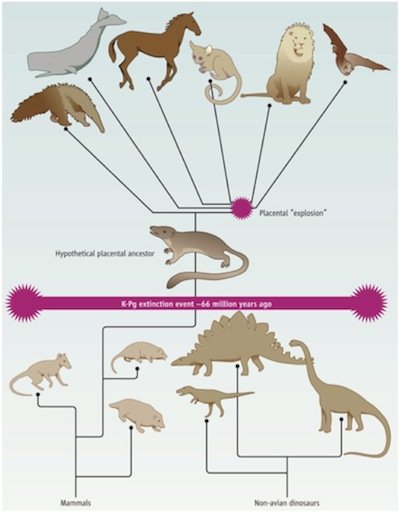 This illustration shows the “classical” version of the evolutionary story of mammals. In this scenario, the mammals that co-existed with dinosaurs were not the ones that evolved into placental mammals. At odds with molecular clock calculations that indicate at least 36 million more years would have been needed to produce placental mammals than the classical scenario allows is an anatomical analysis just published in Science. According to this study, the “hypothetical placental ancestor” didn't evolve until after dinosaurs became extinct. The study describes in detail what the authors think it would have looked like. Image credit: A. Yoder, “Fossils Versus Clocks,” Science 339 (8 February 2013):656–658. DOI: 10.1126/science.1233999

O’Leary not only tells us when the ancestral placental mammal must have lived, but what it must have looked like. A closer look at the study with consideration of the assumptions on which it is based shows this is imaginative evolutionary forensics at its best. Unfortunately, the New York Times gave this study the importance of being a front-page, above-the-fold article, leaving the reader with an impression that some missing link has been found.

The fossil record reveals that some vertebrate mammals co-existed with dinosaurs.2 However, given the absence of transitional forms, evolutionists have been uncertain whether these were bona fide ancestors of today’s ~5100 placental mammal species or just evolutionary dead ends. O’Leary’s team used a database containing 4,541 anatomical characteristics of 86 extinct and living species to construct a mammalian tree of life. In this way, the missing transitional forms could just be assumed to have existed in an elaborate game of connect the dots.

By comparing the tree of mammalian life to the fossil record, O’Leary’s team determined the oldest legitimate ancestral placental was Protungulatum donnae. Protungulatum is a fossil found near the Cretaceous-Paleocene boundary. It is thought to have evolved very soon after the asteroidal catastrophe on which many evolutionists conventionally blame the extinction of dinosaurs and many other species. Protungulatum, however, is not the animal O’Leary believes started the whole placental explosion nor even an ancestor of the primate/human branch.3 That honor goes to a reconstructed composite.

The fossil record not only lacks the transitional forms needed to complete the evolutionary picture, it lacks the little placental animal that presumably started it all.

The fossil record not only lacks the transitional forms needed to complete the evolutionary picture, it lacks the little placental animal that presumably started it all. In the tradition of the 1966 television Grinch, who said, “If I can’t find a reindeer, I’ll make one instead,”4 O’Leary’s team did just that. They “reconstructed the hypothetical placental ancestor”5 based on which traits the various branches on the tree must have shared to ultimately contribute to an explosion of mammalian biodiversity.

As PBS.org notes, the study described this hypothetical ancestor in “breathtaking detail.”6

The artist’s rendition of the furry insectivore is conveniently labeled with numbers designating which of the 4,541 traits produced its parts. Its anatomy is laid out in the Science study down to the position of its facial nerve as it exits the brain.7

Of course, neither placentas nor pouches nor the soft tissues of the reproductive system fossilize (much less the facial nerve). Paleontologists note that modern egg-laying mammals and marsupials, which have a rudimentary placenta, differ from true placental mammals in their number of molar teeth. Using 4,541 anatomical characteristics, the team booted several mammals that appear below the Cretaceous-Paleocene boundary in the fossil record from the placental ancestral line. They calculate their “hypothetical placental ancestor” evolved just after the Cretaceous-Paleocene boundary.

Molecular clock proponents calculate, however, that the oldest placental ancestor must have been on the scene at least 36 million years sooner than O’Leary’s team calculates. O’Leary’s study did not base any of their work on molecular clocks.

So who’s right? The rock people or the clock crowd? We would submit that both camps base their conclusions on unverifiable presuppositions.

So who’s right? The rock people or the clock crowd? We would submit that both camps base their conclusions on unverifiable presuppositions. And neither side has heard testimony from the most important witness of all.

The two camps in this debate differ according to which set of assumptions they accept. As a result, they differ in their conclusions about when placental mammals evolved. Yet they have much in common. Both groups believe in molecules-to-man evolution. Both believe that complex kinds of animals evolved from simpler ones. Both believe that random natural processes caused life to spring into being, caused genetic information to pop up without a living source of information, and caused new genetic information to allow for upward evolution of new kinds of organisms to appear through mutation of existing information. None of this has experimental scientific support. Observational biology confirms that living things do not emerge from nonliving elements through random processes. Observational biology confirms that living things vary within their kinds but reproduce after their kinds.

Evolutionists like O’Leary believe missing transitional forms—fossils of evolving creatures not preserved or not yet found—can be supplied by this method. In reality, however, many missing fossils represent impassable boundaries between distinct kinds of creatures. The evolutionary transitional forms supposed to belong in those gaps never existed. These gaps are consistent with the biblical record of Creation in that God created various kinds of creatures to reproduce after their kinds, not to evolve from one kind into another. Their order in the fossil record is due to how they were buried during the global Flood recorded in Genesis. Thus information from God’s Word reveals the true nature of gaps in the fossil record. Furthermore, there was no ancestral mammal. God created all kinds of animals about 6,000 years ago, and variations within their kinds have produced the biodiversity we see today.