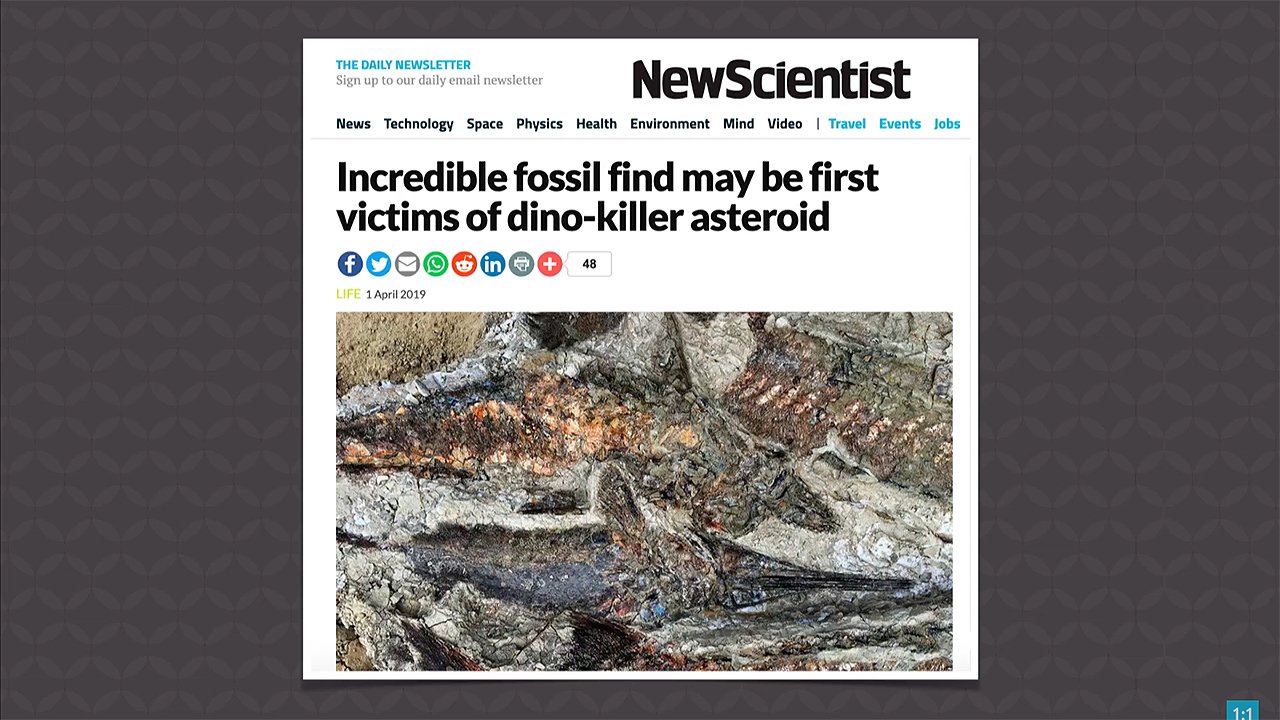 The news has been buzzing recently with headlines such as this one from New Scientist, “Incredible fossil find may be first victims of dino-killer asteroid.” These headlines are announcing the discovery and analysis of a fossil deposit in America that is interpreted as “an unprecedented record of the mass extinction event that wiped out most of the dinosaurs 66 million years ago.”

The article about this North Dakota find goes on to state, “The fossils appear to be animals that were killed within minutes of an asteroid striking Earth, in a flood triggered by the shattering impact.” The asteroid impact mentioned is, of course, the impact at the Chicxulub crater on the Yucatán Peninsula in Mexico, thousands of miles from North Dakota. Many (though not all) scientists believe this event led to the extinction of the dinosaurs. (Well, sort of, in an evolutionary view. As this article put it, “Contrary to popular belief, it didn’t obliterate the dinosaurs: birds are a kind of dinosaur, and they are still around. However, no non-avian dinosaurs survived.”)

Such an impact would’ve caused earthquakes and flooding, and this site, in the evolutionary interpretation, appears to preserve part of that catastrophe, as a flash flood of fossils and tiny pieces of natural glass (called tektites) formed from meteorite impacts are also found.

How should we understand this event in a biblical worldview?

Now, how should we understand this event in a biblical worldview? First, it’s important to understand that everyone interprets the evidence through a worldview. Scientists gather the data and then interpret that information regarding the past in light of their worldview. The scientists behind the paper interpret this find within the framework of millions of years of evolution and the asteroid catastrophe.

Creation scientists look at the same evidence and interpret it a different way. The Chicxulub crater was formed when an asteroid impacted the earth during the global flood of Noah’s day, just 4,350 years ago. It didn’t lead to the demise of the dinosaurs. (Two of each land animal kinds, seven pairs of some, including those kinds called dinosaurs, were safe on the ark, but those outside the massive ship were drowned and buried by floodwaters.) The asteroid did, however, contribute to the violent reshaping of the earth’s surface (2 Peter 3:6).

The secular scientists observing this fossil formation in North Dakota are recognizing elements of catastrophe and rapid burial.

Now, the secular scientists observing this fossil formation in North Dakota are recognizing elements of catastrophe and rapid burial (e.g., freshwater and marine creatures buried together, fossils extending through more than one rock layer [known as polystrate fossils], fish aligned vertically, etc.). But these same features are found in other fossil beds around the world. And yet these same scientists refuse to recognize there was a global catastrophe that buried fossils rapidly and catastrophically all around the world. The problem isn’t the evidence—the rocks literally cry out with evidence of a watery global catastrophe. The real problem is their hardened hearts that don’t want to bow in submission to the truth of God’s Word and the gospel of Jesus Christ.

Dr. Andrew Snelling, the director of research for Answers in Genesis and a geologist, gave this analysis of this fossil find:

There is absolutely no doubt that the reported field observations are a stunning confirmation of what occurred at this level in the geologic record during the global Flood cataclysm, as described in Genesis 7–8. The Chicxulub impact was the result of one of many asteroids and meteorites impacting the earth’s surface and cratering it during the Flood, adding to the violent reshaping of the earth’s surface by catastrophic erosion by water surging from earthquake-generated tsunamis and waves, followed by the incredibly rapid deposition of sediments entombing creatures and plants.

The authors even admit the observation that some of the fish fossils are found obliquely aligned vertically through many of the enclosing laminated sediment layers is only compatible with a virtually instant burial of the large fish. Such correct logic should then also be applied by evolutionary geologists to the many other polystrate fossils found throughout the rock record. Including finds such us the many large upright tree stumps and trunks penetrating many hundreds of feet of sediment layers, for example at Joggins, Nova Scotia, Canada, and similarly associated with many coal beds around the globe, all of which are similarly testimony to the very rapid deposition of all those sediments that entombed those fossils during the Flood.

These scientists make very good inferences from the field and laboratory data they collected about the “event” layer being rapidly deposited within minutes to an hour or so. This due to the ground motion from the huge powerful earthquake emanating from the Chicxulub impact, at the same time as the glass spherules ballistically scattered by that impact rained down on this area in North Dakota. And it is hardly surprising that under those catastrophic conditions the rapidly accumulating sediments entombed a somewhat chaotic mixture of freshwater fish, land plants and marine creatures such as ammonites, although somewhat aligned due to the strong water currents. These are conditions and outcomes one would expect during the global Flood cataclysm. Yet this “event” layer pales when one observes the “waves” produced by earthquakes in sand beds in the dinosaur-fossil-bearing Lance Formation in Wyoming, which is the lateral equivalent to the Hell Creek Formation on which this “event” layer rests. Some of those seismites (“waves”) are 30 feet high from trough to crest, so large they had to have resulted from humungous earthquakes, the likes of which have not been experienced since the Flood (see “When Continents Collide”).

Thus, the demise of dinosaurs and so many other land creatures and plants buried with copious marine creatures on the continents. They were buried by ocean waters flooding over them under such catastrophic conditions associated with impact cratering and huge violent earthquakes as described by these scientists, is yet again overwhelming testimony to the literal historic year-long Flood cataclysm described in God’s Word.

Dr. Gabriela Haynes, a paleontologist from Brazil and new member of Answers in Genesis’ research team, said this of the find:

It is very interesting to see researchers finding and admitting the pieces of evidence of a global event that caused a mass extinction. Despite the disagreement between creation and secular scientist about when that happened, the two agree that there was a moment in the history of the Earth that a worldwide collapse took place. As creationists, we understand that it was Noah’s Flood that caused that. The result of the impact of this meteorite recorded in the Tanis deposit can be associated with the Flood. God could have used natural ways to impact the Earth. He is the Creator God and Lord over his creation. He used the wind to open the Red Sea (Exodus 14:15-31), and he also commanded the wind to cease (Mark 4:35-41).

This deposit also preserved a sediment package that was rapidly and turbulently deposited with a mixture of marine and continental biota which can imply a sudden onshore inundation surge. Also, the fossil record found in the Tanis site supports a quick deposition of sediment which caused the rapid burial of the organisms present in that area. All those data fit with what it is expected in a catastrophic event and confirms the biblical account of the global flood of Genesis, since that this area is not the only one that has the characteristic of rapid and turbulent deposition with very well-preserved fossils. That feature is present in many deposits around the world.

The abundant evidence of a catastrophe should remind people,

There was a real global judgment on sin during the time of Noah. And there’s a real coming judgment on sin when Christ returns. The history in the Bible is true; therefore we can trust that its warnings of future judgment are also true. And we can trust that just as Noah and his family were saved by going through the one door of the ark so we can be saved by going through our one Door (John 10:7), the Lord Jesus Christ—our Ark of salvation.

If you confess with your mouth that Jesus is Lord and believe in your heart that God raised him from the dead, you will be saved. (Romans 10:9)

This item discussed this item today on Answers News with cohosts Avery Foley, Dr. Gabriela Haynes, and Bodie Hodge. Answers News is our twice-weekly news program filmed live before a studio audience here at the Creation Museum and broadcast on my Facebook page and the Answers in Genesis Facebook page. We also covered the following topics:

Watch the entire episode of Answers News for April 8, 2019.