The world is full of mysteries that challenge our understanding. Fossils are one good example. In seeking answers, we have a choice. We can begin with God’s Word, or we can begin with human opinion that rejects God’s Word. Our starting point makes all the difference in the world.

Do you remember the first time you, as a young child, saw something so completely unexpected, so amazing or surprising, that you had to ask, “Why?”

A preschooler may be satisfied with simple answers: “Why is the sky blue?” “Because God made it that way.” By the time we hit adolescence, however, preschool-level answers no longer satisfy. We want to know more. We want to see how all the pieces fit together.

But God intentionally raises difficult questions. In fact, near the end of Job’s grueling trial God asks a string of unanswerable questions. Why?

God doesn’t raise questions simply to frustrate us. He wants us to place our complete devotion and trust in Him “who does great things, and unsearchable, marvelous things without number” (Job 5:9; see Romans 11:33–36).

As Solomon explained, “It is the glory of God to conceal a thing: but the honor of kings is to search out a matter” (Proverbs 25:2). God wants us to find wisdom and understanding, but sometimes we must dig to get to it.

When we build our worldview on God’s Word, any new discovery can serve as a stepping stone to greater understanding of God and his world.

The Creator stands ready to unlock a treasure house of insights into His glorious person and work. But the key is God’s Word. If we trust His Word and build our worldview on it, any new discovery can be a stepping stone to greater understanding. But if we distrust His Word, those same discoveries become stumbling stones.

One modern example of a great discovery that can be either a stumbling stone or a stepping stone is fossils.

In our quest for answers, we face a seemingly insurmountable obstacle. We are finite beings, with a limited perspective and a brief lifespan. To make matters worse, our minds are clouded by sin (Ephesians 4:18).

We have only two options. We can turn to other weak, fallible humans, or we can acknowledge our helplessness and turn to the eternal, infallible God, who knows everything and has revealed the most significant events in history, along with the purpose behind all things.

God gave us our minds because He wants us to think and act rationally. But He designed the world in such a way that we need to trust Him first before we can correctly understand it. No mere human can be everywhere and know everything. So we cannot, on our own authority, have confidence in any of our most basic assumptions.

Simply by trusting the Word of the all-knowing God, we can have more understanding than even the wisest men (Psalm 119:99–100).

Origin of Creatures. Suppose we want to know when fossilized creatures, such as Archaeopteryx and triceratops, first appeared on earth. God’s Word gives us the framework for finding the answers.

A young child has no problem believing God’s Word and following such simple logic. Yet when we think this way as adults, our peers often mock our childlike faith. But who is really being irrational? To trust God and build our thinking on His Word is infinitely rational.

Burial and Fossilization of Creatures. The Bible gives us the framework for understanding other important questions about fossils, including how and when they were formed. One event, more than any other, produced the right conditions for the burial and preservation of fossils: Noah’s Flood. According to Genesis 7:21, a one-time global Flood destroyed every air-breathing land animal and bird on earth, except for those on the Ark. The Flood started when “the fountains of the great deep were broken up” (Genesis 7:11) and eventually buried the whole world, so that it “perished” (2 Peter 3:6).

Based on this starting point, we can make several logical deductions. The waters must have eroded away the earth’s surface and redeposited the sediments in layers all over the earth, burying untold billions of creatures. We would also expect these creatures to be buried in a sequential pattern, beginning with sea creatures and ending with land animals (see “Order in the Fossil Record,” Answers, January–March 2010).

The Flood was a defining moment in earth history. So one of the most basic questions to ask about any fossils is whether they were buried before, during, or after the Flood.

Relationship of Fossilized Creatures to Living Species. The Bible also gives us the framework for relating living species to fossils. After the Flood, God promised never again to cover the whole earth with water. So we can make several deductions. The topmost fossil layers contain the creatures that died after the Flood, and these post-Flood deposits must be regional or local in extent, not worldwide. Furthermore, all the living species of birds and air-breathing land animals (and the fossils found in post-Flood rock layers) must have descended from the few survivors on the Ark.

No matter how plausible any other explanation might seem, it cannot be true if it contradicts God’s Word. So any explanation that includes slow processes over millions of years or evolution from a common ancestor leads down a blind alley. Those who trust God’s Word, in contrast, can climb to greater and greater understanding of God’s world.

Putting It All Together

Solomon wrote that God has set “eternity” in our hearts so that “no one can find out the work that God does from the beginning to the end” (Ecclesiastes 3:11). God’s work throughout history is so amazing and complex that we can only begin to answer our infinite questions before life is over.

Yet Solomon said it is still the honor of kings to “search out a matter.” In his life, he “spoke of trees, . . . of animals, of birds, of creeping things, and of fish” (1 Kings 4:33). Nevertheless, he wearied himself in study without coming to full understanding (Ecclesiastes 12:12).

We see something similar happening today, as tens of thousands of brilliant researchers are gathering more and more details about the world. They just keep piling up information. But without a biblical context, this information is essentially meaningless. By ignoring God’s Word they are “always learning and never able to come to the knowledge of the truth” (2 Timothy 3:7).

“Secular scientists attempt to build models of the past world based on the very fragmentary fossil evidence we have in the present. Creation scientists also build such models, attempting to be faithful to God’s Word, which is the ultimate authority. All models are subject to change. Only God’s Word is absolute. So current creationist models are always presented as tentative, and should be viewed as such.”

—Andrew Snelling, director of research at Answers in Genesis

The first step toward understanding is the same as always: “The fear of the Lord is the beginning of knowledge” (Proverbs 1:7). This is the foundation of real knowledge, whether you are a child or the wisest man who ever lived.

Humbly accepting the Bible as their starting point, modern creationists are striving to develop a set of models that help us better understand God’s world. These models, even in their infancy, explain an enormous number of observations from diverse fields. They have proven so successful because they are built on the right foundation.

Their ultimate goal is to glorify the Creator, who encourages us to “search out” the truth about His world, starting with His infallible Word.

Below are three famous fossils. In each case, we can see how a biblical worldview gives us the tools to understand each new find, without appealing to explanations that contradict God’s Word.

Since its discovery in 1860, Archaeopteryx has fascinated scientists. It had wings and feathers like modern birds but also teeth and a long bony tail. Its fossils were found in the same rock layers as dinosaurs. Was it a bird? 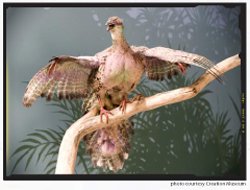 Fossils of “Lucy” (an Australopithecus afarensis specimen) were discovered in Africa in 1974. Comparing these fossils to the bones of living apes and humans, the discoverers suggested that this extinct creature walked upright. Was it an extinct ape or a missing link between apes and humans? 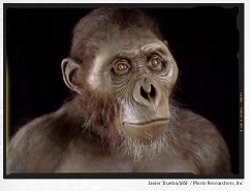 The fossils of a strange-looking “lobe-finned” fish, called Tiktaalik, were discovered in Canada in 2004. Even more than the famous coelacanth (a “living fossil” known to be in the fossil record yet discovered alive in 1938), this extinct fish had unusual features that its discoverers said would help it to “walk.” Is it just a fish or something more? 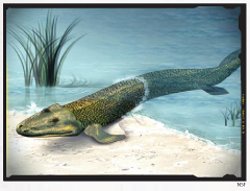 Browse Issue Subscribe
Mike Matthews earned a BA in English and an MEd in English education from Bob Jones University. Mike was the content manager for the Creation Museum and now is the editor-in-chief for Answers magazine.