Radiometric dating measures the decay of radioactive atoms to determine the age of a rock sample. It is founded on unprovable assumptions such as 1) there has been no contamination and 2) the decay rate has remained constant. By dating rocks of known ages which give highly inflated ages, geologists have shown this method can’t give reliable absolute ages.

God’s word unmistakably teaches a young earth and universe (“the heavens”). God has ensured the accurate recording and preservation of His eyewitness account of the earth’s history, which Jesus Christ endorsed repeatedly during His earthly ministry.

God took great care to include the necessary chronological details of the universe’s creation in six literal days, as well as the unbroken genealogies of mankind from Adam to Jesus. So we have absolutely no doubt that the earth is only around six thousand years old.

“Thus the heavens and the earth, and all the host of them, were finished. And on the seventh day God ended His work.” Genesis 2:1-2

Also, we have to be sure that the clock has ticked at the same rate from the beginning until now. No geologists have been observing the radiometric clocks for millions of years to check that the rate of radioactive decay has always been the same as the rate today. To the contrary, we now have impeccable evidence that radioactive decay rates were greatly sped up at some point during the past, for example, during the global catastrophic Genesis Flood.

God is beyond time, which He created. He has told us when He created everything and thus how old the universe is. So we finite humans should fearlessly embrace His testimony of a young earth, recorded in His inerrant Word. 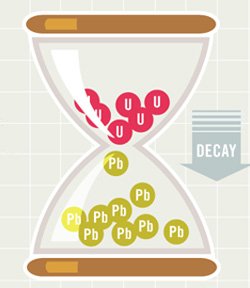 When scientists date rocks, they don’t actually observe the atoms changing. They measure the products of the change, which they assume took place in the past. But what if they are wrong about their assumptions?

Assumption 1: The original number of unstable atoms in rocks isn’t known. Scientists can measure only how many unstable and stable atoms remain in the rocks today.

Assumption 2: Scientists do not know how quickly unstable atoms decayed in the past. So they usually assume the atoms decayed as slowly as they do today.

Dr. Andrew Snelling holds a PhD in geology from the University of Sydney and has worked as a consultant research geologist to organizations in both Australia and America. Author of numerous scientific articles, Dr. Snelling is also director of research at Answers in Genesis–USA.

10 Basics Every Creationist Must Know