Radiometric dating methods sometimes yield conflicting results, but the technique itself is scientific and reliable, and once the results are interpreted in a biblical framework, they yield clear patterns that help us better understand the earth’s history since creation six thousand years ago.

PART 1: Radiometric Dating: Back to Basics

PART 3: Making Sense of the Patterns

This three-part series will help you properly understand radiometric dating, the assumptions that lead to inaccurate dates, and the clues about what really happened in the past.

Part Two of this series showed that the same rocks can yield very different ages, depending on which radiometric dating technique you use. These inconsistent results are due to the problems of inheritance and contamination, which cause the rocks’ chemistry to differ from the assumptions of standard radioactive “clocks.”

Furthermore, new evidence indicates that radioactive elements in the rocks, which are used to date the rocks, decayed at much faster rates during some past event (or events) in the last 6,000 years. So the claimed ages of many millions of years, which are based on today’s slow decay rates, are totally unreliable.

Does this mean we should throw out the radioactive clocks? Surprisingly, they are useful!

The general principles of using radioisotopes to date rocks are sound; it’s just that the assumptions have been wrong and led to exaggerated dates. While the clocks cannot yield absolute dates for rocks, they can provide relative ages that allow us to compare any two rock units and know which one formed first.

They also allow us to compare rock units in different areas of the world to find which ones formed at the same time. Furthermore, if physicists examine why the same rocks yield different dates, they may discover new clues about the unusual behavior of radioactive elements during the past.

With the help of this growing body of information, creation geologists hope to piece together a better understanding of the precise sequence of events in earth’s history, from Creation Week to the Flood and beyond.

Different Dates for the Same Rocks

Usually geologists do not use all four main radioactive clocks to date a rock unit. This is considered an unnecessary waste of time and money. After all, if these clocks really do work, then they should all yield the same age for a given rock unit. Sometimes though, using different parent radioisotopes to date different samples (or minerals) from the same rock unit does yield different ages, hinting that something is amiss.1

Recently, creationist researchers have utilized all four common radioactive clocks to date the same samples from the same rock units.2 Among these were four rock units far down in the Grand Canyon rock sequence (Figure 1), chosen because they are well known and characterized. These were as follows: 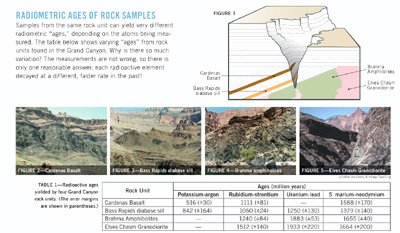 Radiometric Ages of Rock Samples: Figures 1 through 5, and Table 1. Click the picture to view a larger, pdf version.

Table 1 lists the dates obtained from each rock unit. Figure 6 (see below) graphically illustrates the range in the supposed ages of these rock units, obtained by utilizing all four radioactive clocks.

It is immediately apparent that the ages for each rock unit do not agree. Indeed, in the Cardenas Basalt, for example, the samarium-neodymium age is three times the potassium-argon age.

Nevertheless, the ages follow three obvious patterns. Two techniques (potassium-argon age and rubidium-strontium) always yield younger ages than two other techniques (uranium-lead and samarium-neodymium). Furthermore, the potassium-argon ages are always younger than the rubidium-strontium ages. And often the samarium-neodymium ages are younger than the uranium-lead ages.

What then do these patterns mean? All the radioactive clocks in each rock unit should have started “ticking” at the same time, the instant that each rock unit was formed. So how do we explain that they have each recorded different ages?

The answer is simple but profound. Each of the radioactive elements must have decayed at different, faster rates in the past! 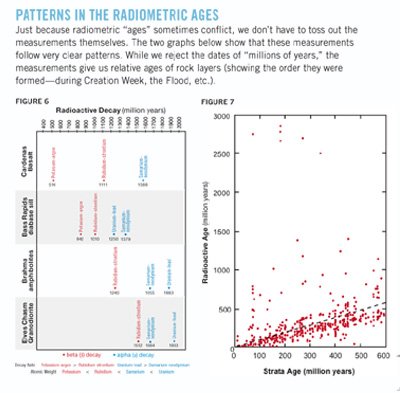 Patterns in the Radiometric Ages: Figures 6 and 7. Click the picture to view a larger, pdf version.

But how could radioactive decay rates have been different in the past? Creationist researchers don’t fully understand yet. However, the observed age patterns provide clues. Potassium and rubidium decay radioactively by the process known as beta (β) decay, whereas uranium and neodymium decay via alpha (α) decay (Figure 6). The former always gives younger ages. We see another pattern within beta decay. Potassium today decays faster than rubidium and always gives younger ages.

Both of these patterns suggest something happened in the past inside the nuclei of these parent atoms to accelerate their decay. The decay rate varied based on the stability or instability of the parent atoms. Research is continuing.

Look again at Figure 1, which is a geologic diagram depicting the rock layers in the walls of the Grand Canyon, along with the rock units deep in the inner gorge along the Colorado River. This diagram shows that the radiometric dating methods accurately show the top rock layer is younger than the layers beneath it.

That’s logical because the sediment making up that layer was deposited on top of, and therefore after, the layers below. So reading this diagram tells us basic information about the time that rock layers and rock units were formed relative to other layers.

Based on the radioactive clocks, we can conclude that these four rock units deep in the gorge (Table 1) are all older in a relative sense than the horizontal sedimentary layers in the Canyon walls. Conventionally the lowermost or oldest of these horizontal sedimentary layers is labeled early to middle Cambrian3 and thus regarded as about 510–520 million years old.4 All the rocks below it are then labeled Precambrian and regarded as older than 542 million years.

So accordingly all four dated rock units (Table 1) are also Precambrian. And apart from the potassium-argon age for the Cardenas Basalt, all the radioactive clocks have correctly shown that these four rock units were formed earlier than Cambrian, so they are pre-Cambrian. (But the passage of time between these Precambrian rock units and the horizontal sedimentary layers above them was a maximum of about 1,700 years—the time between creation and the Flood—not millions of years.)

Similarly, in the relative sense the Brahma amphibolites and Elves Chasm Granodiorite are older (by hours or days) than the Cardenas Basalt and Bass Rapids diabase sill (Figure 1). Once again, the radioactive clocks have correctly shown that those two rock units are older than the rock units above them.

Although it is a mistake to accept radioactive dates of millions of years, the clocks can still be useful to us, in principle, to date the relative sequence of rock formation during earth history.

The different clocks have ticked at different, faster rates in the past, so the standard old ages are certainly not accurate, correct, or absolute. However, because the radioactive clocks in rocks that formed early in earth history have been ticking longer, they should generally yield older radioactive ages than rock layers formed later.

So it is possible that relative radioactive ages of rocks, in addition to mineral contents and other rock features, could be used to compare and correlate similar rocks in other areas to find which ones formed at the same time during the events detailed in Genesis, God’s eyewitness account of earth history.