Cryptozoology is the study of evidence intended to substantiate the existence of unverified animals. It is often regarded as a pseudoscience because it involves searching for “cryptids,” animals that are reported to be living but who have no confirmed existence. Among the long list of cryptids are well-known creatures such as Kraken, Nessie, Champ, Ogopogo, and Bigfoot. Do these creatures really exist? How should Christians understand cryptids within a biblical worldview?

Legends abound among ancient seafarers of a gigantic squid-like sea monster that viciously attacks and sinks ships. Stories of this creature, called the Kraken, seem to have begun in twelfth-century Norway and have inspired famous accounts like those found in 20,000 Leagues Under the Sea and Moby Dick. The oldest stories describe the creature as the size of an island and extremely fierce. As the years passed by, the story got a little tamer and the creature somewhat smaller. Eventually the idea of a massive squid-like creature was completely dismissed, and the scientific community laughed at the thought of such a sea monster.

However, in the mid-nineteenth century dead or dying carcasses of giant squid began to wash up on shores, mostly in Newfoundland, Canada, and New Zealand. As more bodies were discovered, the scientific community’s interest was aroused and study began. Soon, the existence of a giant squid was well accepted. The largest scientifically documented giant squid was a female that, including tentacles, was 45 feet long!

The giant squid is not the largest of these gigantic creatures though. An even larger creature, the colossal squid, swims in the inky depths. While documented colossal squid are not much longer than giant squid, some suspect that they reach much greater lengths but just have not been officially documented yet. This is based on massive beaks (the hard part of a squid through which it feeds) found in the stomachs of sperm whales, huge sucker marks on the heads of sperm whales, and eyewitness accounts. Some go as far as to say that colossal squid of over a hundred feet exist, but there is no scientifically documented evidence of this.1

While the stories of the Kraken are surely greatly exaggerated, they were thought by many scientists in previous decades to be complete fabrications until giant squid were (re)discovered and documented. While there have been no officially documented squid attacks on boats, stories do exist from the last century of boats being attached by giant squid. This has led many to believe that perhaps legendary stories of kraken are based in reality and are simply exaggerated stories of giant or colossal squid attacks.

Perhaps even more famous than the monstrous Kraken is Loch Ness Monster, or “Nessie.” Supposed sightings of this aquatic monster date from the sixth century until the present day, with the bulk of the sightings being reported since “Nessie mania” began in 1933. Loch ness monster (or monsters) is reported to live in the Scottish Highland’s Loch Ness, the largest lake by volume in the United Kingdom. Evidence for this cryptid exists in the form of reported sightings, disputable videos and photos, and mysterious readings from sonar reports. Some devotees claim that Nessie died a few years ago to explain why sightings have declined dramatically and a thorough 2003 sweep of the lake produced no unexplainable phenomena.2 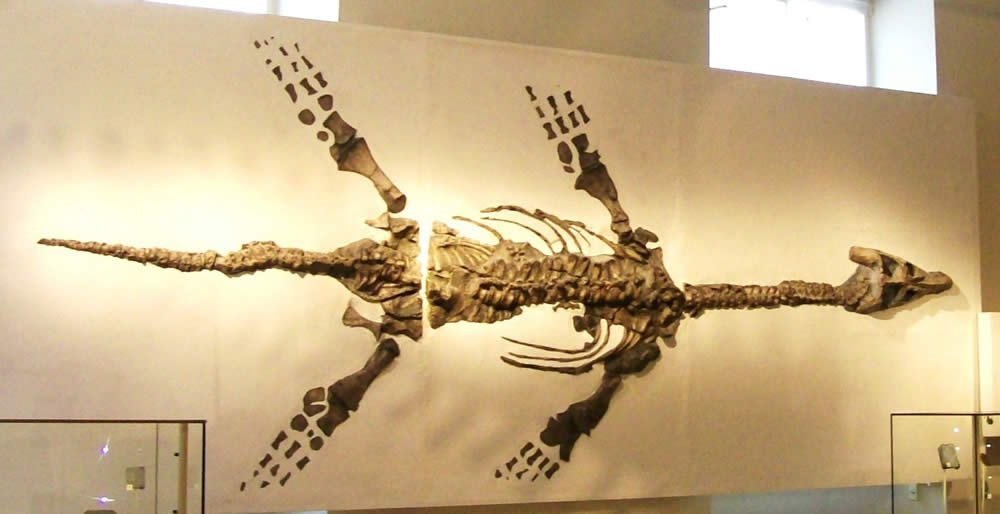 The plesiosaur was a long-necked marine reptile with four paddle-like fins and a tail. Image courtesy of Wikimedia, commons.wikimedia.org/wiki/.

Most Nessie enthusiasts associate the unidentified monster with the plesiosaur (commonly believed to be extinct).

Few in the scientific community accept Nessie’s existence and claim that “evidence” of the monster is the result of misidentification or pure fabrication by fraud or an over-active imagination. Proposed animals that could have resulted in misidentification are massive eels, diving birds, otters, or seals. A grey seal seems the most likely explanation as several “Nessie” sightings have occurred out of the water and grey seals have long, flexible necks and “paddle” fins similar to those described on the monster.3

Though not as well known as Nessie, North America has its own “Loch Ness monster.” Champ, the supposed inhabitant of Lake Champlain, has garnered around 300 recorded sightings. These sightings date back to Native American legends of a great sea creature as well as a diary entry that describes a strange creature Samuel de Champlain’s exploration party saw.4 Evidence for Champ includes eyewitness reports, one famous photograph, one recording of a strange form of echolocation, and one dubious video.5

Like other cryptids, Champ is considered within the scientific community to be no more than the misidentification of normal lake activity. Beavers, otters, diving birds, eels, lake sturgeons, and rotting logs or vegetation have all been suggested as possible explanations. Lake monster enthusiasts claim that, like Nessie, Champ could be a living plesiosaur or maybe a basilosaurus (a serpentine-whale believed to be extinct).6

While the United States and Canada share Champ between them, Canada also has its very own legendary sea monster: Ogopogo. Ogopogo is the supposed inhabitant of Lake Okanagan in Canada’s western-most province, British Columbia. It has been described by witnesses as a 40–50 (even as high as 80) foot long green sea serpent.7 Ogopogo enthusiasts claim that it could be a Basilosaurus, a long, serpent-like whale.

Reported sightings of Ogopogo stretch back to Canada’s First Nations legends that contain stories of a fierce lake monster and continue to the present.8 Scant physical evidence exists in the form of inconclusive photos and videos. The scientific community, like with Nessie and Champ, simply chalks the sightings up to misidentifications of otters or floating logs.9

One of the most famous of the cryptids is North America’s “bigfoot” or “sasquatch.” These creatures are said to be a population of large, hairy, bipedal primates that inhabit the coniferous wilderness of the United States and Canada. They are thought to range in height from 6.6–9.8 feet and weigh over 500 pounds.10 They are reported to be extremely muscular and capable of using their “hands” to twist saplings in two.11 Bigfoots are also believed to be nomadic, active mostly at night, largely solitary, and very shy.

While few in the scientific community give any credit to the existence of giant apes dwelling in North American forests, organizations such as the Bigfoot Field Researchers Organization insist that bigfoot is a real, living creature. This group, run by volunteers, adamantly claims that there is plenty of evidence for bigfoot in the form of hair, stool, footprints, and, of course, sightings.12 They argue that sightings of bigfoot are a historical phenomenon dating from indigenous peoples of North America until present day. These reported sightings are spread across North America with the majority occurring along the western coast.

It is proposed that if bigfoot is indeed a real—though highly elusive—creature, it is a type of ape. This is supported by its reported “human-like” appearance (similar to the way that gorillas look vaguely like humans), gorilla-like sagittal crest (a ridge on top of the skull giving it a domed appearance), and the report that close encounters with a bigfoot are sometimes accompanied by an intense, gagging odor similar to the stench gorillas can emit from their sweat glands. The fossil record supports the existence of a gigantic orangutan-like creature called Gigantopithecus, and many bigfoot enthusiasts claim that this Asian ape is not extinct, just rare and now called “bigfoot.” The only known fossils for Gigantopithecus consist of teeth and jawbones, so the fossil evidence is scant and provides little detail about the creature. All Gigantopithecus fossils are exclusive to Asia, but those who believe the Bigfoot-Giganto Theory say that they migrated from Asia across the Bering Land Bridge (likely this land bridge would have been exposed during the Ice Age that followed the Flood) to inhabit North America.13

Most scientists chalk bigfoot sightings up to misidentifications because of the hype or simply as hoaxes by sensationalists. It does seem highly unlikely that such a large creature could have managed to remain so elusive when so much effort has been spent over the last 50 years trying to prove its existence. But ultimately, if hard, irrevocable evidence of bigfoot were ever produced, would it be a problem for the biblical worldview? Of course not. “Bigfoot”—like any other animal—would just be another example of a unique creature that is well-designed for its environment.

Finding a creature alive today that was previously thought to be extinct is not unusual . . . and . . . is no shock to those who accept the Bible’s account of history.

A Biblical View of Cryptids

Finding a creature alive today that was previously thought to be extinct is not unusual (e.g., the coelacanth) and, while a big surprise for evolutionists, is no shock to those who accept the Bible’s account of history. For example, if conclusive evidence showed that Nessie and Champ were living plesiosaurs, the evolutionary community would be completely astounded because plesiosaurs are said to have gone extinct with the dinosaurs some 65 million years ago. The creationist community, however, would be surprised but not at a loss to explain it as the Bible teaches that plesiosaurs were created on Day 6 of Creation Week just 6,000 years ago and likely died out sometime after the Flood 4,300 years ago. In fact, there is much evidence in various art found around the world that indicates humans interacted with these creatures after the Flood14—an idea completely consistent within a biblical worldview.

Many people think finding a real-life dinosaur—or marine reptile like a plesiosaur15—would put the nail in the coffin of evolution, but this is simply not true. Evolutionists would certainly think it an incredible and unanticipated discovery, but the evolutionary model is so pliable that the model would simply be molded to fit this new evidence. This happened in 1994 when the supposedly 150-million-year-old Wollemi Pine tree was discovered alive and well in Australia. The discovery was likened by the discoverer to finding a living dinosaur (though not quite as sensational) and yet the evolutionary model was simply reshaped to include this new data which defied evolutionary predictions.

While it is unlikely that any of these cryptids are real, it is fun to speculate and imagine what would happen if a giant ape or a serpent-like whale really were discovered alive today. Such a discovery would be a big surprise to the evolutionary community but would not shock creationists. These creatures would simply showcase the glory of God’s creation and the incredible complexity that He has built into everything that He has made.