Evidence of Dinosaurs at Angkor

There are many references in creationist literature to historical evidence of dinosaurs and man living together, such as the petroglyph in Natural Bridges National Monument, Utah, legends and stories of dragons in Europe, and frequent use of the dragon motif by the Chinese.1 But one striking physical and historical evidence in Asia is rarely mentioned: the bas-relief picture of a dinosaur in the ruins of Angkor outside of Siem Reap, Cambodia.

Angkor is a collection of ruins from the ancient Khmer civilization that lived and ruled in Southeast Asia from the end of the ninth century to the end of the twelfth century. The ruins are composed of temples, palaces, libraries, monasteries, and other buildings built by the various kings and rulers of the Khmer people. These ruins now lie in an area designated as the “Angkor Archaeological Park” in the Kingdom of Cambodia. Many of these ruins have been restored over the years.2 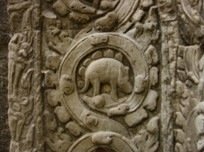 A photo of the stegosaurus-like bas-relief.

One collection of ruins, known as Angkor Thom, has purposely not been restored. The original edifices were either constructed during the reign of King Jayavarman VII or commissioned by him (AD 1181 – ca. 1210). The most significant of the buildings of Angkor Thom is the great temple-monastery of Ta Prohm. Today, the ruins lie majestically entwined with large jungle vines and the roots of towering tropical strangler fig trees, a decision the Angkor Conservancy took to give tourists a more adventurous, exciting experience.3

Most of the great Angkor ruins have vast displays of bas-relief depicting the various gods, goddesses, and other-worldly beings from the mythological stories and epic poems of ancient Hinduism (modified by centuries of Buddhism). Mingled with these images are actual known animals, like elephants, snakes, fish, and monkeys, in addition to dragon-like creatures that look like the stylized, elongated serpents (with feet and claws) found in Chinese art. 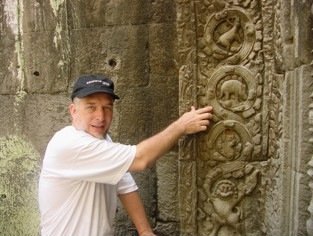 But among the ruins of Ta Prohm, near a huge stone entrance, one can see that the “roundels on pilasters on the south side of the west entrance are unusual in design.”4

What one sees are roundels depicting various common animals—pigs, monkeys, water buffaloes, roosters, snakes—and what appears to be a dinosaur! There are no mythological figures among the roundels, so one can reasonably conclude that these figures depict the animals that were commonly seen by the ancient Khmer people in the twelfth century. That means that only a little over 800 years ago, some dinosaurs were likely still living in the region of Cambodia! Of course this is no surprise to biblical creationists, because we know from Genesis 1 that land animals (such as dinosaurs) and humans were living together in the beginning, and that representatives of the land animals (e.g., dinosaurs) were saved on the Ark to repopulate the earth after the Flood only 4,300 years ago. [Ed. note: It has come to our attention that there are some who question the authenticity of this relief. If it is authentic, it is merely one more item that supports what we know to be authentic and 100% accurate: the account of the Word of God indicating man and land animals (including dinosaurs) lived together only a few thousand years ago. But even if this relief is found to be fraudulent, there are many other petroglyphs and legends that support the biblical account.]