The Dragons of Peru

At museums and other tourist spots in Peru, guides will tell you that the native cultures depicted only things that they saw. So what did the potter of the vessel above see that inspired a dragon image?

Peru is a fascinating country. It has mountains, rainforests, coasts, and deserts (in fact, it has one of the driest deserts in the world). But another exciting aspect of Peru is dragons.

Like many other countries around the world, there is evidence that dragons had something to do with Peru’s past.

Like many other countries around the world, there is evidence that dragons had something to do with Peru’s past. While some cultures have only oral legends of dragons and others have left only pictographs or petroglyphs (such as cave art or wall etchings), Peru has produced pottery along with its other references to dragons.

During a recent trip to Peru where I had the privilege of viewing amazing ancient ruins like Machu Picchu, the Nazca Lines, and Sacsayhuaman, my tour guides often stressed that these cultures drew only things they saw. Hence, we saw many depictions of birds, monkeys, spiders, and other common animals on pottery, clothing, and even the famous Nasca Lines, which can only be discerned from high above. 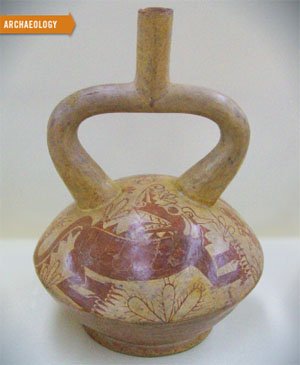 The piece of pottery (right), displayed in the Museum of the Nation in Lima, Peru (Museo de la Nación), comes from the Moche culture (as does every other item in the display), which flourished between A.D. 400 and 1100.1

So when we came across pottery depicting dragons, our logical conclusion was that the Moche artists saw these creatures, too. Of course, people often scoff and say that dragons could not be real, but considering the connection between dinosaurs and dragons, it is not so hard to fathom.2

Being land animals, dinosaurs (or dragons of the land) were created on Day Six (Genesis 1:24–31), went aboard Noah’s Ark (Genesis 6:20), and then came off the Ark into the post-Flood world (Genesis 8:16–19). It makes sense that many cultures would have seen these creatures from time to time before they died out. The ancients in Peru were no different.

I’ve always wondered how the world would view dinosaurs had researchers simply called them dragons when they first began digging up their bones.3 Instead, in 1841 Sir Richard Owen coined the word dinosaur, which means “terrible lizard.” If he had used the word dragon instead, what would the controversy be like today?

Previous Article Providential Provider Next Article One Nation Under . . . ?