Dragons—Did the Legends Come from the First “Fossil Hunters”? 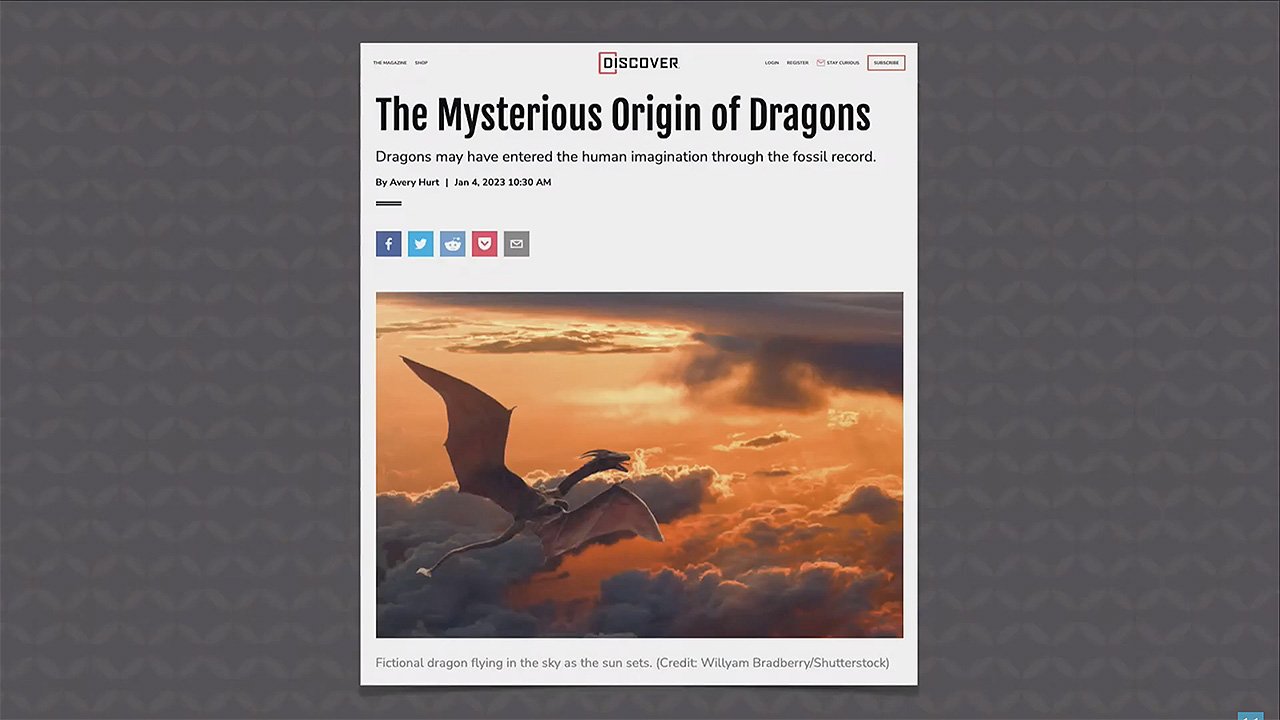 Cultures as diverse as the Chinese, Babylonians, Peruvians, Swedes, and North Africans all have ancient legends of dragons. Where did these legends come from? And how did such different and geographically diverse peoples come up with the same stories?

Well, that’s a question we’ve been asking for years—and we don’t often see attempts to answer it! But recently I saw an article titled “The Mysterious Origin of Dragons.” This article explored why and how “these magnificent creatures squirm[ed] and soar[ed] their way into our imaginations and mythology” and concluded that “ancient” people in the past must have

Conceived dragons and other mythical creatures after finding fossils of even more ancient creatures. . . . [Therefore it’s possible that] dragons are not entirely fictional beings. The people who imagined them and told stories about them were imagining and telling stories about animals that once walked the Earth. They got the details wrong — just as we often do when studying ancient fossils.

In the recent past, people actually lived with real live animals they called “dragons,” and many dragon legends are just the exaggerated memory of a time when humans and what we now call dinosaurs interacted with one another.

Now, this author is getting closer to what most likely actually happened! You see, there’s another explanation that better fits the plethora of dragon legends, as well as the art depicting dragons and other “mythical” beasts. And that explanation is that, in the recent past, people actually lived with real live animals they called “dragons,” and many dragon legends are just the exaggerated memory of a time when humans and what we now call dinosaurs interacted with one another. By the way, dinosaurs are land animals so they would have been the dragons that lived on the land. Now, people also referred to sea dragons and flying dragons, but these weren’t what are called dinosaurs but could have been creatures like the Kronosaurus and pterodactyl, etc.

You see, when we start with the history in God’s Word, we see these realities:

The article is right: it’s certainly possible that “dragons are not entirely fictional beings,” but the legends probably aren’t based on ancient peoples finding fossils. Rather, they are based on actual human-dinosaur interactions.

Discover the truth about dinosaurs in this article: What Really Happened to the Dinosaurs?

This item was discussed Wednesday on Answers News with cohosts Bryan Osborne, Tim Chaffey, and Dr. Jennifer Rivera. Answers News is our weekly news program filmed live before a studio audience here at the Creation Museum and broadcast on my Facebook page and the Answers in Genesis Facebook page. We also covered the following topics:

Watch the entire episode of Answers News for January 11, 2023.