Australia’s Aborigines ... Did They See Dinosaurs?

Australian Aborigines have stories of encounters with huge, sometimes frightening monsters which range from what sound like dinosaurs to giant marsupials, also believed to have long become extinct.

Africa’s Congo jungle is becoming increasingly known as the reputed refuge of a mysterious creature called Mokele-Mbembe.1 The locals appear familiar with this creature, which they readily identify from drawings of fossil reconstructions as being like one of the dinosaurs. Few realize, however, that similar accounts occur in other parts of the world. Australian Aborigines have stories of encounters with huge, sometimes frightening monsters which range from what sound like dinosaurs to giant marsupials, also believed to have long become extinct.

The term “Aboriginal” is loosely applied to the people who were living in Australia at the time of European settlement 200 years ago. There were hundreds of different tribes scattered across the continent, varying in their language and customs.2

The myths and legends of the Aboriginal people, including their accounts of the creation of the world, are known as the Dreamtime. Such stories feature monsters, of whom many are mythological. Others, however, may have reference to real creatures, the Aborigines even insisting on their past “flesh-and-blood” existence. Some of them are reminiscent of animals regarded as prehistoric, which supposedly became extinct tens of thousands, or even millions of years ago.

Aborigines did not keep written records—their knowledge and traditions were passed orally from one generation to the next.3 Such oral traditions tend not to last more than a few hundred years without being distorted out of recognition.4 This would suggest that some of these animals may have still been living in Australia some two to three hundred years ago, or even more recently.

Such a conclusion may surprise many, but it would explain why documented encounters with similar monsters post-date the time of European settlement.

For instance, the Geelong Advertiser, of Victoria, Australia, reported in July 1845 about the finding of unfossilized bone forming part of the knee joint of some gigantic animal. The paper reported showing it to an Aboriginal they regarded as particularly intelligent. He identified it immediately as a “bunyip” bone, and unhesitatingly drew the picture reproduced on page 25 of this Creation Ex Nihilo issue.

When the bone was shown to other Aboriginal people who “had no opportunity of communicating with each other,” they all instantly recognized the bone and the picture as being of a “bunyip,” a common word in some Aboriginal languages for a frightening monster. They gave detailed, consistent accounts of where a few people they knew had been killed by one of these. The creature was said to be amphibious, laid eggs, and from the descriptions, appeared to combine “the characteristics of a bird and an alligator”—i.e. a bipedal reptile. (Note that no crocodiles or alligators are found in Australia except in its far north—Geelong is deep in the south). One of the Aboriginals, named Mumbowran, showed “several deep wounds on his breast made by the claws of the animal.”5

The description and sketch certainly fits well with some form of bipedal dinosaur.

A large number of Aboriginal stories of creatures of possible dinosaurian origin have been collected by Rex Gilroy,6 an evolutionist. Since we should be cautious about over-reliance on this particular source without independent confirmation, a large number of the ones he describes have been omitted. However, Burrunjor and Kulta, the accounts of which appear below, also feature in a book by zoologist Karl Shuker.7

Extending from the Northern Territory’s Arnhem Land east through the Gulf of Carpentaria to Queensland’s Cape York district is the story of “Burrunjor.” The description is reminiscent of an Allosaurus, a smaller version of the well-known Tyrannosaurus. In 1950, cattlemen on the border between the Northern Territory and Queensland claimed losing stock to a strange beast which left mutilated, half-eaten corpses in its destructive wake. A part-Aboriginal tracker also claimed to have seen a bipedal reptile, 7–8 metres (25 feet) tall, moving through the scrub near Lagoon Creek on the Gulf Coast in 1961.

Some parts of northern Australia’s vastness are still little explored, and large areas of it are closed to public access. Perhaps some creatures unknown to science are still to be found there. That this is possible was shown a few years back when a tree, the Wollemi Pine, was found in a national park in New South Wales. Scientists said it was “like finding a small dinosaur.” The tree is known from its fossils in “dinosaur age” rock, but these are not found in any of the layers in between. Unlike an animal, a tree cannot run away and hide, yet this tree was completely unknown to science till recently.8

Some parts of Australia have traditions of huge reptiles suggestive of long-necked sauropods, the dinosaur group which includes Diplodocus and Apatosaurus. For instance, Central Australian tribes described “Kulta” as a giant serpent who lived in the swamps which once covered the region, and ate plants. He was said to have a small head at the end of a long, narrow neck, a massive, bulky body supported by four huge legs, and a long, pointed tail which trailed behind him. This is similar to the accounts of Wanambi from northern Australia, who features in Aboriginal cave paintings, and Kooleen and Myndie from Victoria.9

This actually fits the most common creationist models of the changing climate after Noah’s Flood.

Unfortunately, the Aborigines maintain, the “land eventually all dried up, the forests became desert, the swamps emptied, and Kulta died.”10 This actually fits the most common creationist models of the changing climate after Noah’s Flood.

Since most of the water for the Flood came up from under the ground (Genesis 7:11 and 8:2), the post-Flood oceans would have been warmer than today. This would have generated extra moisture in the atmosphere for centuries afterwards, providing ideal conditions for an ice age.11 This same increase in moisture would have meant that there was much more rainfall for centuries after the Flood in regions not affected by ice.

Eventually, the rainfall patterns would have “normalized” once all the excess oceanic heat had come into balance with the air temperature. This is consistent with the universally held view that Australia’s now-arid heart was once a lushly forested, humid environment. Thus Australia’s dinosaurs, at least, may have died out largely as a result of the environmental changes as vast areas of the inland relentlessly dried up.

Nessie: living in a Queensland lake?

While the controversy surrounding Scotland’s famous Loch Ness Monster waxes and wanes, many people are unaware that lake monsters have been reported elsewhere. Large unexplained animals similar to Nessie are said to inhabit several lakes, in both hemispheres. These are generally ones which are deep, remote, and have a water temperature around 10°C.12

Dennis Fields, a former missionary to Far North Queensland’s Kuku Yalanji tribespeople, told the Answers in Genesis ministry in Australia some years ago of a story the elders of the tribe told him, of a creature called Yarru (or Yarrba). The tribe inhabits the rainforest regions, where there are a number of waterholes in which, in earlier days, Yarru was said to live. There is a story of how the Yarru devoured a young maiden. The missionary asked one of the tribe’s artists to paint the story for him. The tribal artist, with very little formal education, had no knowledge of what so-called prehistoric animals looked like, and was drawing only from the descriptions handed down in the ancient stories. 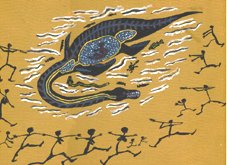 The painting (later donated to Answers in Genesis, and shown at the right) shows a creature with a remarkable resemblance to the extinct plesiosaurus.

European sightings of water monsters also often match this description.13 Most evolutionists, however, find this unacceptable, since they insist such creatures vanished with the dinosaurs over 65 million years ago.

For centuries, the Dharuk people have spoken of the mighty “Mirreeulla,” whose home is the Hawkesbury River near Sydney. Sightings of plesiosaur-like creatures in this river have continued to modern times, with some estimating the creature at up to 15 metres (50 feet) long.

Australia’s Aboriginal heritage is rapidly being lost. Many of the Dreamtime stories still recall events from their history, up to the dispersion at Babel, such as the great Flood.14 There are several traditions which suggest that the ancestors of today’s Aborigines may have had contact with the last few dinosaurian survivors of a rapidly drying continent. The details in the newspaper report of what seems to have been a bipedal dinosaur at Geelong last century seems hard to discount.

Apparent dinosaur sightings by man from centuries past are legion, in the form of dragon legends around the globe.15 This magazine has previously shown photographic evidence of ancient rock drawings of dinosaurs.16

The many Aboriginal accounts, even if only a portion of them have a basis in fact, are consistent with this pattern. Descriptions of dinosaur-like creatures are even found in the Bible (Job 40:15–41:34).

All of this contradicts the evolutionary belief system, which insists that no man has ever seen anything like a dinosaur, since evolutionists claim that these died out millions of years before man appeared.

For many years, Aboriginal stories of “savage giant kangaroos that preyed on men” were dismissed by Europeans as nonsense.17 “Everyone knows” that there can be no such thing as a flesh-eating kangaroo. The truth, however, is otherwise.

Though chiefly a root and fungus eater, today’s rufous bettong (one of the smallest species of kangaroo) is in fact frequently observed to chew on animal bones.18 It is also known on occasion to steal eggs from chicken yards. A related species, the burrowing bettong, will scavenge sheep carcasses.19

These rabbit-sized creatures are too small to prey upon large animals. In the past however, there were “giant bettongs” which weighed an estimated 70 kilograms, and which stood six or seven feet high.20

Known as the propleopine kangaroos, their teeth were more suggestive of carnivores than grazers. Their stout lower incisors were sharp and horizontally aligned, forming ideal stabbing weapons. The premolars were also shaped like great “buzz-saw” blades, strongly serrated and designed for severing tough foodstuffs.21 There seems little doubt that Propleopus oscillans and P. chillagoensis were the wolves of the kangaroo family.

Evolutionists claim they became extinct over 20,000 years ago. If this were true, it is exceedingly unlikely that the oral legends would have survived intact over this period of time. Once again we have a seemingly “mythical” Aboriginal account confirmed by the fossil record, and bringing so-called “prehistory” into line with the Bible’s account of the true history of the world.