Triceratops skulls entombed in Montana’s Upper Cretaceous Hell Creek Formation tell a story, but not the tale of being trapped by the sands of time! The nature of the rock layers in which the skulls are trapped is actually exactly what Bible-believing geologists would expect to see—even in their finest details—as a result of catastrophic burial of herds of these giant herbivores during the global Flood, only about 4,350 years ago.

A Matter of Time

Meticulously excavated rock layers containing over fifty Triceratops skulls reveals two distinct varieties of Triceratops—supposedly spanning about 2 million years, evolutionary paleontologists say. Scientists from the Museum of the Rockies took several years to complete the work, which they interpret as a record of trends in Triceratops snout evolution. In reality, excavating the skulls took much longer than it did to bury their massive owners in the first place.

The Triceratops, a giant herbivorous dinosaur, up to 30 feet long and nearly 10 feet tall with three horns on its head and a frill on its neck, is the predominant fossilized dinosaur found in eastern Montana’s Hell Creek Formation. Chipping away at a 300-foot column of sedimentary rock for fifteen years, paleontologists have mapped the position of each fossil. In their findings, published in “Evolutionary trends in Triceratops from the Hell Creek Formation, Montana,” they describe the locations and characteristics of not only fossils but also the substrate in which they are found. 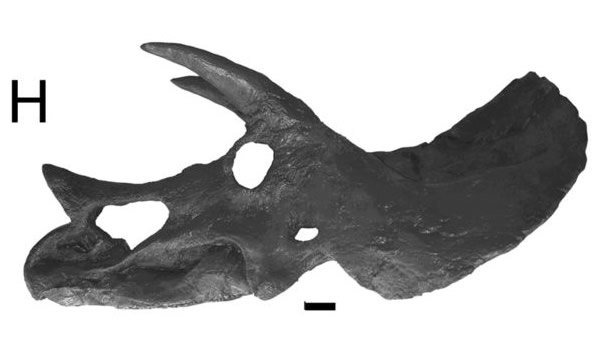 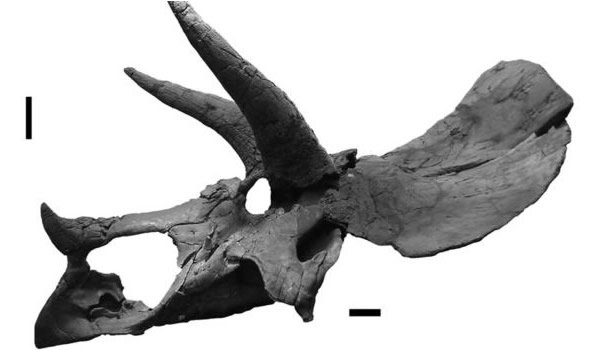 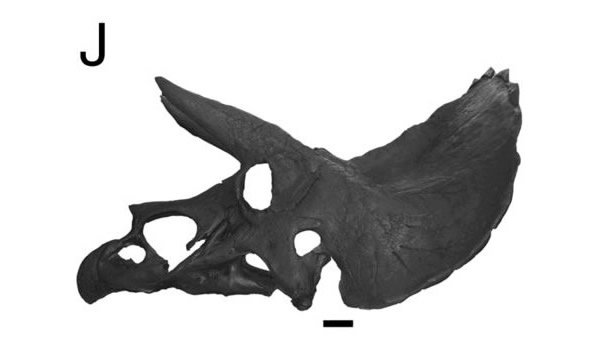 These are the reconstructed skulls of three representative Triceratops from the Upper Cretaceous Hell Creek Formation’s sedimentary layers, excavated top to bottom from the rock sequence said to span 1–2 million years of evolutionary time. In reality, the details of the substrate in which these animals were found is consistent with sediments deposited in a very short span of time such as occurred during the middle stage of the global Flood as sediment-bearing water continued to surge over the land. Several coexisting varieties of Triceratops—such as these with shorter nasal horns and long beaks (J) near the bottom of the formation and those with taller nasal horns and shorter beaks nearer the top (H)—were buried and preserved by this catastrophe in what is now eastern Montana. (Scale bars: 10 cm.) Images by J. Scannella et al., via PNAS.1

Not all Triceratops fossils are the same. While all have the iconic three horns-and-a-frill, the parts vary in their relative sizes and shapes. Not surprisingly, the skull and horn shape did change as Triceratops matured from infancy to adulthood. Whether other variations represent different species or just distinctions based on gender, age, or stage of development remains uncertain. Having found all these skulls from apparently mature animals in the same general location and—in their view—spanning up to two million of years of time, paleontologists conclude that these differences represent distinct species.

This striking change in physical display suggests they evolved, though it's difficult to say what drove the change.

“We went out and looked at where the fossils came from in context of the rock formation,” [explains] John Scannella, lead author of the study. “The ones found low in the formation look different from the ones found high up, there was a small nasal horn down low and big nasal horns up high, and in the middle features of both,” he said. “This striking change in physical display suggests they evolved, though it's difficult to say what drove the change.”

Whether these variations represent distinct species or an array of variations among interbreeding Triceratops, all are just varieties of Triceratops. These snout shape variations are the not-unexpected variations seen within an animal kind and are no more evolutionary in nature than the variations among Darwin’s finches. (Read more about how natural selection results in finch variety in “Reverse Evolution Causes Darwin’s Finches to Go Missing?” “Building a Beak,” and “Reverse Evolution Causes Darwin’s Finches to Go Missing?”) Such variations do not take a million years to develop. Dramatic variations and speciation, biological observations demonstrate, can occur very rapidly in living animals, and there is no reason to think biology worked any differently in the past. There is nothing about the discovery that demonstrates these distinctions were segregated in time or took a couple of million years to achieve. In fact, there is plenty to indicate otherwise!

A Closer Look at the Sands of Time

But what about the supposed two million year span? Did it really take 1–2 million years for the Triceratops herds in what is now Montana to tweak their snouts? And what was the evolutionary driving force for such a change? Why would Triceratops with a longer nasal horn and shorter beak have a better shot at survival and therefore be selected for than the shorter-horned variety? The “function” of the frills and horns on these animals is unknown in the first place, so evolutionists really have no idea what selective pressure could have driven a change in morphology.

Answers in Genesis geologist Dr. Andrew Snelling commented on the study published in the Proceedings of the National Academy of Sciences:

This is equivalent to 15–16 cycles of deposition, with four of those involving basal erosion as the first medium-grained sand bed was deposited in each of those four cycles. In each of these 15–16 depositional cycles the water current had to have slowed down to progressively deposit the finer grains.

Sedimentological experiments clearly indicate that such deposition of fining upwards beds does not require long periods of time, especially when the individual beds are 6–8 meters (20–26 feet) thick or less and there is a sustained sediment supply and water flow. And even clays do not take long to be transported and deposited, since experimental evidence has demonstrated that the fine clay particles flocculate into larger clumps that then are rapidly transported and deposited like sand grains.

The latest news from the world of the Triceratops fits the biblical history of the global Flood.

Thus, the latest news from the world of the Triceratops fits the biblical history of the global Flood that destroyed all the land animals on earth except those representatives of each kind preserved on Noah’s Ark. The types of sediments and the way they are arranged—when compared with experimental observations of the way water-borne sediments are deposited and how long such processes take—is consistent with the expected pattern produced by surging waters catastrophically rising to engulf the earth’s surface during the global Flood. Dr. Snelling shares his conclusion:

Therefore, the Hell Creek Formation can instead be interpreted, and should be interpreted based on the veracity of the biblical eyewitness account, as a series of sediment layers deposited rapidly within hours to a day within the global Flood cataclysm.

On that basis these 50 or so Triceratops fossils with slightly varying morphologies were simply buried in these rapidly accumulating sediments in this apparent order within hours to a day. So there is absolutely no evolutionary development here at all, just variations within the Triceratops genus that all lived at the same time being buried in these sediment layers on one day during the Flood.