Triceratops Tally up to Four in New Wyoming Dinosaur Graveyard

The first mass Triceratops burial site ever found has now revealed a fourth occupant. The fossils were discovered last year on Donley Darnell’s ranch near Newcastle, Wyoming, about 200 miles north of Cheyenne. Two months of excavation has thus far removed about 250 bones believed to belong to four Triceratops. “You normally never find more than one Triceratops in any one place,” says Dr. Anne Schulp of the Netherlands-based Naturalis Biodiversity Center. “But here we have—and these examples are also of different ages. A truly exciting find.”1

Paleontologists from the Black Hills Institute of Geologic Research, invited by rancher Darnell to investigate and working with paleontologists from Naturalis, expect the mass grave will ultimately yield one of the most complete Triceratops skeletons ever found. They have recovered a bone called a pterygoid from the palate of one. “The largest, more mature individual appears to be the most complete,” Black Hills paleontologist Peter Larson, reported in June. “One is just a bit smaller, and there's another one that by live weight is probably only half the size.”2 Since then, bones from another adult dinosaur have been found, bringing the total to three adults and a juvenile.

A complete Triceratops would have around 300 bones. However, the most complete skeletons to date—two from Wyoming and one from North Dakota—have had only 50–75% of their bones recovered. These fossilized dinosaurs don’t emerge from the ground with three horns and four legs intact and ready for display. The team originally expected the excavation to be completed this summer, but Larson says, “We have this big mass of bones we just can't separate. We will finish it next summer or spring.” The process of freeing and reassembling bones from rock is painstaking work, and much of it will be completed in the laboratory. 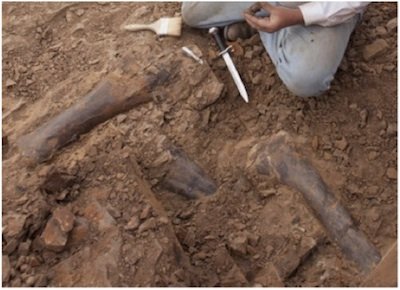 These are only a few of the large Triceratops leg bones found in the Wyoming mass burial site. Image by Esther Herberts/Naturalis, via The Huffington Post.3 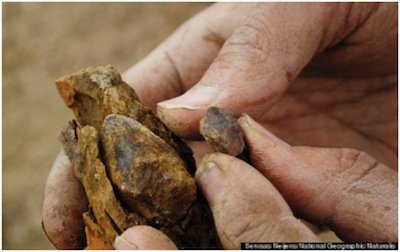 Paleontologist Dr. Anne Schulp compares the teeth of an adult and a juvenile Triceratops. Image by Servaas Neijens/National Geographic/Naturalis, via The Huffington Post.4

The paleontologists do not know the cause of death but speculate, based on evidence of violence in the chaotic mass of intertwined bones, that these triceratops were beset by hungry Tyrannosaurus rex. A few T. rex bones were found elsewhere on the rancher’s land, and, though the evidence has yet to be presented in a peer-reviewed journal, Larson believes two of the bones his group has found were “bitten through.”5

Larson believes the discovery of these Triceratops buried together means they lived and died together and, according to Associated Press, were then covered over by sinking masses of accumulating sediment and dirt over millions of years. “More rapid sedimentation would be able to preserve moments in time,” Larson says. “They're snapshots in history.”

This region of North America is no stranger to mass dinosaur graves. Not too far from this Triceratops dig in the Upper Cretaceous Lance Formation is a mass grave containing hundreds of hadrosaurs (the duck-billed Edmontosuarus). Wyoming’s Hanson Research Station at Hanson Ranch has been excavated by Dr. Art Chadwick yearly since 1997.6 Findings there indicate, according to Answers in Genesis geologist Dr. Andrew Snelling, that a large herd of hadrosaurs was catastrophically destroyed and “washed together and buried in a massive bone bed.”

The Hanson research area alone covers 247 acres and contains an estimated 25,000 animals. Scientists there map every discovery precisely with GPS coordinates and other data that captures each fossil bone’s position and orientation. That data, along with the fossil bones themselves, enables them to produce three-dimensional images of the fossil bones and their relative positions in the dig site.

Dr. Chadwick’s analysis of the Hanson Ranch mass dinosaur grave, which is one of the largest in the world, demonstrates that it did not result from slow gradual accumulation of sediment over millions of years. There is no sign of weathering between layers or evidence of separately transported bones but rather evidence that the bones were all sorted at once by water, with the larger ones ending up on the bottom. Quoted in Answers Magazine, Dr. Chadwick explains, “The vertebrate deposit is in a relatively homogeneous mudstone, not river sand. The disposition of the bones in the mudstone requires that the mud and bones were deposited together as a single catastrophic unit.”7

Dr. Snelling, describing the geology of the region, explains:

The Lance Formation is an enigma. The top of the unit marks the K-T boundary, with the overlying Fort Union Formation containing coal. But the unit is poorly defined and its internal layer sequence is not well known, due to poor outcrops over much of the area it covers. It is relatively thick. It wasn’t produced by slow sedimentation but contains tempestites (storm beds) and lots of slumping suggestive of massive landslides during storms. That is not a description of a delta [with sequentially sinking accumulations of dirt, as the Associated Press report on Fox News describes,] but of stormy flood conditions with rapid unstable sediment accumulation, most suited to burial and fossilization of large dinosaurs, preserving “snapshots” (rapid moments) in fossil graveyards.

Eroding a Way to the Past

Larson notes that a mile of earth once covered the Triceratops bones and that land eroded as the Black Hills rose, exposing some bones and leaving others in a shallow grave beneath a foot of dirt. Dr. Snelling says:

Just how much more sediment was deposited on top of the Lance Formation in the area is unclear, because it isn’t clear how much was eroded away to expose the beds at today’s surface.  But even if a mile thickness of further sediments had been deposited on top of the Lance Formation here, it would have been rapidly eroded away as the Black Hills were rapidly uplifted at the end of the Flood.

Commenting on the unusual discovery of several Triceratops together, Dr. Snelling says:

It is true that Triceratops are often found fossilized as separated individuals, rather than in a group like these. On the Hanson Ranch there are a few scattered remnants of Triceratops, but so far no major skeletal remains (though it is suspected some are there, but not yet excavated). The unusual finding of so many bones from a few individuals all together suggests unique catastrophic conditions caught a group of them unawares.

That discovery is not unlike the hadrosaur bone bed on the nearby Hanson Ranch, which is the product of thousands of hadrosaurs being swept away under catastrophic flood conditions, their bodies being ripped apart and their disarticulated bones being piled together in an extensive layer.

Biblical Flood, Not a Feeding Frenzy, Filled This Grave

But as to any role potentially played by a T. rex in the production of this pile of bones, we should be more guarded. Larson says that a T. rex “would kind of chop the carcass up with their giant, shearing jaws,”8 adding, “I think we also have a feeding site for Tyrannosaurus rex.”9 However, assuming the bitten bones Larson mentions turn out to match the many examples of apparent T. rex bites on Triceratops bones in the fossil record, there is no reason to speculate some dramatic assault upon a peaceful family of Triceratops ending in a disarticulated disaster. A 2012 study of eighteen such bites strongly suggests that T. rex only ate Triceratops that were already dead,10 making the more likely scenario one in which a T. rex munched or scavenged prior to the bones’ watery transport to a group grave. Dr. Snelling notes:

How do we know the Triceratops wasn’t bitten by a T. rex before being swept away and buried? It could be an old wound. There is no evidence the T. rex disarticulated any Triceratops. Even if a Triceratops was injured by a T. rex, the raging Flood waters were responsible for sweeping these animals away and burying them.

It will be interesting to see how extensive the world’s first known Triceratops mass graveyard extends and how many individuals are ultimately found in it. But like other mass dinosaur graveyards, the findings are consistent with the violent and catastrophic events associated with the global Flood of Noah’s time, no more than 4,500 years ago according to the history recorded in God’s Word.