The Key to the Age of the Earth

Most of these Christians ignore the account of Noah’s Flood in Genesis 6–9 and its implications for understanding the geological history of the earth.

I have noticed a strange phenomenon in books written by Christians who say they believe the Bible but who attempt to squeeze millions of years of earth history into or before the six days of creation described in Genesis 1. Most of these Christians ignore the account of Noah’s Flood in Genesis 6–9 and its implications for understanding the geological history of the earth.

I clearly remember separate conversations I recently had with two of my former seminary professors. Both men are justly respected for their thorough scholarship and their commitment to the inerrant Word of God. Both believe that Noah’s Flood was global, but both also accept the idea of billions of years of earth history because geologists have supposedly proven it from the rock record. Like so many conservative Bible scholars, they have only a superficial understanding of geology and of the biblical and scientific evidence for a 6,000-year-old creation. They had never thought through the implications of Noah’s Flood on their belief in billions of years. So, why is the Flood so crucial to the question of the age of the earth? 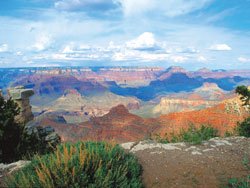 Millions of years of erosion by the Colorado River was once the standard explanation for the formation of Grand Canyon. Even some evolutionary geologists reject that view today, attributing the Canyon’s formation to many catastrophic floods. But their worldview can’t accept the single global Flood of Noah’s day and its after effects.

We need to realize that for the first 1,800 years of church history virtually all Christians believed that Noah’s Flood was a global catastrophe. It was not until the early nineteenth century that Christians began to abandon this belief, as deistic and atheistic geologists developed new hypotheses of earth history involving millions of years.

As they looked at the thousands of feet of rock layers and fossils worldwide, many early geologists, both Christian and non-Christian, simply assumed that the Flood could not have produced them. Based on this and other antibiblical assumptions, they invented theories that those rock layers and fossils had formed long before man came into existence. They proposed two groups of theories. Some said the rocks were formed by a succession of regional or global catastrophic floods separated by long ages of time (a view known as “catastrophism”). Others said the rocks were formed by slow, gradual processes of sedimentation and erosion (a view known as “uniformitarianism”).

These old-earth geologists didn’t do any experiments to show whether the Flood waters could have produced these rock layers. And because they didn’t pay careful attention to Scripture, they had inaccurate views of the duration, violence, and complex nature of the Flood. One result of their theories was that people began to believe that Noah’s Flood didn’t happen, or that it wasn’t global, or that it left no surviving geological evidence.

But think about it. A global, year-long, catastrophic Flood did happen at the time of Noah. We can say this with confidence because of the clear authority of the historical record in Genesis. We can also confidently assert that such a catastrophe would have left a massive amount of geological evidence, more than any event before or since. It would have produced vast sedimentary deposits, burying billions of land, air, and sea creatures along with much of the vegetation. And it would have done so on the entire planet. Then as the waters receded with great power from the continents, they would have eroded many of the sediments laid down in the first half of the Flood and redeposited them elsewhere.

Our minds are boggled when we try to imagine the geological devastation. The worst floods since then are like a Sunday school picnic on a sunny day compared to Noah’s Flood. The geological features of the earth today are exactly what we should expect to result from such a complex, destructive event. To say that Noah’s Flood left no geological evidence or that it was all erased by the relatively miniscule processes of geological change since this unique event is an absurdity of the highest order. 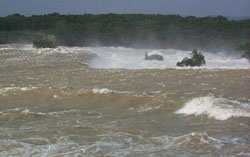 This small-scale example helps us understand how a global flood can drastically affect geology.

The floodwaters (above) of the Canyon Lake Spillway along the Guadalupe River in Texas were moving at 107,000 ft3/sec (normal 175 ft3/sec). After the waters receded, carved bedrock was the result of the rushing water (below). 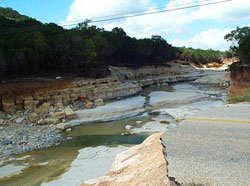 While researching the early nineteenth century developments in geology, I often wanted to pound the table in protest as I read the writings of the old-earth geologists and saw how they ignored the biblical text (especially on the Flood) but declared authoritatively that their theories did not conflict with the Bible. At other times, I almost wept with tears of joy as I read the biblically sound, geologically informed, and compelling arguments of a handful of Christians, known as the “Scriptural geologists,” who back then were refuting these old-earth myths. Sadly, most of the church followed the secular thinking of old-earth geologists and ignored or superficially dismissed the arguments of the Scriptural geologists.1

The debate about the age of the earth is ultimately a question of whose word we are going to trust: the all-knowing truthful Creator who has given us His inerrant book (the Bible) or finite, sinful creatures who give us their books that contain errors and therefore are frequently revised. If you firmly trust and carefully read the Bible and become informed on creationist interpretations of the geological record, you can easily see how the rocks of the earth powerfully confirm the Bible’s teaching, both about Noah’s Flood and a young earth.

Dr. Terry Mortenson is a well-known speaker, researcher, and writer. He earned his doctorate in history of geology from England’s University of Coventry and his M.Div. from Trinity Evangelical Divinity School in Deerfield, Illinois. He worked for 25 years in Eastern Europe and other countries for Campus Crusade for Christ.

See Utah’s Testimony to Catastrophe for a fascinating report on geological formations in Utah (USA) which give testimony to a global catastrophe.

Are Fossils the Result of Noah’s Flood?

Uniformity’s slogan, “the present is the key to the past,” reflects the popular view of the origin of the features in the rock and fossil record. I think the great Flood of Noah’s day is a better explanation.

First note that very few fossils are forming today and then only in the case of rapid burial by water. For instance, what happens to a fish when it dies? It decays and is eaten by scavengers. Yet many fish fossils are so exquisitely preserved that even the scales and organs are preserved. Obviously there was no time for decay and bacterial action. We can certainly say that something extraordinary happened to form the fossils.

Furthermore, most fossils occur in huge fossil graveyards where things from different habitats are mixed together in a watery grave. Marine invertebrates are the predominant type of fossil, but these are found on the continents within catastrophically deposited rock units.

Of the several different kinds of fossils listed below, each one requires rapid burial and circumstances which are seldom, if ever, at work today. The great Flood of Noah’s day, which destroyed a world full of life, triggered a series of events that would explain most fossils.

Mineralization: This happens by partial or entire replacement of an organism by minerals, usually one molecule at a time as the organism decays. Time is involved but not before burial. Petrification occurs when the replacing mineral is silica.

Impressions: These common fossils occur when the entire organism is replaced by the same material as the host rock leaving only the form of an organism. The preserved detail indicates no time for decay.

Hard parts: Broken bones and shells are usually found. For instance, limbs ripped from dinosaurs, found in fossil graveyards, are the rule.

Previous Article Setting the Stage for an Ice Age Next Article A Changed View, A Changed Heart