Tibetan natives are able to tolerate high-altitude conditions to which other people do not acclimate well. The secret of their success, researchers have discovered, is a genetic inheritance obtained from mixing with the long-extinct Denisovan people. 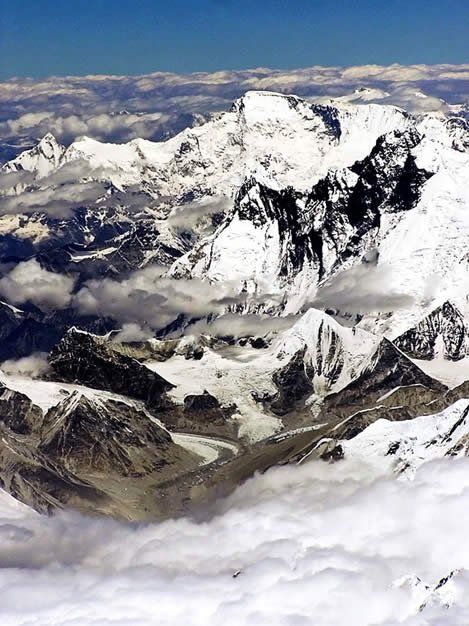 The Tibetan Plateau is located at an elevation of over 13,000 feet in the Himalaya Mountains. The extreme elevation with its associated low oxygen tension presents a challenge to the physiology of its inhabitants. Native Tibetans, however, have a genetic variation that helps them thrive at this elevation. That genetic variation has been traced to past intermarriage with the now-extinct Denisovan people. Image courtesy of Wikipedia, http://en.wikipedia.org/wiki/Tibet#mediaviewer/File:Himalayas-Lhasa15.JPG

Despite living all their lives in the low oxygen tension of the Tibetan plateau at an altitude above 13,000 feet, Tibet natives do not develop extremely elevated hemoglobin levels with associated increased blood viscosity like immigrants and long-term visitors do. Therefore, they have a lower incidence of related cardiac complications than people who move to their extreme elevation, and they also have fewer pregnancy complications and deliver healthier babies than women who have moved to the region.

Tibet natives do not develop extremely elevated hemoglobin levels with associated increased blood viscosity like immigrants and long-term visitors do.

At extreme elevations, our bodies are equipped to respond to chronically low atmospheric oxygen by synthesizing extra oxygen-carrying hemoglobin. This increases the oxygen-carrying efficiency of our blood. For this reason, runners sometimes train at higher elevations to gain a competitive edge. Within limits, this response—mediated by a transcription factor produced by the gene EPAS1—is a good thing. But too much of a good thing is not so good.

If the blood becomes too hemoglobin rich—a problem seen in some people who move to Tibet—then the heart can be overworked due to elevated blood viscosity, and cardiac complications can ensue. The blood of Tibet’s natives does not reach the excessive hemoglobin levels found in non-natives, naturally stopping the synthesizing process before dangerously high hemoglobin levels are reached. Biologist Rasmus Nielsen of University of California, Berkeley, and his team have learned that Tibetan natives’ genomes have a variant form of EPAS1, and this variant limits the physiologic response to chronic atmospheric oxygen deprivation.

The Height of Variation

The researchers concluded that natural selection must have selected strongly for Tibetans carrying this genetic variant, easily explained considering non-natives living on the plateau are at increased risk for difficulties with childbearing.1 The question was: where did Tibet’s native populace acquire this genetic variant of EPAS1? After looking for matching genetic patterns in databases worldwide, the team found the Tibetan version of EPAS1 in only two Han Chinese people in the database and in Denisovan DNA.

Denisovans are an extinct variety of “archaic humans” native to Siberia’s Altai Mountain region. To date, the only recovered Denisovan fossils are a girl’s finger bone, a toe bone from someone else, and a few teeth. Denisovan DNA is distinguishable from Neanderthal and modern human DNA, though all are fully human of course. Denisovans have, however, left their genetic footprints in the genomes of the “archaic human” fossils in Spain’s Sima de los Huesos, a Neanderthal toe found in Siberia, and modern Melanesians and East Asians. Denisovan and Neanderthal genetic markers can also be tracked in the modern human immune system. While we know little about the physical characteristics of the Denisovan people, Tibetans can now be added to their list of relatives, and the benefit of the Denisovan genetic input lingering in Tibet’s populace is apparent even today.

This finding shows an unmistakably beneficial contribution from the Denisovan genome for people needing to adapt to extreme altitude:

Our findings imply that one of the most clear-cut examples of human adaptation is likely to be due to a similar mechanism of gene flow from archaic hominins into modern humans. With our increased understanding that human evolution has involved a substantial amount of gene flow from various archaic species, we are now also starting to understand that adaptation to local environments may have been facilitated by gene flow from other hominins that may already have been adapted to those environments.2

The pattern of the matching genetic material in this study is best explained by past hybridization between Denisovans and the ancestors of the Tibetan people. The genetic marker patterns fit this scenario far better than a simple shared ancestry, Nielsen’s team concluded:

We have very clear evidence that this version of the gene came from Denisovans, a mysterious human relative that went extinct 40,000-50,000 years ago, around the same time as the more well-known Neanderthals, under pressure from modern humans. This shows very clearly and directly that humans evolved and adapted to new environments by getting their genes from another species. We found part of the EPAS1 gene in Tibetans is almost identical to the gene in Denisovans and very different from all other humans.3

The dates assigned to the Denisovans come from the usual worldview-based assumptions and circular reasoning inherent in molecular clock dating. As to the two Han Chinese, Nielsen notes that their ancestors could have received a Tibetan input of genetic material recently or, alternatively, may have originally received a large influx of the genetic variant that was diluted and lost from most of the Han population due to the lack of high altitude selective pressure.

In truth, this very interesting discovery has nothing to do with human evolution. Ultimately, all the people involved, past or present, are simply human beings. What the discovery does demonstrate, however, is how natural selection can operate to make a genetic variation like this one—a variation in which a normal physiologic function is limited—into a helpful population characteristic that enabled Tibetan natives to occupy and thrive in their unusual corner of the world.

Genetic variations such as mutations do not result in the origin of novel traits necessary for molecules-to-man evolution, but variations may be not only harmless but like this one beneficial under certain circumstances. (Recall that sickle cell trait is harmful to human health in general but beneficial in reducing susceptibility to malaria in endemic areas. See “Are There Beneficial Mutations?” to learn more.)

Genetic data on Neanderthals and Denisovans has demonstrated a fact already clear from the Bible: humans are all of one race. (Dr. David DeWitt describes how the genetic discoveries that surprised many evolutionary scientists were no surprise to scientists with a biblical perspective in “Does the Creation Model Make Predictions? Absolutely!”)

Genetic mixing of people groups, whether classified “archaic” or modern, is no surprise as all descended from Adam.

Genetic mixing of people groups, whether classified “archaic” or modern, is no surprise as all descended from Adam. Furthermore, only people descended from Noah’s family—the only people to survive the Flood—are the source of the gene pool we see today. Noah’s descendants dispersed from the Tower of Babel. As people groups became isolated, limitations in genetic variability combined with other genetic phenomena such as mutations and founder effects produced the people groups anthropologists call Neanderthals, Denisovans, and many others. The fact that their genetic presence can now be tracked across the world’s geography testifies to the fact that they and all people are related, some more closely than others. The frequent and far-flung genetic footprints of the Denisovans do not represent evolutionary emergence from Africa but dispersal from the plains of Shinar (Genesis 10–11).