Common ancestor of Neanderthals and Homo sapiens said to have made spears.

“Hafted” spear tips—stone spear tips attached to shafts—were important tools for Neanderthals and for early modern humans. Fossils of animals with injuries suggesting they had been brought down by projectile weapons abound. Dinner-on-the-hoof could be more reliably obtained with a real spear than with a sharp stick or a club. 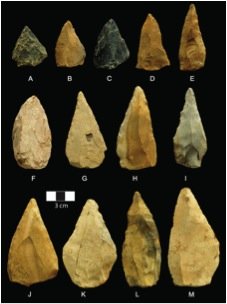 Here are some of the 210 stone tips from the Kathu Pan 1 Middle Pleistocene archaeological site in South Africa. Most are made of banded ironstone. All the tips in this photo have had their tips sharpened symmetrically as would be done with a projectile weapon. Many of them have fractures at the tips, bases, and lateral edges consistent with those found on spears. And they have marks on their bases signifying shaping to allow for securing to a shaft. Too large for use on arrows, they were likely spear points. Image by J. Wilkins et al., via Science.1

“There is a reason that modern bow-hunters tip their arrows with razor-sharp edges. These cutting tips are extremely lethal when compared to the effects from a sharpened stick. Early humans learned this fact earlier than previously thought,” explains Benjamin Schoville, co-author of a study just published in Science. He and his colleagues have meticulously analyzed a group of stone tips from a 1979 excavation at the Kathu Pan 1 archaeological site in South Africa. The tips were found in a Middle Pleistocene excavation that was later dated to around 500,000 years using optically stimulated luminescence2 and U-series/electron spin resonance dating.

The apparent antiquity of these tips combined with good evidence that they were hafted onto spear shafts suggests, the researchers say, that the earliest humans had developed the skill of making hafted spears before the common ancestors of Neanderthals and early modern humans diverged. Previous evidence for hafted spear tips is conventionally dated at about 300,000 years.

Rather than being invented twice, or by one group learning from the other, stone-tipped spear technology was in place much earlier.

“Rather than being invented twice, or by one group learning from the other, stone-tipped spear technology was in place much earlier,” Schoville says. “Although both Neandertals and humans used stone-tipped spears, this is the first evidence that this technology originated prior to or near the divergence of these two species.” Based on the dates obtained from the site, the researchers attribute the stone tips to Homo heidelbergensis, believed by evolutionists to have been the last common ancestor of Neanderthals and early modern man.

Given that the wooden handles of spears would have long since rotted, how can researchers determine that the stone tips found at Kathu Pan 1 were mounted on spears? There are a number of clues.

“When points are used as spear tips, there is a lot of damage that forms at the tip of the point, and large distinctive fractures form,” explains coauthor Kyle Brown. “The damage on these ancient stone spear points is remarkably similar to those produced with our calibrated crossbow experiment, and we demonstrate they are not easily created from other processes.” Brown made replicas of the stone tips from similar materials (mainly banded ironstone), hafted them onto dowels, and fired them at animal carcasses. Though these were spears, a calibrated crossbow was used to achieve uniformity. They performed adequately and upon subsequent examination showed the kind of wear found on the original tips.

The stone tips had markings near the bases consistent with additional flakes having been chiseled away to create a groove to secure the tip to a spear handle. The tips are the right size and contour for spear tips but are too large for arrowheads or darts. Additionally, these sharp stones were symmetrically sharpened, as would be expected from a sharp tool used as a projectile. A cutting tool is ordinarily sharpened asymmetrically, sharpening only the side used for cutting.3

“It now looks like some of the traits that we associate with modern humans and our nearest relatives can be traced further back in our lineage,” says lead author Jayne Wilkins. “This changes the way we think about early human adaptations and capacities before the origin of our own species.”

Evolutionists consider Homo heidelbergensis to be more evolved than Homo erectus and to be the last common ancestor of Neanderthals and early modern man. Homo heidelbergensis skulls have less prominent features than heavier boned, brow-ridged Neanderthals. Most of the known Homo heidelbergensis fossils have been found at La Sima de los Huesos in Spain. (See “Dispute Over Largest Group of Human Fossils” for a discussion of the controversial re-classification of these fossils and diagrams of the evolutionary tree.)

Different groups carried with them differing degrees of skill, knowledge, and ability to exploit the resources in the environment.

The people descended from Noah’s family were technologically capable, intelligent people. (See The Genius of Ancient Man) They initially used their technological prowess to construct the Tower at Babel and to stubbornly root their civilization in the region of Shinar in defiance of God’s command to disperse and spread humanity around the globe. God therefore confused their languages to scatter them. Different groups carried with them differing degrees of skill, knowledge, and ability to exploit the resources in the environment. But all of these people would have been intelligent, certainly capable of constructing some tools as needed. Thus it is no surprise that evidence of human intelligence in ancient varieties of humans keeps turning up.

Fossils of people descended from those dispersed from the Tower of Babel are found in various layers of Pleistocene rocks, which were laid down during the Ice Age. (The Ice Age occurred after the global Flood of about 2350 BC and was triggered by it.) Variations exist between these skeletons, with Homo erectus being found in the deepest layers, but they are as human as we are. Homo heidelbergensis fossils are found in layers dated by evolutionists back to around 600,000 years. Neanderthals appear above that level, and only early modern humans are preserved in layers above these. Biblically we understand that a variety of intelligent people dispersed from Babel, and these human fossils track the dispersal of them and their descendants. The evidence of early and sophisticated spear construction is consistent with the biblical record.