The winter solstice has a special effect at Ireland’s most famous megalith. An astronomer believes we can use this to recalibrate early dates to match biblical history.

Stonehenge is one of literally thousands of the massive stone monuments, called megaliths, that dot the landscape of Europe and other lands. They inspire endless fascination, as we wonder why early people devoted so much labor to these structures. Since their builders left no written records, we must piece together answers based on limited clues. Bible-believing Christians are also interested to fill in these gaps about the spread of human civilization after Noah’s Flood.

One mystery, in particular, puzzles believers. Secular archaeologists assign dates to most of these stone structures of 2500–3000 BC. Solid dates based on multiple lines of evidence are extremely scant prior to the time of Abraham, yet dating radiocarbon in wood or charcoal, when available, sometimes seems to confirm these older dates. That would put these artifacts before the Flood, even though human civilization didn’t spread until well after the Flood (2350 BC, according to the chronological information given in our Bibles). How can Christians reconcile these early dates with the Bible?

Clearly something is wrong with radiocarbon dates, but what? As an astronomer who analyzes how humans mark time by the regular movement of celestial bodies, I have long wondered whether different branches of science could work together to solve these questions. If we could somehow find a reliable, independent astronomical way to date stone structures, perhaps we could show how older radiocarbon “dates” must be revised to match these more accurate astronomical dates, which are certain to line up with the Bible’s timeline. 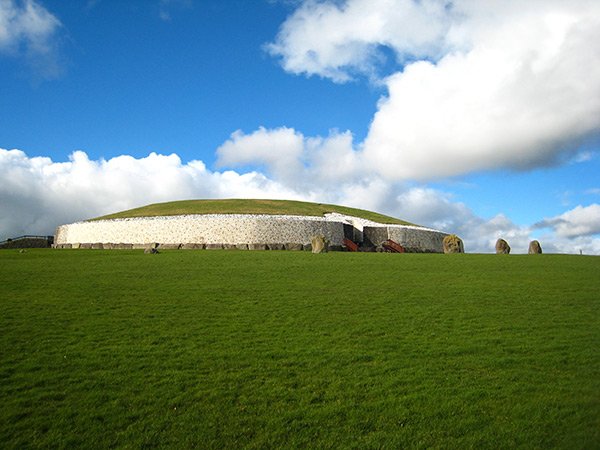 The mysterious builders of Newgrange had to transport over 200,000 tons of stones to make this ancient megalith.

How exciting that would be! We could then begin to revise the radiometric dates in archaeology to match biblical dates. Instead of dates going back tens of thousands of years, we could begin nailing down precisely when people built things between the time of the Tower of Babel and Abraham.

The problem is that most of these sites have been reworked and disturbed over the centuries, so we can’t be sure the stones line up correctly . . . with one possible exception, Newgrange, in County Meath, Ireland.

I was intrigued to learn that this site has a skylight above the entryway, called a roofbox, which lines up with the winter solstice. Since the sunrise on the winter solstice changes slowly but predictably over the centuries, astronomers can calculate where it rose in the past. If we could determine the actual date that early post-Babel settlers constructed the megalith’s roofbox, then we could show how it differs from radiocarbon dates.

But as with all science, it’s not as easy as it sounds. Scientists continually gather new information that seems to get closer to the answer but then raises new questions. And that is the case here. Yet each step brings us closer to a possible solution, so the effort is worth it.

The Brú na Bóinne (Palace of the Boyne, in English) is a complex of megaliths around a bend in the River Boyne in County Meath, Ireland. The most famous structure is Newgrange. Newgrange is a man-made mound built atop a hill to give it a commanding view of the surrounding countryside. The mound, made of alternating layers of earth and stone, is 250 feet (76 m) across and 40 feet (12 m) high.

A 62-foot (19 m) passage terminates in a chamber with a vault 20 feet (6 m) high. Three smaller recesses, or alcoves, jut off the central chamber, producing a narrow, cross-like floor plan.

Astonishingly, the passage, chamber, and alcoves remain dry after all these years. Perhaps one reason is the grooves cut into the stones in the ceiling to redirect groundwater. Additionally, the joints between stones were caulked with burnt soil and sand.

The mound is ringed with large stones, including a large stone in front of the entrance engraved with a distinctive spiral pattern. Spirals and other figures grace some of the slab walls along the passage, and a few engravings appear on the walls of the chamber and alcoves.

Window to the Winter Solstice

The entrance to Newgrange has a roofbox above the doorway. This allows the sunlight on the winter solstice (the shortest day of the year) to enter the passage and shine a beam into the interior chamber. 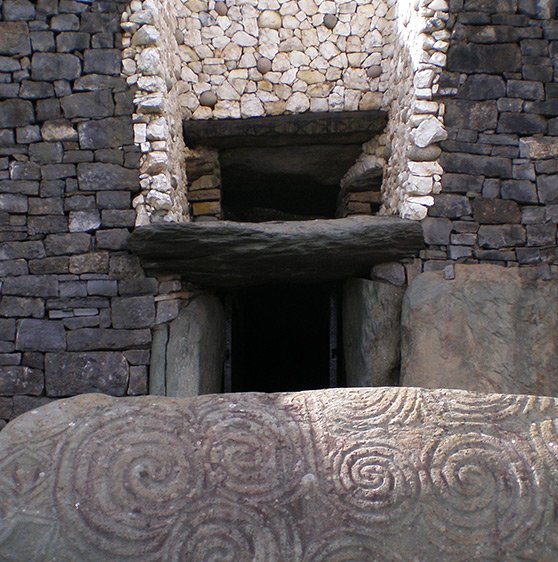 Newgrange is thought to be several hundred years older than England’s Stonehenge and Egypt’s Great Pyramids. Unlike those sites, the stones of Newgrange do not appear to have been cut in a quarry but are made of natural stones that were transported some distance—and uphill. Some of the large stones weigh more than five tons. The total weight of transported stones exceeds 200,000 tons. Clearly, Newgrange required tremendous organization and effort.

The entrance seems to have been blocked not long after construction, probably by collapsing dirt but perhaps intentionally. Eventually dirt hid the outer ring of stones as well. The mound was known since Roman times, but the passage remained hidden until 1699, when workers harvesting building stones uncovered the entrance. Over the next two centuries, curious people from all over Europe visited Newgrange and carted off untold artifacts, leaving behind graffiti.

The Purpose of Newgrange?

By 1890 the British government began to protect the site, and serious archaeological studies began. The most extensive was by Michael J. O’Kelly from 1962 until 1975. He found burnt bone fragments from about five people in front of the alcoves. Perhaps most significant was his find of the roofbox above the inner chamber. Previously, it had been filled with soil and rocks.

He noticed that the passage rises away from the entrance so that outside light cannot pass into the inner chamber. However, the relatively small window in the roofbox permits light to reach the chamber. Even this is limited. The only direct sunlight that ever reaches the chamber is shortly after sunrise on the shortest day of the year, the winter solstice.

Based on this, some archaeologists have suggested that the purpose of Newgrange was to serve as an observatory to mark the arrival of the winter solstice. Others believe the human remains suggest that Newgrange was a burial site. Perhaps Newgrange served both purposes. There is much speculation about these questions, but we may never know.

When Was Newgrange Built?

Dating the radiocarbon in the caulk’s charcoal has yielded a date of 3150 ± 100 BC. However, creationists question such early dates that precede the Flood. Furthermore, these dates are built on many questionable assumptions. Interestingly, the raw radiocarbon date for Newgrange is about 700 years younger than 3150 BC—much closer to the time of the dispersion at Babel. But secular archaeologists have adjusted the raw dates to match their rules for recalibration that are based on nonbiblical assumptions, such as the rate of radiocarbon production in the past. Clearly their rules for calibration need more calibration.

It would be exciting if we could confirm the age of the Newgrange site by comparing the alignment of the passage and roofbox to the winter solstice. Someone has already tried to do this, though his analysis is based on some unprovable assumptions.

Irish astrophysicist Tom Ray found that the winter solstice light floods the chamber four minutes after sunrise. The delay is attributed to slight changes in the tilt of the earth’s axis over the last few thousand years. Ray believes that the earth’s axis in 3150 BC would give the maximum lighting at sunrise on the winter solstice. It would even directly illuminate a spiral pattern on one of the smaller chamber walls. Thus, Ray thought he had confirmed the radiocarbon date.

At first glance, his deduction seems reasonable, but other factors would change the calculation. For instance, at least one of the stones lining the passage has slipped, restricting the view of the roofbox. The original alignment of that stone is uncertain. Furthermore, other stones may have slipped as well. A similar study just a few years prior to Ray’s suggested a much broader range of dates. So a precise date is still uncertain.

Another concern is the builders’ original intent for the alignment. Ray suggested they intended to illuminate the pattern on one wall. What about a location on the floor? Since we do not know, other conclusions are very possible. The main reason people have accepted Ray’s conclusion most likely is that it matches the generally accepted radiometric dates, but as I’ve noted, these are full of unverified assumptions. 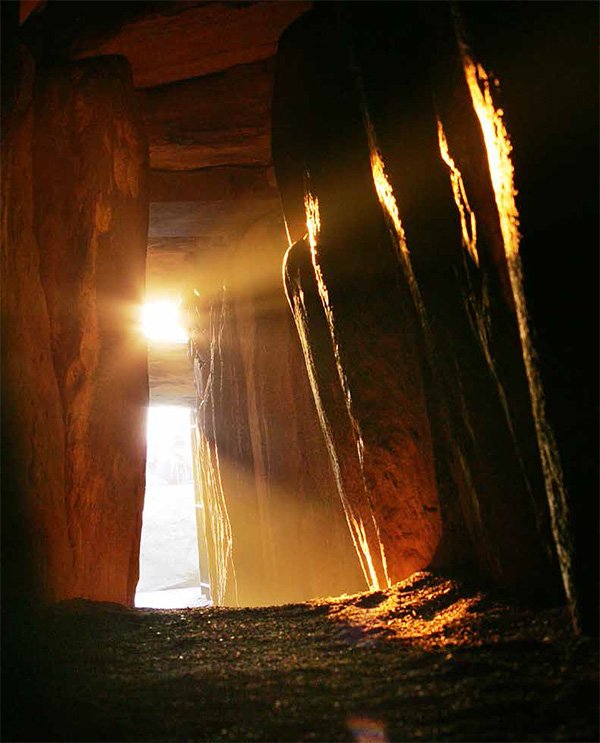 A skylight above the doorway at Newgrange directs light into the structure’s center only once a year.

When reports say that astronomical dates appear to corroborate radiocarbon dates, we need to be cautious. The interpretation depends upon many assumptions. If the dates contradict Scripture, we need to reexamine the assumptions. This takes patience and further research of the possibilities. That’s the nature of science and archaeology.

Sometimes we have to wait for the development of new high-tech research tools. (Infrared thermography, for example, allowed archaeologists to find hidden chambers behind King Tut’s tomb in 2015.)

Could the roofbox’s lighting serve a broader purpose than to mark a spot on the wall, as Ray’s theory requires? If creationists can identify a more reasonable scientific interpretation of the best alignment, archaeologists could use this to find the true date and better calibrate radiocarbon dates.

Christians should continue to take an active interest in uncovering our past and think creatively about ways to overcome the limits of human knowledge. We want to paint a clearer picture of world history and show that it truly aligns with the Bible and glorifies God. We should never fear what we discover. We know that we have much more to learn. By starting with the key eyewitness to world history, the Bible, we take a crucial step in the right direction that others ignore.

Dr. Danny Faulkner joined the staff of Answers in Genesis after 26 years as professor of physics and astronomy at the University of South Carolina Lancaster. He has written numerous articles in astronomical journals, and he is the author of Universe by Design.
Previous Article Misunderstood Messengers from Space Next Article Steadfast in the Midst of Scoffers