Apparently the answers that work for the winner don’t work for people who don’t currently occupy the Oval Office. To blend political cartoon caricatures with the old proverb about geese, turned upside down, we could say, “What’s good for the ‘donkeys’ isn’t good for the ‘elephants.’”1 That’s the message of the media feeding frenzy that has overtaken Florida Republican Senator Marco Rubio, someone mentioned as a possible Republican presidential candidate for 2016.

Asked about the age of the earth during an interview for GQ, Rubio offered an answer that respected the freedom of Americans. Americans have different ideas about this worldview-based issue of historical science. Rubio’s answer indicated his respect for those who accept the historical record of the Bible above the untestable speculations of those who deny God’s eyewitness account. And his answer mirrored the answer given by then-presidential-candidate Barrack Obama in 2008. Yet, ironically, the media has now characterized him (and everyone else who doesn’t step up to avow allegiance to evolutionary interpretations of earth’s history) as an unscientific ignorant rube.

Just a few months back, children’s TV host Bill Nye charismatically captured the hearts of many with his unfounded assertion that humanity’s future progress depends on today’s children embracing evolutionary fairy tales about the past. Now many in the media are tarring Rubio with the same brush they use on young earth creationists—even though he’s not made any such claims—simply because he answered the age-of-the-earth question the same way President Obama did.

At the end of the day, I think there are multiple theories out there on how the universe was created and I think this is a country where people should have the opportunity to teach them all.

Let’s have a look at their answers and compare:

GQ: How old do you think the Earth is?

Marco Rubio: I'm not a scientist, man. I can tell you what recorded history says, I can tell you what the Bible says, but I think that's a dispute amongst theologians and I think it has nothing to do with the gross domestic product or economic growth of the United States. I think the age of the universe has zero to do with how our economy is going to grow. I'm not a scientist. I don't think I'm qualified to answer a question like that. At the end of the day, I think there are multiple theories out there on how the universe was created and I think this is a country where people should have the opportunity to teach them all. I think parents should be able to teach their kids what their faith says, what science says. Whether the Earth was created in 7 days, or 7 actual eras, I'm not sure we'll ever be able to answer that. It's one of the great mysteries.2

Rolling the clock back, using the historical record, we can see how now-President Obama responded to the age-of-the-earth question. Speaking to the Compassion Forum at Grantham, Pennsylvania’s Messiah College, in 2008, Obama said:

What I’ve said to [my daughters] is that I believe that God created the universe and that the six days in the Bible may not be six days as we understand it . . . it may not be 24-hour days, and that’s what I believe. I know there’s always a debate between those who read the Bible literally and those who don’t, and that I think is a legitimate debate within the Christian community of which I’m a part. My belief is that the story that the Bible tells about God creating this magnificent Earth on which we live – that is essentially true, that is fundamentally true. Now, whether it happened exactly as we might understand it reading the text of the Bible: That, I don’t presume to know.

Though both politicians have, as we see, declined to take a firm stand on the question, media pundits—both liberal and even some conservative—have pounced on Rubio. His answer has been called “ludicrous” and his intelligence and judgment assailed. The controversy continued through the end of the week, and it included a harsh anti-Rubio opinion piece in yesterday’s New York Times by a Noble prize-winner—but whose award was in economics, not science.

Writing for Slate, journalist Daniel Engber asserts that “the age of the Earth is not a matter of opinion, but a scientific fact” and says, “If Rubio suggested otherwise, it’s because he’s uninformed or stupid.” If Mr. Engber thinks Rubio is “uninformed or stupid,” shouldn’t he assess the President’s “I don’t presume to know” as evidence of the same flaw?

Mr. Engber and those who, like him, are convinced the 4.54 billion year age of the earth is a matter of “fact” are themselves ill-informed of the difference between experimental and historical science. (See “Two Kinds of Science?” for a quick and clear video clip explaining the difference.) Despite the popularizing of evolutionary long-age notions—often using the visual image of people co-existing with dinosaurs to cement contempt and scorn for acceptance of God’s authority in the public mind—the billions-belief is based on unverifiable untestable worldview-based assumptions.

Those beliefs, among other things, assume—without proof—that all processes (geological, biological, astronomical, etc.) have proceeded at the same pace and in the same way since the universe supposedly sprang into being from nothing. Yet nothing in science can prove such claims. Experimental scientific proof demands controlled repeatable observations. The earth is already here. We cannot go back in time and observe its origins. We must rely on a historical record to understand unobservable past events. And that record of history is not readable from the rocks—it is only readable in the Bible.

Radio show host Rush Limbaugh says that the media—in an effort to derail Rubio’s potential 2016 presidential candidacy—has created “the ultimate gotcha question.” The liberal media portrays those who fail to declare faith in the secular worldview’s interpretations as “unscientific.” They’ve done it before. Limbaugh says, “Essentially what’s happening here is that Rubio is being Romneyed.” Limbaugh, pointing out that Rubio and Obama took exactly the same stand on the age of the earth, says Rubio could have safely declared, “‘I agree with President Obama. I agree with what President Obama said.’ It’s that simple, because Obama and Rubio said nothing different.” 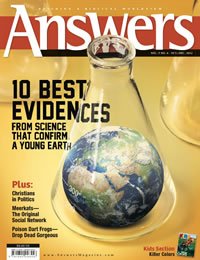 Politicians who are asked about origins should read Answers Magazine

In the controversy over Sen. Marco Rubio’s comments about the age of the earth, you need to read our current issue of Answers magazine. It presents the ten best scientific evidences that confirm the Bible’s teaching that the earth is young.

The age of the earth cannot be determined by science. But the source of ultimate truth—moral, scientific, theological, and historical—in all areas it addresses is God’s Word. Rubio certainly did not jump in with those who—like us at Answers in Genesis—point out that the plain reading of Scripture is incompatible with a billions-of-years belief. But he did acknowledge the freedom of Americans to hold worldview-based beliefs about the age-of-the-earth—something that has nothing to do with observational experimental science—without being disrespected, demonized, or relegated to the ranks of the ignorant.