Radiocarbon dating adds to evidence that Egyptian antiquity was not quite so very ancient.

Though widely acknowledged as the oldest state that fits our modern concept of a unified nation, the actual age of the ancient nation of Egypt remains uncertain. Radiocarbon dating of artifacts from Egypt’s Pre-dynastic period and First Dynasty, reported September 4th in the Proceedings of the Royal Society A by Michael Dee and colleagues, suggests Egypt is younger than previously thought.

“The formation of Egypt was unique in the ancient world. It was a territorial state; a state from which the moment it formed had established borders over a territory in much the same way we think of nations today,” Dee explained. “Trying to understand what happened in human history to lead people to establish this sort of polity we felt was a gap in understanding that needed to be filled.”1

Before the mid-twentieth century, Egyptologists came up with dates for Egyptian unification ranging from 5500 BC to 2000 BC. Since then, the average date assigned has been around 3100 BC.2 Dee’s study fits with this trend.

Egypt’s ancient timeline has long been a subject of debate. Archaeologists have depended mostly on fragmentary historical records and pottery types. Pottery produces a poor timeline, however. Classification schemes are subjective, and variations among dig sites may not reflect progress through time.

Today secular and biblical experts acknowledge that “traditional” Egyptian chronology is a muddle. Egyptologist Flinders Petrie (1853–1942) in 1899 developed the system of dating dependent on pottery styles.3 He proposed that Menes (aka Narmer, according to many authorities) ruled over a unified Egypt in 5500 BC.4 Egyptologist James Henry Breasted (1865-1935) dates Egypt’s unification under Menes to 3400 BC.5 In Centuries of Darkness, Peter James calls traditional chronology a “gigantic academic blunder.”6 Popular Egyptologist David Rohl writes, “The only real solution to the archaeological problems which have been created is to pull down the whole structure and start again, reconstructing from the foundations upward.”7

Egyptologists began to realize traditional chronology had serious issues when inconsistencies with Assyrian and Hittite discoveries surfaced. Much progress revising Egyptian chronology has come from comparisons with other ancient cultures. The new study brings radiocarbon dating to the table.

The investigators did radiocarbon testing on a few freshly excavated seeds from the Gaza Strip but primarily tested museum samples. “A lot of the stuff is not is [sic] particularly beautiful,” Dee said. “It ends up in crates in storage, but a lot of that is gold dust for radiocarbon dating.”

Dee’s team chose bits of hair and bone as well as plant-based materials like seeds from granaries, reeds from baskets,8 and linen. These samples had been assigned dates based on the usual pottery-based archaeological methods and comparison with other excavated layers (aka horizontal stratigraphy). Previously assigned dates were used to narrow the focus of each radiocarbon test, for even if all the assumptions underlying interpretation of radiocarbon tests were verifiably accurate, results are not exact.9 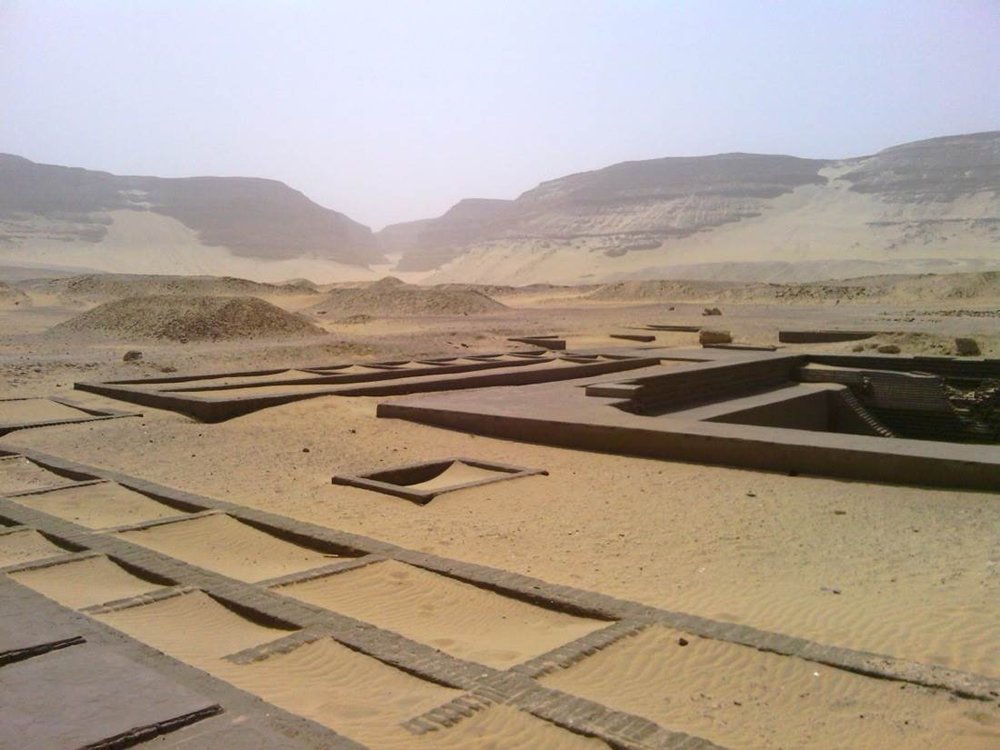 The investigators statistically compared the results of radiocarbon testing on 74 new and 112 old specimens from Egypt’s Pre-Dynastic periods and First Dynasty with all the other archaeological data collected on those materials. Samples that produced results more than 1,000 years different from those expected were excluded. No result for the Pre-Dynastic periods older than 6500 BC or more recent than 2000 BC was included.

Ignoring Egypt’s unifier Menes (aka Narmer, possibly), Aha—the first “official” pharaoh—acceded to the throne, the investigators concluded, around 3100 BC. This date is more recent than those assigned in traditional timelines of ancient Egypt but pretty much in line with the average dates obtained by more recent secular Egyptologists. As we will discuss below, however, this date is still too early to be compatible with biblical history.

Egyptian monarchs didn’t start building pyramids until the Third Dynasty, conventionally dated around 2686 BC.11 Since the focus of the study was the First Dynasty, the researchers obtained most of their regnal results from the Royal Tombs at Umm el-Qaab, the sacred burial site of Abydos. Abydos had also been Egypt’s capital until a First Dynasty pharaoh moved it north to Memphis. At Abydos, not only rulers but also many royal officials were interred. Bits of bone and hair and plant material associated with several individuals could therefore be expected to come from each monarch’s reign, helping mark out roughly how long each ruled. 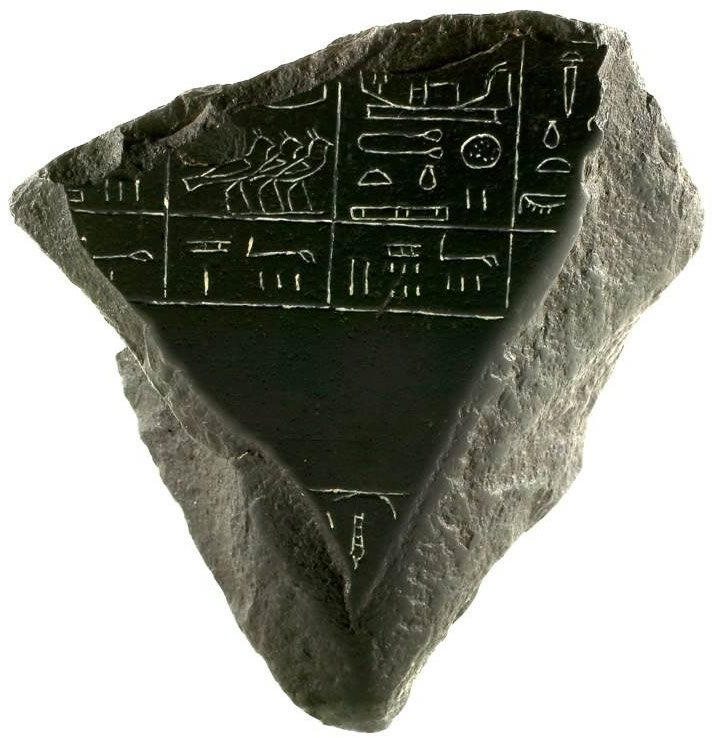 The fragmentary dynastic records recorded on the Palermo Stone, combined with other data, are used in an effort to zoom in on the actual dates of Egypt’s founding as a nation. Image from Petrie Museum, UCL, via NBC.12

The investigators assumed that all (or all but one, as Queen Merneith was possibly co-regent with her son) ruled with non-overlapping reigns.13 This is a major assumption given that much of the difficulty with Egyptian chronology has stemmed from the probability that many rulers presumed to have reigned in sequence actually ruled at the same time, perhaps regionally. By comparison with the fragmentary records of ancient Egypt, such as inscriptions on the Palermo Stone—containing some of the Royal Annals through the Fifth Dynasty—they estimated the accession dates of the reigns of eight First Dynasty monarchs.

“We got a whole lot more dates, did the model, and got the computer to work out what this means for when things actually happened,” Dee explained. “Nobody had ever done that before.”

The investigators also concluded that the Pre-Dynastic time preceding Egyptian unification was a few centuries shorter than traditionally thought. They calculated that 600 to 700 years passed between the development of agriculture in the Nile region and the First Dynasty.14

“The time period is shorter than was previously thought—about 300 or 400 years shorter,” Dee said. “Egypt was a state that emerged quickly—over that time one has immense social change. This is interesting when one compares it with other places. In Mesopotamia, for example, you have agriculture for several thousand years before you have anything like a state.”15

“The origins of Egypt began a millennium before the pyramids were built, which is why our understanding of how and why this powerful state developed is based solely on archaeological evidence,” Dee explained. “This new study provides new radiocarbon dating evidence that resets the chronology of the first dynastic rulers of Ancient Egypt and suggests Egypt formed far more rapidly than was previously thought.”16 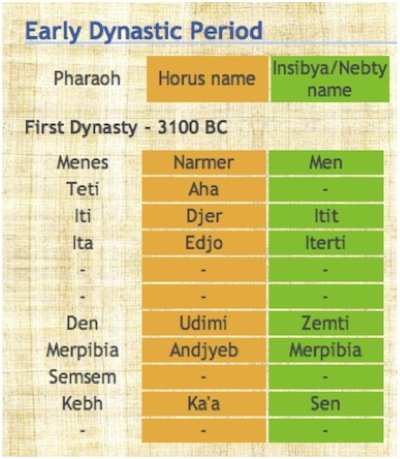 This is a portion of a chart from the Digging up the Past website, reflecting the 3100 BC date currently considered standard by many Egyptologists (though not by those at Diggings). While this date is far more recent than those assigned by many earlier Egyptologists, it is still too far back in time to reflect biblical history. The dates assigned to these ancient times depend heavily on the many assumptions used to infer them. The revised chronologies advocated by many archaeologists—by comparing Egyptian history with the histories of other ancient nations and by noting the overlap of many dynasties with one another—produce a much more recent date for the commencement of Egypt’s national history, a history that began after the dispersion from the Tower of Babel. Image copyright 2010 Kendall K. Down at Digging up the Past.17

While carbon-14 dating brings the illusion of numerical precision and scientific accuracy to the conundrums of Egyptian chronology, it is important to recognize the assumptions that can introduce bias and error into this method. In an effort to exclude spurious data, for instance, the investigators excluded data that differed substantially from the expected results. While this is ordinary procedure in controlled laboratory experiments, when dating events in the unobservable past, the assumptions by which the data is constrained can influence the results. In fact, by statistically weighing the radiocarbon results with dates already presumed to be valid, an element of circular reasoning is introduced.

If, instead, the investigators were to statistically exclude results suggesting dates older than the global Flood—documented in biblical history at around 2348 BC—they would certainly arrive at different conclusions. The investigators freely and correctly note that the assumptions by which radiocarbon dates are interpreted influence conclusions. But since they exclude a vital piece of historical data—the timeline determined by biblical history—they miss an important piece of the puzzle.

By excluding not only the time constraint imposed by the worldwide destruction during the global Flood but also the effect this global catastrophe had on earth’s biomass, the investigators’ efforts to determine “absolute dates” from radiocarbon calculations became subject to an additional source of error. Other variables such as the changing magnetic field of the earth also affect the interpretation of results. The effect of these factors on the interpretation of radiocarbon data is discussed in “A Creationist Puzzle.”

With historical information in the Bible, a few dates known from both secular and biblical history, and some simple arithmetic, we can calculate the approximate dates of many key events in history. The Flood occurred about 2348 BC and the dispersion from the Tower of Babel sometime in the centuries soon after.

Egypt was settled and founded as a nation sometime after the Flood.

While the settlement of the region we know as Egypt would have likely occurred soon after the dispersion from Babel, we cannot be sure exactly when. The fifth century BC Greek historian Herodotus learned from Egyptians he met on his travels that Egypt was originally a marsh that had to be drained. Noah’s grandson Mizraim, whose name means “embanker of the sea,” is often associated with Egypt in both the Bible and secular material. Some suspect that Mizraim, Menes, and Narmer were the same person, but the dates are still uncertain. Some biblically consistent estimates are discussed briefly in “Dating the Pyramids” and more extensively in “Doesn’t Egyptian Chronology Prove That the Bible Is Unreliable?”

What we can be dogmatic about, however, given that God’s Word provides a reliable account of history, is that Egypt was settled and founded as a nation sometime after the Flood. The Bible reports that Abraham visited an Egyptian pharaoh, and calculations put Abraham in Egypt sometime around 1900 BC, possibly during the Fourth Dynasty. Egypt’s origin as a territorial nation occurred between the global Flood and Abraham’s visit. Many Egyptologists, secular and biblical, are trying to revise Egypt’s chronology, in part by comparing the histories of ancient nations. That task is particularly difficult, however, for the world’s most ancient nations, and this study contributes to that effort. But because even the most scientifically precise conclusions about unobservable events from ancient history rely on the starting assumptions, only those timelines that consider biblical historical information will ultimately come to accurate conclusions.