Archaeologists Find Farming’s Roots All Over the Fertile Crescent

Archaeologists uncover evidence of early cultivation and crop storage throughout the Fertile Crescent.

Jericho—the city conquered by Joshua when Israel entered the Promised Land as recorded in the Old Testament—was once thought by secular archaeologists to be the site of the oldest known farming village. Thanks to several decades of excavation, archaeologists now believe that many groups of people developed agricultural capabilities about the same time at multiple locations—from Iran in the east, across the Fertile Crescent, to Turkey and Cyprus in the west. Two articles in the July 5 issue of Science—“Emergence of Agriculture in the Foothills of the Zagros Mountains of Iran” and “The Roots of Cultivation in Southwestern Asia”—summarize these discoveries. The evidence uncovered is consistent with the history presented in the Bible.

Evidence of different crops can be found at clusters of ancient settlements in Turkey, Israel, Syria, Iraq, and Iran. Storage facilities, mortars and pestles and querns for grinding, and evidence of a variety of cultivated grains—both wild and domesticated—are found at numerous excavations from the region of Israel’s Jericho to Iran’s Chogha Golan at the base of the Zagros Mountains.1 Archaeologists have also found that the daub used for construction at these sites is tempered with chaff apparently leftover from harvests of cereal grains.2

The varying styles of buildings found throughout the region as well as the differing sorts of grains cultivated, archaeologist George Willcox suggests, attest to the multiplicity of distinct cultures among the inhabitants of the Fertile Crescent.3 Yet the people who occupied these ancient sites are thought to have had contact with one another, for rare raw materials are found distributed throughout the region. These included obsidian, sea shells, bitumen, ochre, and chlorite (a stone for carving).4 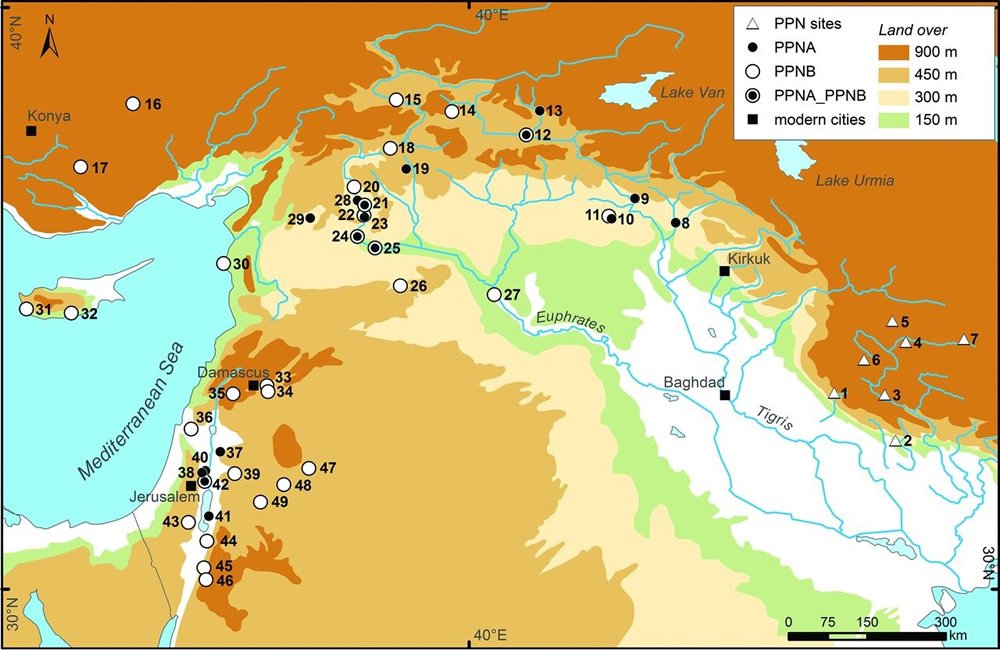 The Fertile Crescent stretching from the Persian Gulf on the east to the Mediterranean Sea on the west contains a number of archaeological sites suggesting that people in many places were cultivating crops by the end of Ice Age. Many such settlements are indicated on this map. Chogha Golan is indicated by number 1 on the east at the base of the Zagros Mountains, which along with Sheikh-e Abad (number 5) represent the most ancient known farm sites in the east. Jericho, long thought to be the sole example of ancient farming, is number 42 in the west. (“PPN” stands for “pre-pottery Neolithic.” It applies to places with evidence of ancient agriculture, with PPNB showing more evidence than PPNA of animal domestication and certain types of tools and buildings.) Image from Science.5

Chogha Golan in Iran has generated the greatest excitement not only because it represents one of the most eastward evidences of ancient farming but also because the 7.5-acre, 26-foot-deep excavation there encompasses remnants, archaeologists Simone Riehl and colleagues think, of at least 11 different occupations over time. Presumably the property and buildings of each group were destroyed or collapsed, and subsequent occupants built on top of the ruins.

The excavated levels are in some cases separated by remnants of plaster floors as well as a change in the composition of the artifacts and debris.6 However, there is no evidence of any sort of fiery destruction in the layers—a feature common to many ancient sites—and the artifacts appear to come from the same culture. So, archaeologists suspect the excavated tell (a mound formed by debris from ancient settlements) represents many generations of fairly continuous and peaceful occupation. In those layers they see evidence of steady, sequential, progressive agricultural improvements.

Chogha Golan’s deepest layers contain evidence that the inhabitants cultivated the wild forms of many food crops, including barley, wheat, lentils, and pulses. Moving upward, domesticated crops such as emmer wheat and barley appear in increasing proportion to the wild crops. Thus the layers suggest rapid progress in farming technology. Implements for grinding grain as well as stone storage containers, carved bone artifacts, and clay figures throughout the layers suggest a growing population within a single culture over time.

Radiocarbon dates suffer from inaccuracies due to the unverifiable assumptions on which they are based.

Conventional radiocarbon dating assigns a date of about 12,000 years “before present” to the deepest layer at Chogha Golan and 9,800 to the highest. The archaeologists note the oldest Chogha Golan dates are generally consistent with the oldest dates found at Sheikh-e Abad higher in the Zagros Mountains as well as those assigned to clusters of settlements all across the Fertile Crescent. The deepest layers of most of these settlements correspond to the late Pleistocene period and therefore likely represent agricultural success at the end of the Ice Age and into the post-Ice Age years.

Radiocarbon dates suffer from inaccuracies due to the unverifiable assumptions on which they are based. These dates often appear inflated when compared with the historical record in the Bible. (Inflated dates likely result from several causes, including the dramatic change in the biomass of the earth following the global Flood.) Based on the biblical historical record, the earth and all forms of life were created only about 6,000 years ago. The catastrophic global Flood remodeled the surface of the earth around 1,700 years later, so archaeological records of the pre-Flood farming and civilization that the Bible describes are naturally non-existent. The biblical timeframe for these settlements is post-Babel. The Ice Age after the Flood likely peaked well after the events at Babel.

“The whole process, from cultivating wild precursor species to cultivating domesticated plants, took 1,000 to 2,000 years at Chogha Golan,” archaeologist Riehl says. “There was no single core area where everything started, but rather regions where domestication of plant species began more or less independently.” This makes sense in light of the Scriptures. As people migrated from Babel, they would have taken some knowledge of farming and cultivation with them and then developed it further, often somewhat independently. The archaeological evidence that ancient cultures were involved in trade with each other also supports the additional possibility of trade in agricultural technology and even seeds.

Hunter-Gatherers Did Not Precede Farmers

Riehl and colleagues write, “Domesticated species evolved through management of their wild progenitors, thus identification of pre-domestication cultivation or management of phenotypically wild species is required to provide the crucial link made between gathering wild cereals and cultivating domesticated species. Knowledge of this process is essential for our understanding of how hunter-gatherers evolved into farmers.”7

Of course, since “evolution” is supposed to be a random, undirected process, the comment that “domesticated species evolved” is somewhat oxymoronic. The human beings who cultivated the wild plants as crops and domesticated wild plants to better meet their needs were obviously intelligent people. In fact, archaeologist George Willcox notes that the various ancient settlements scattered throughout the Fertile Crescent lack clear evidence to distinguish between the traditional evolutionary classifications of primitive man as foraging “hunter-gatherers” and the more advanced farmers who tilled the ground.8

Evolutionary anthropologists generally consider the “hunter-gatherer” to be the more “primitive” condition of evolving humanity.9 Because farming requires considerable planning and understanding of abstract concepts about plant reproduction, the weather, the soil, and so forth, agriculture is generally viewed as a more advanced evolutionary state unachievable until primitive humans evolved higher thinking.

The Bible reveals a different history. After the global Flood, farming began right away, when Noah planted a vineyard (Genesis 9:20). Hunting would not have begun right away, of course, since the precious cargo of animals aboard the Ark had been preserved to replenish the earth. The first hunter mentioned in the Bible was Nimrod (Genesis 10:9), Noah’s great grandson. Hunting and gathering likely became a prominent part of many cultures as people went to various parts of the world, lost agricultural expertise, and had to regain it. Often it is easier to survive as hunters and gatherers in an undeveloped land before establishing an agricultural base. There is certainly no biblical reason to suppose that either the farmer or the hunter-gatherer would be the intellectual superior of the other!

Biblical history is consistent with the findings in the Fertile Crescent, apart from the erroneous radiocarbon dates. God’s Word documents that mankind was intelligent and capable of taming his environment from the beginning. Scripture also explains why the region of the Fertile Crescent would have evidence of multiple groups of culturally distinct societies who understood how to grow food crops and domesticate them. We would expect to see these sorts of archaeological findings in the wake of the global Flood, the dispersal of people from the Tower of Babel, and the Ice Age. After all, people had to build new civilizations from the ground up using the resources at hand.

Not only did farming appear shortly after the Flood, but farming was also part of man’s life from the beginning. Adam originally was to tend the garden provided by God (Genesis 2:15). God later proclaimed that Adam’s agricultural efforts in the sin-cursed world would be fraught with laborious toil (Genesis 3:17–19). Adam’s sons kept flocks and tilled the ground (Genesis 4:2). Genesis 4 further records the establishment of a city, the beginnings of a nomadic lifestyle with animal husbandry, and progress in metallurgy and music—all within just a few generations of the creation of man.

Thus, biblical history documents human intelligence, ingenuity, civilization, and the ability to tame and shape the environment to meet human needs from the beginning. Mankind did not have to evolve these abilities. Noah’s family would have certainly preserved a substantial portion of mankind’s knowledge through the Flood, and that knowledge would have facilitated the efforts of Noah’s descendants to build a unified civilization on the plain of Shinar around the Tower of Babel. Thus, the fact that the Fertile Crescent’s last Ice Age sediments contain evidence of many different cultures grinding and storing grain, as well as cultivating and domesticating wild plants, is completely consistent with biblical history.