Powerless Primordial Soup is Dead in the Water

Without power, the primordial show is over before it starts.

How could life randomly emerge from non-living elements? That would, after all, be the necessary first step in a molecules-to-man evolutionary scenario. In their endless quest for the keys of such abiogenesis, scientists often look for self-replicating molecules that could potentially carry simple coded information. (We’ve discussed many of these proposed stand-ins for DNA and pointed out a number of problems, as detailed in the articles linked below.) But another show-stopper for abiogenesis—a process never observed in biology, by the way—would be a lack of power. Without a usable source of energy, a biological battery of sorts, living cells could never do the things living cells do. 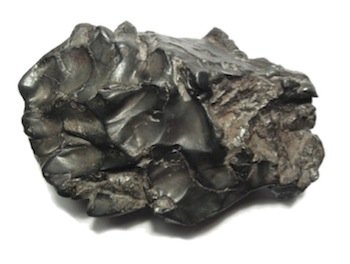 This is a piece of the Sikhote-Alin meteorite that hit Siberia in 1947. It contains an iron-nickel-phosphorus mineral called schreibersite. Many evolutionary scientists think that meteorites brought the chemical components needed for life to evolve to the early earth. Image: SikhoteAlinMeteorite.jpg: Vesta and Crisco 1492 through Wikipedia.org

Real living cells contain several energy-transferring molecules that allow them to store and efficiently transfer energy to power all of life’s metabolic processes. ATP is the high-energy molecule most people have heard of. Using a complex array of enzymes, cells harness the energy obtained from catabolizing (breaking down) their fuel source (like glucose sugar). They then store that energy in the high-energy phosphate bonds on ATP. The process is akin to charging a battery, though far more complex. When that stored “bond energy” is needed, the bond is broken and the energy used. The molecule is then recharged. ATP is the ultimate rechargeable battery.

But as University of Leeds chemist Dr. Terry Kee points out, complex enzymes to charge up ATP, or even ATP itself for that matter, would not have been around on the sort of early earth evolutionary scientists imagine existed before the supposed evolution of life. Evolutionists, like Kee, often accept the notion that meteorites delivered the chemicals needed to build cells but puzzle about the source of life’s energetic spark. Kee believes he’s taken a step toward solving that problem by looking for simpler molecules that could stand in for ATP’s vital role until random processes got around to building ATP.

“The mystery of how living organisms sprung out of lifeless rock has long puzzled scientists, but we think that the unusual phosphorus chemicals we found could be a precursor to the batteries that now power all life on Earth,” says Kee. “But the fact that it developed simply, in conditions similar to the early Earth, suggests this could be the missing link between geology and biology.”

Meteorites were the key, Kee thinks, not only to supplying the chemical seeds of life but also the chemical spark. The important element to look for—since it works so well in ATP—is phosphorous. (That’s the “P” in ATP, which stands for adenosine triphosphate, because it has 3 (“tri”) phosphorus-containing “phosphate” complexes attached by high-energy bonds to each molecule.)

Imagining a volcanically active early earth, Kee’s team simulated the results of meteorites containing the iron-nickel-phosphorus mineral schreibersite landing in hot acidic geothermal pools. They did this by plunking pieces of the Sikhote-Alin meteorite that hit Siberia in 1947 into acidic water from Iceland’s Hveradalur geothermal region. They anticipated that the phosphorus in the meteoritic mineral would corrode in the acid to produce the sort of phosphorus normally present in ATP cellular chemistry.1

They left the mineral incubating in the geothermal pool’s heat for four days and then let it cool for a month at room temperature. The resulting solution contained pyrophosphite, a phosphorus-containing molecule similar to the pyrophosphate that participates in ATP energy-transferring reactions. Kee and colleagues believe this could have been the key to “chemical life.” 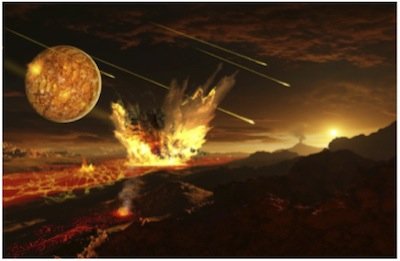 Artist’s conception of an early volcanic earth being bombarded by meteorites delivering phosphorus-rich minerals and other chemical seeds of life. An artist’s conception, however imaginative, is not an eyewitness account. The Bible’s opening chapter in Genesis provides God’s eyewitness account of earth’s true “early” nature and the real origin of life. Image: spaceart1.ning.com through motherboard.vice.com

Hveradalur geothermal area in Iceland’s Kerlingarfjöll mountains was the site of recent experiments to see whether bits of a phosphorus-containing meteoritic mineral would chemically react in the hot geothermal waters to produce the sort of phosphorus-containing molecule commonly found in living cells. Image: Click on map center thumbnail for a photograph by plgrenon of this beautiful area, selected for Google Earth, through www.panoramio.com/photo/76710501.

“Chemical life would have been the intermediary step between inorganic rock and the very first living biological cell,” Kee says. “You could think of chemical life as a machine—a robot, for example, is capable of moving and reacting to surroundings, but it is not alive. With the aid of these primitive batteries, chemicals became organised in such a way as to be capable of more complex behaviour and would have eventually developed into the living biological structures we see today.”

And since the Mars rover Curiosity has found phosphorus on Mars, Kee adds, “If Curiosity has found phosphorus in one of the forms we produced in Iceland, this may indicate that conditions on Mars were at one point suitable for the development of life in much the same way we now believe it developed on Earth.” Meanwhile, Kee’s team will travel to Greenland’s Disko Island to repeat the experiment with the earth’s only natural source of schreibersite mineral and will also explore scenarios by which their “geological fuel cell” could have been integrated into primordial biology.

Of course, figuring out how spontaneous chemical reactions that generate energy-containing molecules could be harnessed by other non-living molecules in a random, chaotic mixture to organize themselves into increasingly complex, information-carrying, functional, purposeful units is a far cry from dropping pieces of a meteorite into a geothermal pool. (Hats off to Kee’s team though; they chose an incredibly scenic location for their experiment. If you’re going to investigate how an impossible thing could happen, you might as well do it someplace pretty. After a look at the beautiful photo embedded in the illustration from Google Earth, you may plan a trip yourself!)

Operational, experimental science has never demonstrated life randomly evolving from non-living elements. In fact, such an occurrence would violate the most fundamental observable law of biology: life comes from life, not from non-life.

The Bible records God’s eyewitness account that He created all things, including the world and all the living things in it. He did so over the course of six literal days, and He spoke the components of the original creation into existence. He did not require a care package of meteoritic minerals or hot volcanic pools, nor did He choose to wait for one living thing to evolve into another. In fact, the world He describes in the first chapter of Genesis was not a molten volcanic version of the Star Wars planet Mustafar2 but a place prepared to receive the life He was about to create. And beginning on the fifth day of earth’s existence, He created living things to reproduce after their kinds.

Nothing ever observed by scientists violates any of God’s report concerning our origins. The biblical account of our origins and the subsequent problems after sin’s curse affected the world are also consistent with the way we see the world work in science. Kee’s work is an elegant bit of chemistry, but it provides no information to explain how life could have come into existence without a Creator.