“Lizard overlords”?1 “Alien dinosaur chemists”?2 April Fools is over, and you’re not having a flashback to Star Trek: Voyager’s much-maligned episode “Distant Origin,” which features the famous line, “That creature napping in sick-bay is a dinosaur.”3 These eye-catching headlines actually got their start with a press release announcing Dr. Ronald Breslow’s latest article in the prestigious Journal of the American Chemical Society. The press release asked, “Could ‘advanced’ dinosaurs rule other planets?” It described Breslow’s efforts to explain the chemical origins of life but only after grabbing media attention by stating, “New scientific research raises the possibility that advanced versions of T. rex and other dinosaurs — monstrous creatures with the intelligence and cunning of humans — may be the life forms that evolved on other planets in the universe.”4

Not to be missed in the official release was the stock dinosaur photo and Breslow’s conclusion—admittedly the only mention of dinosaurs in his article:

An implication from this work is that elsewhere in the universe there could be life forms based on D-amino acids and L-sugars. Such life forms could well be advanced versions of dinosaurs, if mammals did not have the good fortune to have the dinosaurs wiped out by an asteroidal collision, as on Earth. We would be better off not meeting them. 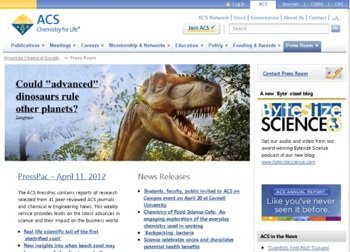 Some comments on the web have implied the ACS press-officer is clueless for not realizing Breslow’s research really has nothing to do with dinosaurs. Others consider that individual brilliant for generating enormous publicity on a mundane topic the public would have otherwise ignored. As one reader of Smithsonian Magazine’s “Dinosaur Tracking” column wrote, “I feel a bit sorry for Breslow – what he probably saw as a throwaway line to finish off the paper and maybe make people stop and think for a moment was turned into the central theme of the press release by a press-officer. Still, it has got him far more publicity than he could possibly have otherwise . . . actually, now I don’t feel sorry for him at all and I want to hire his press officer!”5

And what about Breslow? Not surprisingly, cyber-comments have also ranged from those recognizing Breslow’s conclusion as “a silly piece of fluff meant to close an otherwise esoteric piece on a humorous note”6 to remarks disparaging his research and insulting his age. (Breslow, 81, a recipient of many professional awards, is a professor of chemistry at Columbia University and a past president of the American Chemical Society.)7

We hesitate to put words in the professor’s mouth, so we’ll let him speak for himself. Breslow explained in an e-mail to the HuffingtonPost, “Mammals survived and became us only because the dinosaurs were wiped out by an asteroid, so on a planet similar to ours without the asteroid collision it is unlikely that human types would be there, more probably advanced lizards (dinosaurs). . . . I just warn that they might well see us as food.”8

Not surprisingly, many evolutionists—eager to either rescue the reputation of evolutionary thinking or correct Breslow’s implications that evolution must follow destined paths of probability—responded quickly. Outspoken evolutionist PZ Myers wrote, “There is no reason to imaging [sic] that a saurian-mammalian transition is anything but a particular quirk of our particular planet’s evolutionary history—it is not a universal” and called Breslow’s paper “badly written nonsense.”9

Breslow’s research addressed the question of how life on earth got the right building blocks to evolve. Biochemical processes require specific mirror image forms of molecules to function. (This is called homochirality. Chiral means “mirror image.”) Many molecular structures can exist in mirror-image forms, and when randomly formed by non-living things, the laws of probability result in an equal number of both left-handed (L) and right-handed (D) molecules. Breslow writes, “For life to start on earth and elsewhere, it is critical that the building blocks—amino acids and sugars—be in predominant homochiral form.”10 He then noted that amino acids found in the Murchison meteorite (Australia, 1969) did not have an equal balance of the mirrored forms. He suggests the unexplained preponderance of “right circularly polarized light in this sector of the universe”11 may have irradiated amino acids on ancient meteorites, selectively destroyed certain mirror image forms, and left the remainder to seed the earth with the building blocks of life. His paper described how laboratory reactions begun with homochiral molecules produce homochiral products. The implication is therefore that prebiotic chemistry begun with homochiral building blocks could have perpetuated itself and built the biochemical world we know.

To say that there are dinosaurs on alien worlds presupposes that there is an irresistible direction that all life follows, and that dinosaurs are . . . inevitable actors in the drawn-out drama. There is no evidence that this is so.

Without taking issue with Breslow’s actual research, Brian Switek, who wrote the Smithsonian Magazine’s “Dinosaurs From Space!” column, joins the chorus of correctors to point out that while the Permian and Triassic mass extinctions “drastically shaped evolutionary history,” the course of evolution is random. Switek asks, “Why on earth would we expect such patterns to be played out in just the right sequence on another planet? To say that there are dinosaurs on alien worlds presupposes that there is an irresistible direction that all life follows, and that dinosaurs are . . . inevitable actors in the drawn-out drama. There is no evidence that this is so.”

Actually, Dr. Breslow does not claim to have evidence. He does not claim his prebiotic scenario happened. Breslow explains, “Of course showing that it could have happened this way is not the same as showing that it did. Proper theories need the possibility of falsification.”12 Acknowledging that even with the proper building blocks evolutionists have no way to explain the chemical leap into life, Breslow writes, “Finally, of course, we all need ways in which these and other sensible building blocks could assemble into structures with the exciting properties of life.”13

So while evolutionists scramble to explain away Dr. Breslow’s sci-fi savvy conclusion as a senior moment, we will focus on the implications of his other conclusions. Evolutionary notions about the chemical origins of life are completely non-falsifiable. Why? Life already exists. The origin of life is in the unobservable past. Those origins cannot be subjected to the observable, repeatable testing required for confirmation or falsification of scientific theories and hypotheses. Furthermore, nothing in nature has ever demonstrated a way—as Breslow confirms—for life to randomly emerge from non-living chemicals. Biology continues to confirm the law of biogenesis: life comes from life. Why therefore should evolutionary scientists cling to the idea that life once appeared from prebiotic chemicals? Only because of a determination to ignore the only eyewitness account of the origin of life: God’s account in Genesis.