Looking for Water in all the Right Places

Early Mars missions failed to find life on the Red Planet, so the focus shifted to finding evidence for water.

As high resolution photographs taken by orbital reconnaissance craft and rovers such as Opportunity showed evidence that Mars may have once had liquid water, the effort to look for evidence of life the water may have spawned has intensified. After all, we could sum up an article of evolutionary faith with the statement, “And the water ‘said,’ let there be life.”

Recent research has suggested that Mars may actually be a fairly target-rich environment as the search for the past presence of water and associated evidence of past life go on. For instance, in January a Brown University team published an analysis of Mars Reconnaissance Orbiter photographs of two heavily cratered regions. They suggest ridges visible in the photos were likely formed by water flowing beneath the surface. “This gives us a point of observation to say there was enough fracturing and fluid flow in the crust to sustain at least a regionally viable subsurface hydrology,” Lee Saper said of his analysis. “The overarching theme of NASA’s planetary exploration has been to follow the water. So if in fact these fractures that turned into these ridges were flowing with hydrothermal fluid, they could have been a viable biosphere.”1

McLaughlin Crater is another likely candidate, according to geochemist John Parnell and planetary geologist Joseph Michalski. In a paper also published in January, they point out that craters are probably the most promising places to search. In craters the meteorites have already done the work of drilling deeply into the Martian surface, sometimes tossing rocks that may have been affected by subsurface water into the bottom of the hole. Like the Brown University team, Parnell and Michalski have examined high-resolution photographs. They report evidence of geologic layers and debris flow that are strong evidence, in their estimation, of “groundwater upwelling.” They therefore recommend McLaughlin Crater as a future high priority destination for direct examination.2

Detailed orbital photographs like these, according to an analysis published in Nature Geoscience, show layers, debris flows, and minerals thought to be clays and carbonates, all interpreted as evidence of previous upwelling of groundwater. Debris likely ejected upon impact from nearby Karen Crater, scientists believe, is now resting in the bottom of McLaughlin Crater and may preserve evidence of organic molecules or even subsurface microbes. Authors of the analysis are hoping these areas will someday be directly explored. Image credit: J. Michalski et al., “Groundwater activity on Mars and implications for a deep biosphere.” Nature Geoscience (published online 20 January 2013) www.nature.com

“We could be so close to discovering if there is, or was, life on Mars,” says Parnell. “We know from studies that a substantial proportion of all life on Earth is also in the subsurface and by studying the McLaughlin Crater we can see similar conditions beneath the surface of Mars thanks to observations on the rocks brought up by the meteorite strike. There can be no life on the surface of Mars because it is bathed in radiation and it's completely frozen. However, life in the sub surface would be protected from that. And there is no reason why there isn't bacteria or other microbes that were or still are living in the small cracks well below the surface of Mars.”3

This chart presents a comparative timeline of supposed evolutionary events on Mars (top) and earth (below). Evolutionists believe, without scientific support, that Mars was habitable at the time the earliest life evolved on earth and subsequently “became hyperarid, extremely oxidized, and inhospitable before the evolution of photosynthesis or eukaryotic life on Earth.” Due to the uninhabitable conditions on Mars, the best place to look for evidence of microbial life, past or present, is below the surface. However, the evolutionary scenario depicted above is built on a host of unverifiable assumptions. Image credit: J. Michalski et al., “Groundwater activity on Mars and implications for a deep biosphere.” Nature Geoscience (published online 20 January 2013) http://www.nature.com/ngeo/journal/v6/n2/full/ngeo1706.html.

Meanwhile, Mars rover Curiosity has reached the lowest point in Gale Crater and is about to begin drilling. Detouring temporarily from the planned visit to examine sedimentary rocks at the base of Mount Sharp, the rover’s earth-bound support team considers the site, called Yellowknife Bay, a “candy store” of targets. They expect to find a variety of hydrated minerals—minerals that have incorporated water molecules within their chemical structure. Preliminary investigations have revealed mineral-filled veins that are ordinarily only deposited by underground water. 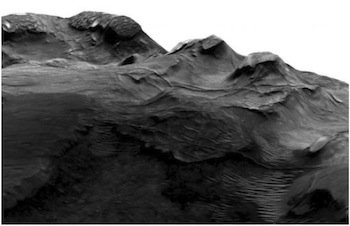 The pipe-like ridges seen in this image of a Martian impact crater in the Nilosyrtis region suggest subsurface water flow at some time in the past, analysts from Brown University say. Image credit: NASA Mars Reconnaissance Orbiter through news.brown.edu 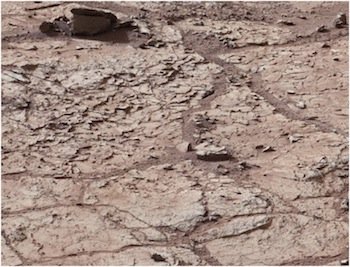 Yellowknife Bay, the lowest elevation in Gale Crater, looks like a promising drilling site for the Mars rover Curiosity. Fissures and mineral-filled veins suggests past action of underground water. NASA scientists hope to find definitive geochemical evidence of a wet Martian past and perhaps some biochemical evidence that life, even subsurface life, once existed. Evolutionists believe that life could evolve in the prolonged presence of liquid water, even though science has never demonstrated any way life could randomly evolve from non-living elements. Image credit: MSSS/Caltech/NASA through news.nationalgeographic.com

The likelihood that Mars once had a different environment allowing the presence of liquid water does nothing to support the idea that our solar system formed billions of years ago. The belief that life evolved on earth is also based on unverifiable assumptions. If evidence of microbial life—past or present—on Mars is eventually found, evolutionists will of course claim that life proves evolution happened. But in reality, such a finding would simply be evidence that life is (or once was) there, not a demonstration of that life’s origins. The Bible does not say whether God created life on any other planets, but the Bible does tell us God created all life on earth during the first six days of Creation week, the same week in which He created the rest of the universe, about 6,000 years ago. Discovery of evidence of water and even life on Mars would not disprove or undermine that biblical truth.