Evidence of water in Martian meteorite suggests a wet past for the Red Planet.

A meteorite thought to have originated from Mars has proportionally more “indigenous water”1 than other meteorites that have been analyzed. Scientists speculate the meteorite is evidence that the Red Planet had a warm, wet past. 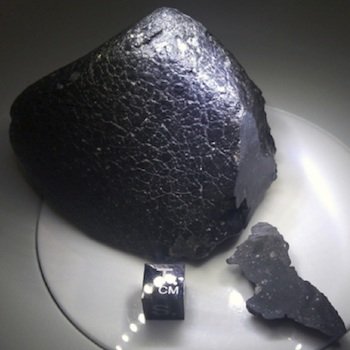 This eleven-ounce fist-sized meteorite contains a higher concentration of molecular water than other meteorites thought to have come from Mars. The meteorite is a conglomerate of basalt, feldspar, and pyroxene. Water is thought to have been incorporated into it when the magma that produced its volcanic components was cooling.Researchers believe the meteorite is evidence that Mars had a wetter past than previously thought. (The reference cube is a centimeter on each side.) Image by Carl Agee, via Science.2

The fist-sized meteorite nicknamed “Black Beauty”—aka Northwest Africa (NWA) 7034—was bought in Morocco in 2011. Like the Shergotty, Nakhla, and Chassigny (SNC) meteorites, also thought to have come from Mars, it contains macromolecular organic carbon, but its composition differs enough to consider it in a class by itself. Importantly, Black Beauty’s composition is consistent with the chemical composition of surface rocks and outcrops on Mars as assessed by NASA’s Mars Exploration Rovers and the Mars Odyssey Orbiter. Black Beauty’s geochemistry is a much better match for the Martian crust than the 110 known SNC meteorites.

“The texture of the NWA meteorite is not like any of the SNC meteorites,” says Andrew Steele, who led the carbon analysis at the Carnegie Institution's Geophysical Laboratory. “This is an exciting measurement in Mars and planetary science. We now have more context than ever before to understanding where they may come from.”

“The contents of this meteorite may challenge many long held notions about Martian geology,” adds John Grunsfeld of NASA's Science Mission Directorate. “These findings also present an important reference frame for the Curiosity rover as it searches for reduced organics in the minerals exposed in the bedrock of Gale Crater.”

The concentration of molecular water in the rock is about 6000 parts per million, which is 10 to 30 times that found in other suspected Martian meteorites. It is unlikely that the water in the meteorite was acquired as an earthly contaminant, for the oxygen isotopes are not in the same proportions as that normally seen on earth. The meteorite is a conglomerate with volcanic components, so researchers suspect that Martian ground water was incorporated into its minerals as it cooled.

Researchers interpret radiometric measurements of the meteorite to mean its volcanic components solidified 2.1 billions years ago. Those interpretations are based on the same unverifiable worldview-based assumptions as such measurements on earth rocks. (See below to learn more about this.) In relative terms, the NASA researchers studying the meteorite believe it to be older than other meteorites they have studied.

“This Martian meteorite has everything in its composition that you'd want in order to further our understanding of the Red Planet,” explains Carl Agee of University of New Mexico's Institute of Meteoritics in Albuquerque. “This unique meteorite tells us what volcanism was like on Mars 2 billion years ago. It also gives us a glimpse of ancient surface and environmental conditions on Mars that no other meteorite has ever offered.”

Knowing that Mars may have once had a wetter composition gives many evolutionary researchers hope that Martian research will discover evidence that life evolved there.

Knowing that Mars may have once had a wetter composition gives many evolutionary researchers hope that Martian research will discover evidence that life evolved there. After all, one of the main goals for the expensive Curiosity mission is to look once again for evidence of such life. Evolutionists believe that life could well have evolved in any environment where the habitable conditions include liquid water. But would finding evidence of past life on Mars demonstrate it evolved? No. Conditions on Mars may well have not always been what they are today, but that possibility does not mean life could evolve there—or anywhere else.

Even on earth, there is no known mechanism by which life could have evolved from nonliving elements, nor any evidence that it did. Evolutionists eager to explain the existence of life apart from a Creator simply assume that, in violation of the observable laws of biology, life with the vast array of complex information present in even the simplest life forms evolved through natural random processes. Thus, if evidence of past life on Mars were to be found, it would in no way support the concept of molecules-to-man evolution.

Previous Article News to Note, January 5, 2013 Next Article Semantics Matter: What Does the Pill Do?