The Mars rover Curiosity made history on February 8 by drilling 2 ½ inches into the Martian surface—deeper than any robot there has previously drilled—and this week NASA announced the results of the analysis of the material it dug up. The arm-mounted hammering drill obtained about a tablespoon of gray powdered rock from the John Klein outcrop. NASA officials announced at a press conference Tuesday that the powder “shows ancient Mars could have supported living microbes.” Michael Meyer, who leads the Mars Exploration Program, says, “A fundamental question for this mission is whether Mars could have supported a habitable environment. From what we know now, the answer is yes.”

Analysis shows the material contains fine-grained clay consistent with previous exposure to non-acidic, non-salty water. Other Mars rovers, Spirit and Opportunity, had found evidence of previous exposure to liquid water under acidic or salty conditions unfavorable to life. “We have found a habitable environment that is so benign and supportive of life that probably — if this water was around and you had been on the planet, you would have been able to drink it,” says Curiosity chief scientist John Grotzinger, who adds that it is not known how long ago this liquid water was present. 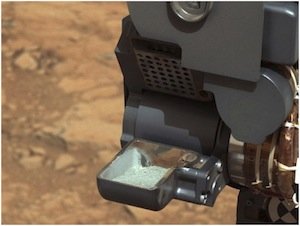 Here’s the scoop! Curiosity’s first scoop of powdered rock from its first drilling foray on Mars, that is. Curiosity’s hammering drill has produced about a tablespoonful of gray gritty material. NASA’s remote analysis reveals a number of chemicals found in living organisms but no complex organic compounds nor any direct evidence of life, past or present. Image credit: NASA/JPL-Caltech/MSSS through www.space.com 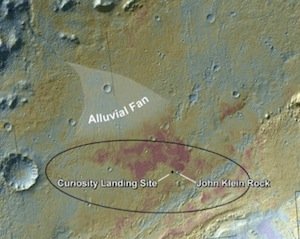 Curiosity drilled to a depth of 2 ½ inches at John Klein Rock. Analysis of the sample reveals clay minerals consistent with past exposure to water, apparently not as acidic or salty as that suggested by samples obtained from other regions by other Martian rovers. Image credit: NASA/JPL-Caltech/ASU through www.space.com

“The range of chemical ingredients we have identified in the sample is impressive, and it suggests pairings such as sulfates and sulfides that indicate a possible chemical energy source for micro-organisms,”

“The range of chemical ingredients we have identified in the sample is impressive, and it suggests pairings such as sulfates and sulfides that indicate a possible chemical energy source for micro-organisms,” explains Paul Mahaffy, the principal “Sample Analysis at Mars” (SAM) investigator at Goddard Space Flight Center. Grotzinger explains, “What we have learned in the last 20 years of modern microbiology is that very primitive organisms, they can derive energy just by feeding on rocks.”1

Elements in the sample include sulfur, nitrogen, hydrogen, oxygen, phosphorus and carbon.2 These common elements are found in living organisms, NASA officials pointed out in their announcement. Two simple carbon-containing compounds (chloromethane and dichloromethane) have also been found, but there is a question of whether they are residual contaminants and await confirmation. No complex organic molecules, such as amino acids from which proteins are built, have been found, though even those would not be definitive evidence that life ever existed on Mars, since such compounds are also found in the absence of life.

The scientists hasten to point out that no evidence of life, past or present, has actually been found. Furthermore, the equipment on Curiosity is not designed to detect living organisms.

So why all the excitement? As we’ve discussed recently (Secret of Epigenetic Inheritance Discovered), it is an article of faith among evolutionists that given liquid water, a few chemicals, and sufficient time, life can evolve through natural processes. Yet even on earth where we can make much more direct and abundant observations, no evidence that life can evolve from non-living substrates through random natural processes has ever been found. And the likelihood that the Martian environment may have once been different than it is today does not demonstrate that the solar system formed billions of years ago.

If evidence of microbial life—past or present—on Mars is eventually found, evolutionists will of course claim such life as evidence for evolution. But in reality, such a finding would simply be evidence that life is (or once was) there, not proof of that life’s origins. The Bible does not say whether God created any life on other planets, but the Bible does tell us God created all life on earth during the first six days of Creation week, the same week in which He created the rest of the universe, about 6,000 years ago. Discovery of evidence that a “habitable” environment containing liquid water once existed on Mars or even life itself would neither disprove nor undermine biblical truth.