Ever since the discovery of tiny human skeletons in Liang Bua cave on the Indonesian island of Flores a decade ago, anthropologists have debated their origins. Found with advanced cutting tools and the charred remnants of dwarf elephant bones, the Homo floresiensis —nicknamed “hobbits”—were clearly human. But their remarkably small brain size—estimated at around 400 cubic centimeters (cc), in the same neighborhood as a chimpanzee’s—has baffled scientists. And where did such small people come from? 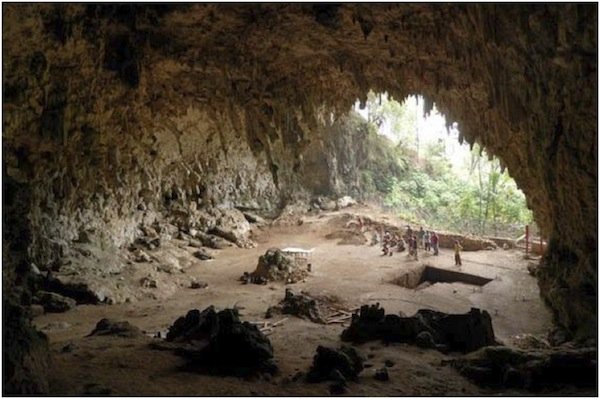 This is Liang Bua cave on the Indonesian island of Flores. Skeletons of tiny people now known as Homo floresiensis found here in 2003 have puzzled anthropologists searching for their origins. Image by FunkMonk, via Wikipedia Commons.

Theories have abounded but all seemed unsatisfactory. Some have suggested the ancient hobbits of Flores suffered from microcephaly (cretinism) due to severe thyroid disease, but such microcephaly is associated with severe mental retardation. Such a condition would have precluded the manufacture of advanced cutting tools and their ability to hunt successfully as demonstrated by the artifacts in the hobbits’ cave. Some anthropologists have suggested Homo floresiensis descended from Homo erectus or Homo habilis. Some have even suggested hobbits had a close relationship to small-brained australopithecine apes.1

Homo habilis is thought to have had a small brain size, around 600 cc, but no evidence of H. habilis has ever been found in Asia. Incidentally, such estimates for H. habilis are highly suspect, as the fossil record for H. habilis consists of a fragmentary collection that likely contains portions of some ape material mixed with fossils of extinct humans. Thus its small cranial capacity lends spurious support to evolutionary claims about gradual human evolution from small-brained ancestors. 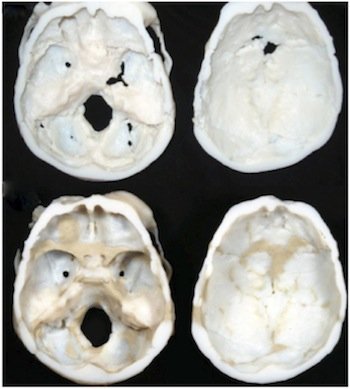 This replica of the one intact Homo floresiensis skull from Liang Bua cave is shown before (top) and after (below) it was cleaned of debris and carefully reconstructed with clay prior to high-resolution CT scanning. Its cranial capacity was 426 cc. Image by Daisuke Kubo et al., via Proc. R. Soc. B.2

Homo erectus fossils, which have been found in Asia, average nearly 1,000 cc cranial capacity. This is substantially smaller than the 1,300 cc typical of modern humans. But a brain size reduction in descendants from 1,000 cc to 400 cc, according to many evolutionary anthropologists, is a greater drop than their models suggest is possible.

Paleoanthropologist Yousuke Kaifu of Japan’s National Museum of Nature and Science has re-examined the one intact skull found among the hobbit remains and discovered that Homo erectus ancestry is actually a possibility. After cleaning space-occupying debris from inside the skull and carefully reconstructing its missing details, Kaifu’s team used a high resolution micro-CT scan to precisely measure its cranial capacity. Kaifu found the size was a bit larger than previous estimates—426 cc.

It is no surprise that 3 ¼ foot tall, 55 pound people had brains much smaller than the 1,300 cc average for typical modern humans. But could Homo erectus, an extinct variety of human—considered by evolutionists to be the earliest undisputed form of humans—be ancestral to Homo floresiensis? (Of course, knowing from biblical history that all human beings descended from Adam and Eve, we have no doubt about it! These people descended from Adam and Eve just as we did. But the evolutionary community has been skeptical, even allowing a million or so years for the process!)

Kaifu’s team correlated brain and body sizes from twenty populations worldwide. Their models demonstrated that brain and body size are closely correlated and that dramatic down-scaling of brain and body size is possible. And though the jump from 1,000 to 426 cc is still a bit beyond the possibilities suggested by their model, one variety of Homo erectus from nearby Java had a significantly smaller cranial capacity—about 860 cc. That ancestral brain size works in Kaifu’s model.

“This study does not prove who was the actual ancestral species for Homo floresiensis, but it has removed the most important concern for the model,” Kaifu explains, namely the idea that the difference in brain size was too extreme. Because the hobbits’ legs were “short relative to their arms and feet,” Kaifu says, some scientists still think the hobbits came from more primitive ancestors than Homo erectus.3 For instance, Chris Springer of London’s Natural History Museum says, “Personally I don't think it solves the problem. There are primitive features in the skeleton of floresiensis which for me suggests that it comes from quite a primitive form of human: one that may have been around two million years ago rather than one million years ago. It is a fascinating find because it shows that human evolution took a number of twists and turns. It isn't just about the evolution of us modern humans, but actually there are lots of other species around. Floresiensis was a failed experiment that lasted to within the last 50,000 years or so, and we are the last survivors of all these other experiments in evolving humans.”4

Regardless of whether Homo erectus was the hobbit ancestor or not, there is no need to invoke any sort of million-year experiment in human evolution to understand that a small isolated population of humans could develop some unusual traits through the ordinary mechanisms of genetic variation, possibly influenced by other factors such as disease or environmentally induced deficiencies. They could have developed abnormalities as a result of chronic nutritional deprivation or pathological process, or simply through mutation and reproduction within a limited gene pool. But in no case does some sort of unique evolutionary path up the fictional human evolutionary tree need to be resorted to for explanations.

From biblical history we understand that all people are descended from Noah’s family, their descendants having dispersed from the Tower of Babel in the centuries after the global Flood. And regardless of the various names evolutionary anthropologists insist upon assigning to various groups of humans—Homo floresiensis, Homo neanderthalensis, Homo erectus, and so forth—they are all just as human as we Homo sapiens are.

But how did these people come to be so very small? Kaifu suggests insular dwarfism may be the explanation. Lead author Daisuko Kubo says their model shows that, “contrary to expectations by some researchers, it is possible that large-bodied Homo erectus migrated to a solitary island and evolved into Homo floresiensis by marked island dwarfism.”5 According to Kaifu, “a popular theory is that big mammals tend to reduce and small mammals tend to increase their body sizes on an isolated island because of energetic demands.”6 There is also a correlation between changing brain and body size for some mammals. For instance an extinct Malagasy hippopotamus and an extinct caprine (a goat-like animal) native to the Mediterranean island of Majorca appear in dwarf insular forms with proportionately dwarfed brains, 30 and 50% smaller (respectively) than the full-size versions.7

Kaifu’s team thinks the same sort of scenario may have occurred in an isolated human population with limited island resources. The dwarf Stegodon elephant drumsticks and other barbecue leftovers, found with the hobbits, and larger-than-usual storks and lizards that were contemporaneous with them suggest that, for whatever reason, changes in the average size of various animals was occurring on Flores, and there is no reason to doubt that some sort of selection pressures may have also favored small size in the people as in the elephants, leading to smaller individuals.

Yet for all this change, elephants were still elephants, and humans were still humans. There is no evidence that the elephants and people of ancient Flores had evolved from non-elephants or non-human ancestors. The tiny ancient people of Flores, whoever their more immediate ancestors were, were still humans descended from Adam and Eve, whom God created in His image about 6,000 years ago. People and animals do vary within their created kinds, and the fossil record indicates that several varieties of humans descended from Noah’s family, with all but the more modern human variation eventually becoming extinct by the end of the Ice Age.