Is evolution churning out smarter cockroaches skilled at evading and escaping your exterminator’s best tricks? Do pest management professionals have a prayer in their battle against these pesky creatures that haunt homes at night? Do the roaches creeping in your kitchen laugh at your roach motel?

Researchers from North Carolina State University have confirmed that many of the ubiquitous German cockroaches common in apartments now spurn the sweets meant to lure them into traps. And they have even identified the neurological wizardry involved.

Eco-conscious exterminators battling home pests have largely replaced their canisters full of poison sprays (which tend to herd roaches instead of just killing them) with baited traps. And because they worked well when first introduced in the 1980s, roach motels from the local department store lurk in the shadows of countless cupboards and closets. But nowadays the common German cockroach—without any learning curve—seems born knowing it should avoid the sweet glucose in the traps.

A few years back Dr. Jules Silverman confirmed that roaches inherit this aversion to sweets. Silverman and colleagues Ayako Wada-Katsumata and Coby Schal, studying the anatomy of cockroach tastes, have discovered their trick. ScienceShot reports, “Now, scientists have figured out how this behavior evolved.”1

The pest control industry, like pharmaceutical companies, must regularly invent new chemicals to battle the enemies of mankind, whether nuisances like cockroaches, the mosquito carriers of deadly diseases like malaria, or the latest resistant bacteria. Natural selection is the friend of these pesky populations. Through selection pressure, those organisms possessing characteristics that enable them to evade the chemical poisons and baits placed in their paths tend to survive. These survivors reproduce and produce entire populations similarly equipped. 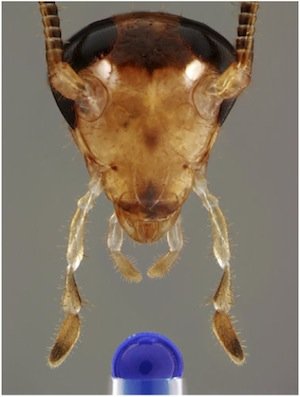 This is the head of a male German cockroach. Taste hairs on the face, antennae, and mouth contain sensory neurons for sweet sugary molecules and others for bitter tastes. The neurons that normally detect only bitter tastes, in many German cockroaches, now “read” glucose sugar as a bitter taste, prompting those cockroaches to avoid glucose-baited traps. Image: Ayako Wada-Katsumata and Andrew Ernst through nyti.ms/12Q9xL4

Roaches have taste hairs—instead of taste buds—all over their bodies. Those near the mouth are equipped with nerve cells sensitive to sweet sugary molecules and other nerve cells sensitive to bitterness. The sweet signal stimulates the urge to eat. The bitter signal promotes aversion to eating. Caffeine is an example of such a bitter substance. Cockroaches don’t want your coffee.

Ordinarily, glucose and fructose sugars stimulate the sweet sensory neurons. But in some German cockroaches, glucose stimulates the bitter sense. The resulting glucose aversion serves the cockroach well, protecting it from roach traps and poison bait. Those cockroaches averse to glucose survive and reproduce, so now much of the German cockroach population resists the temptation of sweet traps. And though the glucose-averse roaches don’t grow and reproduce as robustly as less finicky roaches,2 because they are the ones to survive, the demographics of the roach population have changed. But they are all still cockroaches.

Reporting their work in Science, the researchers write, “Populations of the German cockroach have rapidly evolved an adaptive behavioral aversion to glucose.”3 They write that because the bitter-sensing neurons can now respond to sweets, “a gain-of-function adaptation has emerged, expressing glucose-aversion as a novel behavior that offers protection against toxic baits.”4

Of course what is happening with these cockroaches is not evolution in the molecules-to-man sense. Rather, slight changes have occurred in the genetic information they already possess to make them resistant to the bait. Those with the change are more likely to survive (resist the bait) and become dominant in the population through the process of natural selection. This is clearly not an example of the type of change necessary for cockroaches to develop into a completely different organism.

Researchers don’t yet know the molecular or genetic basis of this alteration in the nature of cockroaches. But nothing about the research demonstrates they are evolving into non-roaches or that any novel genetic information has evolved. Further research may reveal a mutation in the sensory apparatus that can be exploited by the pest control industry.

Such research could help deal with the much more dangerous problem of mosquito-borne malaria and other insect-borne diseases. Dr. Schal says, “The mosquito changed its behavior and no longer rests on walls that are treated with insecticide. Instead it tends to rest on the ceiling, or it tends to rest on the outside walls that are not treated with insecticide. We still don’t understand the cellular, the neural mechanism responsible for this change in behavior of the mosquito.” But when that breakthrough comes, it will not be evolutionary science we have to thank, just the study of variation of organisms in the here-and-now through the principles of experimental science.