by Dr. Elizabeth Mitchell on May 28, 2013
Featured in News to Know
Share:
Email Using:
Gmail Yahoo! Outlook Other

The firestorm that erupted over a Christian school’s fourth grade science quiz was featured Sunday, May 19, in a South Carolina newspaper.

The firestorm that erupted over a Christian school’s fourth grade science quiz was featured Sunday, May 19, in a South Carolina newspaper. Posted to an atheistic forum by the friend of a parent angered that his daughter now disputes the millions-of-years dinosaur tale,1 the quiz was given to students at Blue Ridge Christian Academy in Landrum, South Carolina, to test their comprehension of the Answers in Genesis DVD Dinosaurs: Genesis and the Gospel.

In the DVD, Ken Ham and AiG song-writer/dinosaur sculptor Buddy Davis explain that God’s Word tells us that God created the world in six literal days and that He made all the land animals on the 6th day, the same day He created Adam and Eve, the first man and woman. Since dinosaurs were land animals, they lived at the same time as human beings. And since the original dinosaurs were all vegetarians, that wasn’t a problem. Dinosaurs were created about 6,000 years ago on Day 6 before the creation of man, and since God was the only one present at the time, it is reasonable to ask those who claim dinosaurs lived millions of years ago, “Were you there?” 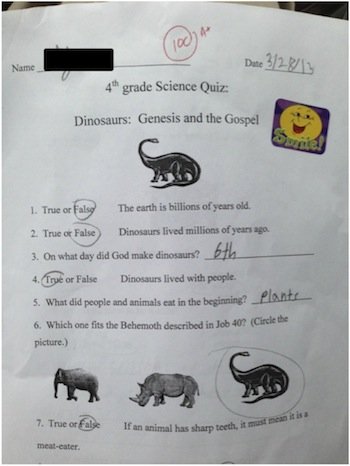 This is the first page of an eighteen-question quiz given at Blue Ridge Christian Academy. The fact that children in a Christian school are being taught dinosaurs once inhabited the earth at the same time as human beings unleashed a firestorm of fury from the atheistic community. The student scored 100%, answering the final question “The next time someone says the earth is billions (or millions) of years old, what can you say?” correctly with “were you there.” Image from Snopes.com.

Photos of the quiz went viral and elicited thousands of comments, many quite nasty. The newspaper reports, “School leaders were called child abusers, brainwashers and ignorant. One person said they wanted to chop off [school director Diane] Baker’s head while another said they hoped the teacher would die a horrible death.”

Baker says the school does teach students mainstream science but does so from a biblical perspective. The school does not demand that students or parents agree with their worldview. “We are teaching kids how to think. Part of what we do in every class is to teach kids to articulate what they believe,” says Baker. “Our students are well versed,” explains board member Joy Hartsell. “They know evolution. The big bang theory. They are taught what the world believes. We believe the Bible and we teach from that context.”

The small K-12 school is accredited. This year’s eight graduates have places secured in public and private colleges with career plans including medicine, missions, and education. But like many similar schools, Blue Ridge Academy struggles with finances, recently announcing it would soon close due to lack of funds. Ironically, the recent publicity may help bail the school out of its current difficulties. Unexpected donations totaling about $10,000 have arrived to be applied toward the $200,000 needed to open the doors next fall.

Hearing about the donations, the person who posted the quiz said, “Unintended consequences of bringing their shenanigans to light, but I don’t care.”

Teaching kids in a Christian school that the observable facts of science affirm the biblical history of life’s origins, however, is not “shenanigans.” Teaching kids to critically evaluate the unverifiable assumptions used to glean millions of years from radiometric dating methods and to impose them on the fossil record is not “shenanigans.” Teaching kids to discern the difference between what can be observed and tested in the present and what can only be assumed about the untestable past is not “shenanigans,” but it might be likened to showing them the “evolutionary emperor has no clothes.” Surely the job of an educator is to teach kids to evaluate what they are told—even what they are told in the popular media and in textbooks based on the interpretations of mainstream science.

One person responded to the fact students were being taught to evaluate the millions of years claims in the light of biblical history by commenting, “I went to a school like this in South Carolina. Now I’m a college professor who spends his days trying to undo the damage this rubbish has done.” What this professor calls “damage,” however, is nothing more than a commitment to accept God’s account of how and when He created the universe instead of man’s version of events no man witnessed. And faith in God’s Word is “damaging” to the positions of those fallible human beings who shake their fist at God.

Yet as we discussed recently, physicians, who use experimental science in the form of data from observation and clinical trials every day, have no need for evolutionary claims. In fact, evolutionary beliefs historically have led to significantly wrong treatment strategies.

I too attended a small, financially struggling Christian school in South Carolina four decades ago. In those days, there were no materials available from textbook publishers or from ministries like Answers in Genesis to help teach these critical thinking skills. And, like many churches, some teachers simply chose to ignore the topic of evolution. I, for one, though considering evolution irrelevant, spent many years simply assuming theistic evolution must be true before finally stepping back to take a careful look at the incompatibility of Scripture and evolution as well as the insupportable tenets of evolution. As data presented in Already Gone has shown, children’s needs for critical thinking skills and discernment are best served by teaching them the claims of both evolutionists and creationists while demonstrating how the facts of science affirm Scripture.

Molecules-to-man evolution rests on worldview-based interpretations of scientific data and imaginative story-telling about the past.

Experimental science must be observable, testable, and repeatable. Evolutionary claims about our origins are not, and evolutionists cannot provide objective evidence for its fantastic claims. Molecules-to-man evolution rests on worldview-based interpretations of scientific data and imaginative story-telling about the past.

Thus, the epithet of “shenanigans” might well be applied to evolutionary claims and to the strategy of preventing children from learning how to critically evaluate them. But there are no “shenanigans” afoot among those who teach children in a Christian school that the Bible is true and trustworthy.

And just why are the age of the earth and the origin of life questions of eternal significance? Simply this: if the history in God’s Word cannot be trusted from the very first verse—then how can the claims of Jesus Christ be trusted? Jesus Christ is the Son of God who came to die in our place to redeem us from sin, save us from hell, and restore us to a right relationship with God, who loves us.

Teaching children to doubt what God’s Word says about our origins—and especially the origin of sin and guilt—undermines their understanding of why there is death and suffering in the world. Most importantly, casting doubt on the true origin of sin undermines the logical connection between the first Adam’s sin, our own sinful natures, and the redemptive work of Jesus Christ. Yes, a person can be saved without believing that God created in six literal days, but a foundational understanding of why we need to be saved is rooted in the historical origin of sin in a real Eden. But because many who lack an understanding of the historical underpinnings of the Gospel message eventually reject it, it is vital that parents, Christian educators, churches, and individual Christians understand that the actual facts of science confirm biblical history.

See “Families: Let’s Use the Recent Atheist Attack to Teach More Kids the Truth!” for a fun family activity with free access to a dinosaur video as well as the test that has created such a controversy.